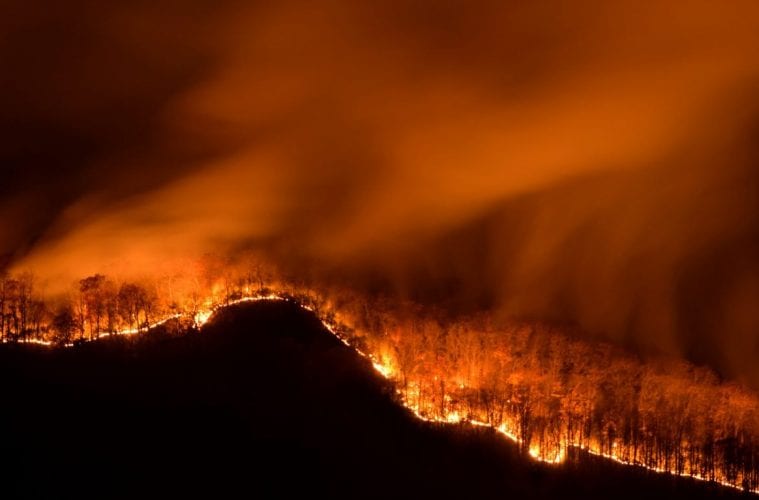 After surviving wildfire, the Hambidge Center fights to get back on track

Editor’s disclosure: Donna Mintz is a grateful Hambidge Fellow who knows well the gifts of the Hambidge Center. Some of the descriptions of place in her story were culled from The Hambidge Center: A Creative Sanctuary 80 Years in the Making (2014), a book she co-edited.

As executive director of the Hambidge Center for the Creative Arts & Sciences, Jamie Badoud wears many hats. Among them are leader, organizer, fundraiser, cheerleader, supporter and visionary, but until the Thanksgiving week fires in north Georgia when Hambidge found itself in the path of the wildfires that ultimately ravaged over 40,000 acres in Georgia, Tennessee and North Carolina, who knew that his role as soldier would be so valuable to the job?

Luckily, Badoud’s eight-year tenure as soldier medic in the Army Reserves prepared him for the prioritization and emotional remove required for the daunting task of preparing the historic center not just for evacuation, but for the possibility that its buildings and wooded grounds could be lost to the fire that now posed such an imminent threat. “The fire,” he says in a recent interview with ArtsATL, “gave new meaning to the words ‘fire drill.’”

The Hambidge Center, one of the oldest and most loved residencies in the country, is a natural sanctuary nestled on 600 pristine acres in the Blue Ridge Mountains of north Georgia near Rabun Gap. Founded in 1934 by Mary Hambidge as an artists’ enclave and sustainable farm dedicated to local traditions and craft, she put into practice the theories of her late partner Jay Hambidge whose concept of “dynamic symmetry” linked nature’s symmetry with the beauty of human art objects. A visionary herself, she led an initiative in which local women helped raise and shear sheep and card and spin the wool into thread to create on site the fine woven goods that were sold at Hambidge’s store on Madison Avenue to benefit the foundation.

Mary Hambidge lived by the guiding principle that creativity is best nurtured by working closely with nature. Any visit today ensures that after more than 80 years, the Hambidge Center has upheld her vision, meeting year after year Andy Warhol’s credo that “having land and not ruining it is the most beautiful art that anybody would ever want to own.”

With seven miles of hiking trails, an incredible biodiversity of native plants, meadows, streams and magnificent cove forest, as well as 18 structures on the National Register of Historic Places, including the working gristmill from which the fire could be seen as a molten necklace on the ridge above the property, there was much that was tangible and irreplaceable to be lost to fire.

The prospect of crippling devastation to Hambidge’s historic buildings and natural beauty presented a tragic and unimaginable loss, but for Badoud the acceptance that came after he had done all he could humanly do to protect it all arrived as one of the fire’s greatest lessons: most important, he says, was not necessarily the tangible to be found in Hambidge’s historic buildings and artifacts, and maybe not even in its natural beauty, though both are integral to the Hambidge experience. What really mattered to Badoud was the knowledge that Hambidge would have been rebuilt — “the fire would come and go but we would carry on.”

The week before that critical week of Thanksgiving, with notice of the potential path of the fire, Badoud and staff removed historic documents and artifacts from the site that included Mary Hambidge’s weaving looms and other pieces of precious furniture, pottery and books. 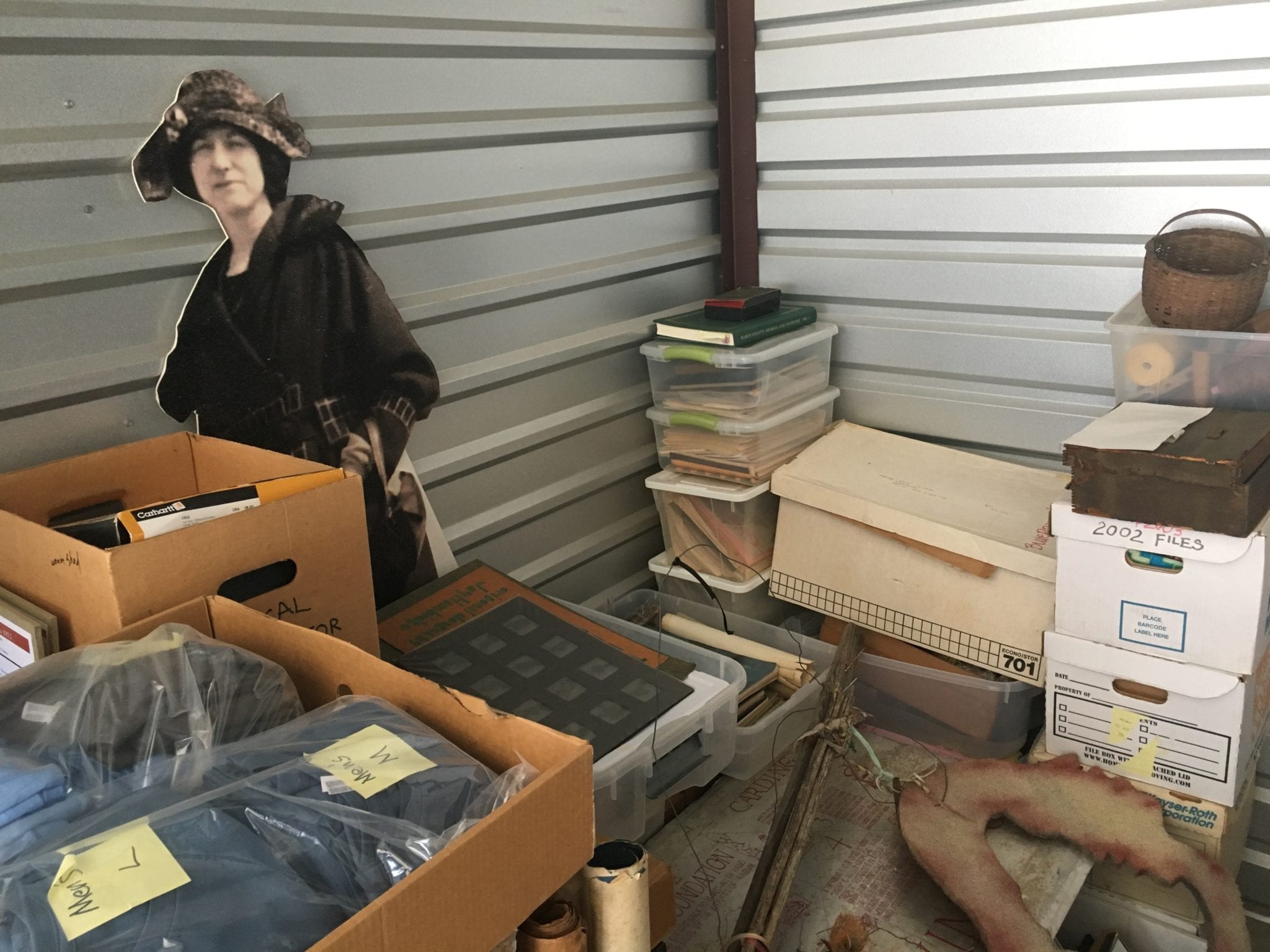 A cut-out image of Mary. (Photo by Jamie Badoud courtesy of the Hambidge Center.)

It was in one of those books that he found the re-inspiration he needed. Among the hundreds, if not thousands, of books given by “writers who have sunk their souls into them” now shelved in the home that was Mary Hambidge’s, he found a dedication that offered special comfort and assurance in the knowledge that all would be well, regardless. Not long after Badoud began his tenure as executive director in the summer of 2009, poet and Hambidge Fellow Sean Hill left his book of poems, Blood Ties & Brown Liquor, with an inscription to Jamie and the Hambidge Center:

“Thank you for the support. Here’s to the memories that sustain us.”

Badoud was reminded then, at a time when he especially needed it, of something he already knew: the most important component to be found at Hambidge is the sustenance that people  — artists across a breadth of disciplines, from dance, music, theater, visual and literary arts, science, whether locally, nationally and internationally — take from a residency here. A sustaining sense of purpose ensures that Hambidge lives in them and in their work wherever they take it. “The beauty of that is that what’s most important [about Hambidge] carries forward,” he says,” so that Hambidge is growing in new communities across the world.”

In addition to historic artifacts, Badoud had to orchestrate the removal and relocation of livestock (returning to Mary Hambidge’s original dream, Hambidge now has sheep and chickens) and a full complement of residents. 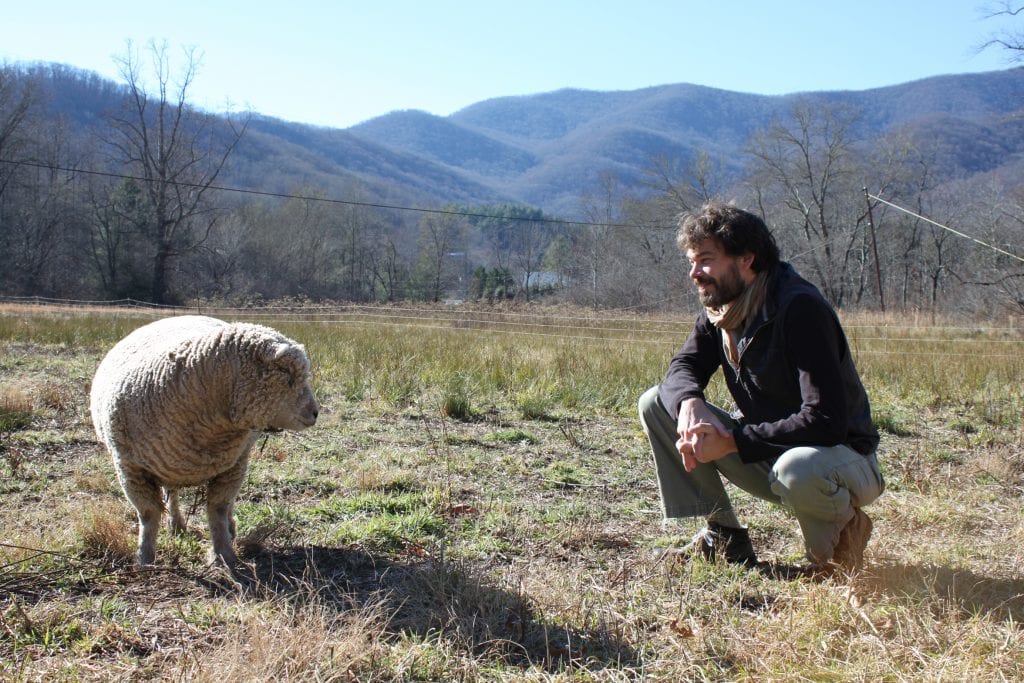 Badoud with one of the residency’s many “residents.” (Photo by Dayna Thacker courtesy of the Hambidge Center.)

Badoud had been assured by officials that, with the fire seven miles away and moving a half-mile a day, he had at least fourteen days before the fire reached Hambidge grounds. Devoted staff were at the ready, helping protect Hambidge even when their own homes were threatened. Board members and other Hambidge supporters stepped up with offers of space and labor, and within a matter of days everyone and everything was successfully placed out of harm’s way. Residents were housed in the nearby homes shared by generous board members, and valuable or historic artifacts were placed in a donated storage space in nearby Mountain City. On the Friday before Thanksgiving, after a week of moving things, Badoud learned he would have to move people as well. When he received the word from trusted lifetime Rabun Gap resident and board member Sarah Gillespie that she could see the fire on the ridge as she stood near Lucinda’s Rock House, the heart of Hambidge, he knew his decisive moment had arrived, and much sooner than he expected. He alerted the residents then that it was time to go, but even when given the chance to leave that Friday or wait until morning, all of the residents stayed the night. Hambidge is that kind of place.

Jennifer Garza-Cuen, one of those residents, had this to say:

FIRE. There was a fire. Everyone at Hambidge had their lives turned upside down, and yet, with signature grace residents were moved to comfortable homes, and with some diligent firefighting and a bit of luck, the danger passed . . . Hambidge is such a special place and it is run by amazing people . . . I’m so very thankful for all the work they do to make sure this beautiful sanctuary of creative energy continues to bring people together.

Hambidge does bring people together, and Badoud feels so fortunate for “the windy road that brought him here” as well – from artist to soldier medic to accountant to the helm of the then-struggling Art Papers magazine, which he turned around, to the sabbatical he took for himself when his wife Stefanie was awarded a coveted fellowship on behalf of CARE to Sierra Leone. Timing is everything, for he came back from his time away renewed and receptive to the directorship that Hambidge offered to him shortly after his return, believing now more than ever the story of Mary Hambidge, “an endless treasure trove of inspiration, wackiness, commitment, [that] inspires others to do better in the future than we can do now.”

And, now that the fire danger is behind him, doing better in the future is where he is placing his tireless efforts. Hambidge continues “to look for ways to support dynamic creative projects that engage the public outside of the normal art venues.” This spring, from March through May, Hambidge will present the Hambidge Creative Hive Project, a new kind of art experience inside and outside of Colony Square that will include its signature Art Auction and Performance Gala, which was held at The Goat Farm in recent years. Artists, artists collectives and arts organizations will have the opportunity to transform empty retail spaces into working artist studios and project spaces in Colony Square with an emphasis on cross-pollination among artists of all disciplines including chefs and scientists – something Hambidge does best.

Closer to home, Hambidge is launching a new collaborative residency space in 2017 and is currently designing exciting new multi-use dwellings to support growing workshops. A new site-responsive installation artwork on the Hambidge property (including a $2,500 stipend and a month-long residency for the Hambidge Fellow selected) will debut at a celebration of the total solar eclipse on August 21. Incidentally, Hambidge is positioned to be one of the best places on earth to see this celestial stunner.

Fortunately, though danger was imminent, the Hambidge Center was spared the devastation of a forest fire, but the added and unexpected out-of-pocket costs as a result of the evacuation of around $3,000 hurt the center’s already close bottom line. It will take more work before everything is again as Badoud wants it to be, but he is so grateful for the organization and teamwork of the over 500 firefighters and for the crews who manned three bulldozers and four helicopters to guide the fire with controlled burns that protected both Hambidge and nearby residents. He is grateful to the indefatigable Hambidge staff and to the board members, fellows and other friends of Hambidge who helped in any way they could. He is grateful for the winds and the rain that provided ultimate relief, and perhaps just maybe, he is grateful to the protective spirit of Mary Hambidge herself. Just as forest fire offers hope for renewal of mature forests by creating an environment more hospitable for regeneration and growth, Jamie Badoud with an attendant respect for Hambidge’s precious past, is directing his efforts toward ensuring the same regeneration and growth for the place he dearly loves. Mary Hambidge would appreciate that.