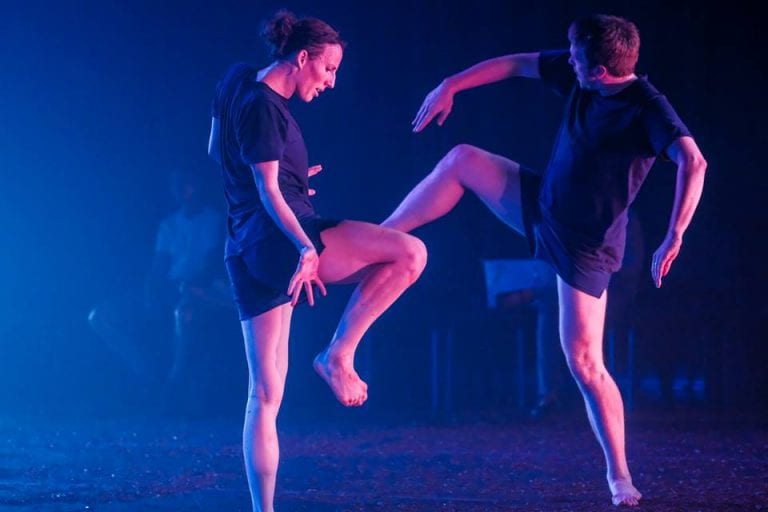 In his new work, Moat, choreographer George Staib delves into memories from a conflicted time in his childhood — when his Armenian-American family relocated from Iran to the United States during the Iran Hostage Crisis.

As a 10-year-old, Staib was pulled out of a life-threatening situation only to face anti-Middle Eastern sentiment in the small Pennsylvania town where his family settled. Misguided locals threw tear gas into the family’s yard; Staib and his sister faced relentless bullying in school.

The evening-length work, presented by Staibdance Friday and Saturday at Emory University’s Performing Arts Studio, carried that personal narrative to the realm of pure, visceral emotion and abstract patterns, grappling with ideas surrounding human assimilation: what aspects of culture must immigrants throw away in order to fit into the dominant culture, and what essential elements can they not afford to lose?

A strong company of 13 dancers performed the hard-driving, emotionally intense work. It was a large group for the intimate, in-the-round performance space. At times, the business of manipulating them in formal patterns diminished a potentially deeper expressionistic message. But Moat presented a compelling exploration that reflected Staib’s deep and persistent inquiry. And Moat showed that the group of committed and highly skilled Atlanta artists that surround Staib has grown in number, group cohesiveness and overall artistic quality. [Full disclosure: George Staib occasionally writes about dance for ArtsATL.]

Staib’s distinct movement style is influenced in part by the sense of breath, weight and expressiveness of modern dance; the patterns and precision of color guard work; and by Gaga and release techniques Staib studied in Israel. It is perhaps these rich sources — and Staib’s insistence on an original vocabulary for each new work — that has attracted such dancers as the riveting Sarah Hillmer and beautifully focusd Sean Hilton.

Moat’s language was fueled by energized tension, of solos and duets playing against groups of three or four; of arresting unison moves, such as the group’s sudden collapse, lined up at one end of the stage, face down onto a floor strewn with red rubber mulch. (This recalled the dirt-laden stage in Pina Bausch’s Rite of Spring.)

The music often created a threatening atmosphere with moments of relief, such as the sounds of two women singing in harmony or the soft voice praying, like a holy presence overseeing the struggle between venturing forward and holding back.

Displaced from the usual Schwartz Center for Performing Arts, the audience sat on three sides of the large black box theater space; black panels lined the fourth side. Above the panels, a raised platform gave dancers a higher vantage point.

A cone of light — made visible by fog — made its way onto the black Marley floor. Eerie voices echoed, gliding in and out of dissonance, as Hillmer began a language of impulses as if viscous fluid poured around the joints and muscles. Hillmer journeyed forward with a sense of pleasure and unfettered selfhood.

The red mulch began to rain down around her, as dancers on the second-story platform threw handfuls of rubber shreds onto the floor below. They moved in crisply alternating lines, shifting like interchanging warp threads on a loom. Handfuls of mulch rained down on Hillmer with rhythmic regularity.

Below them, Hillmer punctuated her motion with intermittent stops, introducing a defining motif of back-and-forth tension: a struggle between the need to venture forward, and the reverse impulse to restrain or protect. The idea multiplied as the ensemble of 12 filed onto the stage floor, continuously interweaving forward and back in a horseshoe formation around the perimeter.

As Hillmer’s long strides wavered in and out of control, dancers flung buckets of mulch onto the floor and scattered it, as if transplanting identity in a foreign land.

Deep, pelting tones in the electronic score created a sense of a menacing threat. Dancers, sitting back on their hands, looked upward, fearful, as they shuffled around the space. Later, couples formed; one person halted the other’s progress with gestures alternately protective and restrictive — at one point, sliding backwards across the floor in a cross-chest carry water rescue.

Embraces morphed into physical struggles. One dancer would wrap an arm around another; a protective gesture that often slipped into forceful control. Bodies filled the space with urgent motion driven by an undercurrent of fury.

In an atmosphere of impending threat — deep sounds like giant pistons moving up and down; to the sound of voices saying, “Halt” — groups of three and four dancers would stand in startled attention. They crouched defensively on the floor, and then made long, low strides, clasping themselves in self-protection. All over the space, dancers reached out to touch another’s shoulder — these gestures quickly became shoves that propelled them into sailing overhead lifts.

The commotion ceased at one point, dancers lined up on one end of the space and fell flat on their faces onto the mulch-strewn floor. A radio broadcast of Ayatollah Khomeini played and as he rallied a crowd with an anti-American chant, the group traveled across the floor to the opposite side of the stage. Tension broke, and dancers arrived at a state of repose, balancing on one leg, the other suspended behind with arms outstretched like a bird in flight.

This transcendent moment quickly returned to the urgent, driven motion, and Moat ended inconclusively with dancers gathering and scattering mulch all over the floor. But the piece demonstrates how Staib’s relentless inquiry and rigor brought out the best in many of the city’s finest contemporary dancers, and managed to elevate the standards for local dance. That artists on this level committed their time to Staib is evidence of his rising stature as one of the community’s most sharp-witted and innovative artists.