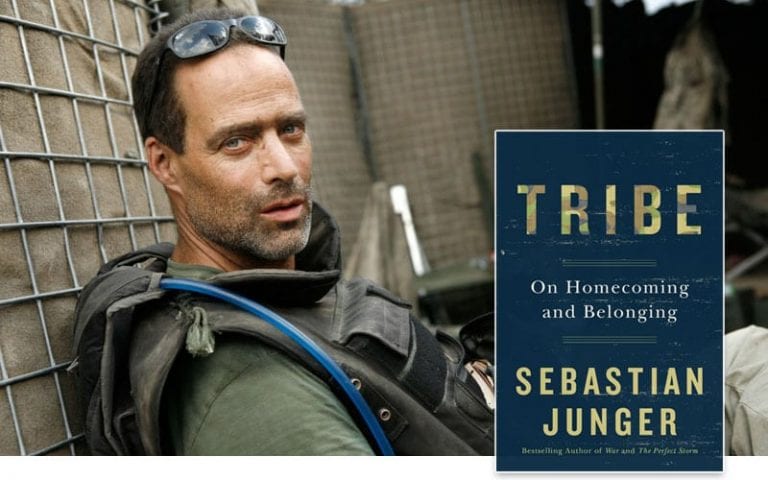 Preview: Sebastian Junger’s unerring focus on loyalty and the human need for community and purpose

Tribe: On Homecoming and Belonging (Twelve, 192 pp.) opens in the fall of 1986 as Sebastian Junger is hitchhiking cross-country solo. Raised in an affluent suburb of Boston and a recent graduate of Wesleyan University, Junger was bored with the sheer predictability of his American life and looking for a way to test his mettle as a young man. Instead, he got schooled on the fundamentals of brotherhood, nobility and grace when he crossed paths with a homeless man in Gillette, Wyoming.

After asking where Junger was headed and how much food he had in his backpack, the man said, “I saw you from town and just wanted to make sure you were okay.” He then handed over a bologna sandwich, an apple and bag of potato chips — the entire contents of his black lunch box.

“What this guy did surpassed just about anything I’d ever seen anyone do in much more educated and wealthier classes,” says Junger in a phone interview. “His going out of his way to help a total stranger demonstrated a core principle of the tribal ethos: to help those people in your community that are in need, and gave me a very high ideal to shoot for for myself.”

Thirty years later, ideals like loyalty, inter-reliance and cooperation are still at the forefront of Junger’s mind as a war reporter.  These virtues will be the focus of his conversation Bill Nigut at the Carter Center on Thursday, June 9. Their talk will be recorded live for Nigut’s program, Two Way Street, on Georgia Public Broadcasting.

Tribe revisits themes from an article Junger wrote a year ago for Vanity Fair, where he is a contributing editor. A starting point for a much broader exploration of the human preference for community and what happens when we lose it in modern society, the article triggered a very positive response from all quarters.

Civilians gained insights on veterans’ claims that hardships often come with blessings, why war might actually feel better than peace and the irony of having fonder memories of disasters than weddings or tropical vacations. Letters from servicemen and servicewomen, on the other hand, were far more visceral. “Wow! That is EXACTLY what we’re talking about. We just didn’t know quite how to say it,” is how Junger sums up responses from the latter group.

As a reporter who has been embedded with U.S. troops in war zones, a special correspondent for ABC News and author of The Perfect Storm, Junger — who was an arborist before an accident with a tree-cutting chainsaw ended his career as a tree surgeon in 1991 —  has put a human face on some of the most high-stress jobs imaginable. In the process, he says he’s learned that “humans don’t mind duress, in fact they thrive on it. What they mind is not feeling necessary.”

In the case of modern-day warriors, 50 percent of whom have filed for post-traumatic stress disorder compensation since coming home, the problem is not so much trauma on the battlefield as it is reentry into a society where platitudes like “I support the troops” are pervasive and utterly meaningless. Returning to a flat job market with few prospects for employment is another major stressor. And fighting for a country that is spiritually cannibalizing itself over disputes rooted in class, race, political affiliation and nationality, according to Junger, is soul-crushing to anyone who has laid their life on the line for the good of the whole.

Still, the most terrifying aspect of transitioning to peacetime is the inevitable termination of a brotherhood: a mutual agreement in a group where each member puts the welfare and safety of the group ahead of their own. In effect, loving other people more than loving oneself.

“Not knowing who they can count on,” says Junger of returning troops, “who loves them or who they can love . . . not knowing exactly what anyone would do for them if it came down to it — that is terrifying. Compared to that, war is [psychologically] easier.”

The phenomenon explains why Brendan O’Byrne (who Junger characterizes as “one of the most traumatized people I’ve seen from the war in Afghanistan”) replied, “Ma’am, I miss almost all of it,” when a dinner party guest asked what he missed most about being a team leader during combat. Likewise, Tribe recalls the testimony of Londoners who said they missed the Blitz  (which killed 30,000 people in the city during World War II) because they were forced to live in such close, communal circumstances with their fellow Londoners: sleeping in Tube stations, helping each other. And it explains why one young woman, who was forced to endure surgery without anesthesia to repair the damage to her leg during the siege in Sarajevo, told Junger, “We miss our lives during the war because we stuck together, we were generous, we were good people and now we’re not anymore because we don’t have to be.”

When Junger wonders if generosity in the midst of war might be balanced by more self-serving instincts in times of peace and prosperity, his suspicion is confirmed by anthropologist Sharon Abramowitz.

Abramowitz, who witnessed the start of civil war in Ivory Coast in 2002, contrasts the close bonds she saw blossom there with the relative alienation of life in Western society. “We are not good to each other [in the West],” she says. “Our tribalism is about an extremely narrow group of people: our children, our spouse, maybe our parents. Our society is alienating, technical, cold, and mystifying. Our fundamental desire, as human beings, is to be close to others, and our society does not allow for that.”