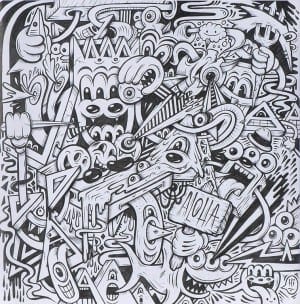 Sprawl! Drawing Outside the Lines is an apt name for the exhibition that has taken over the third floor of the High Museum’s Anne Cox Chambers Wing.

The show represents the expansion of an acquisition program to purchase work by local artists, made possible by the Lambert Fund, a bequest from the late Judith Alexander. The High’s 2013 exhibit, Drawing Inside the Perimeter, presented 44 of the initial 52 purchases, selected by curator Michael Rooks and Marianne Lambert, for whom the bequest was named.

Thanks to a $50,000 gift from the Antinori Fund, Rooks was able to continue acquiring. Sprawl, which runs through October 4, is double the size of its predecessor and has extended its geographical boundaries beyond the Perimeter.

The term “sprawl” might also refer to the show’s diversity. Works include finished drawings, studies for projects in other media, books, collages, oils on paper. They range from cartoon-inspired imagery like Jason Murphy’s boneless, rubbery figures, to the beaux-arts perfection of Christian Bradley West’s tiny trompe l’oeil photographs.

The show’s expansiveness is evident as well in a generational mix that commingles recent art school grads with retired college professors. Lauren Peterson, who deploys a torrent of yarn stitches to make her drawing, Embroidered drawing, drawing embroidery (2014), recently earned her MFA at Georgia State University. Medford Johnston, who taught painting at GSU for 30 years, is represented by one of his Masai pieces, both painterly and hard-edged, from 1988.

This grand embrace exemplifies the spirit in which Rooks has engaged with community since his arrival in 2010. What better way to establish connections with artists who long felt ignored by the museum than to bring their works into the permanent collection? 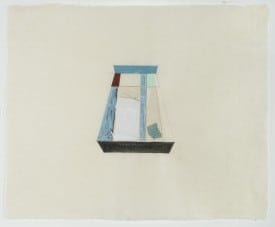 It is likely that he will be the only visitor familiar with all of the artists. Even those deeply involved in the art scene are bound to discover some new artists or be reacquainted with long-time practitioners. I was curious, for instance, about William Cash, who is represented by an intense and painterly self-portrait, and delighted to see a drawing by Elizabeth Lide after an exhibition hiatus of four years — especially on the heels of her recent selection for one of MOCA GA’s Working Artist Project grants.

Unprepossessing but also a bit uncanny, her Swimming Pool Bed points to the spirit of Surrealism that wafts through the show. You can see it in Joe Tsambiras’ eerie Study for Children of Alice II, where children sprout vegetation, and in Angus Galloway’s employment of a device similar in effect to Exquisite Corpse, a chance-based game that Surrealist artists played, to create Finding Series Number II.

Galloway’s forms hover on the cusp of figuration like a half-remembered dream. In contrast to Galloway’s airy indefiniteness, Greg Mike offers a goofy brocade of interpenetrating forms (including sharp points stuck in eyes) and crazed creatures in Aloha, seemingly the product of a seething, adolescent id. (Pictured on the homepage.) Most of the works done in the graffiti/comic book aesthetic strike me the same way: skilled but insubstantial.

Particularly puzzling is Frank Dunson’s comic-book replay of Norman Rockwell’s 1964 The Problem We All Live With, which depicts Ruby Bridges, a valorous six-year-old, enduring slung tomatoes and racial epithets on her way to integrate an elementary school. Rendering the image like a Saturday morning cartoon — where over-the-top violence is clearly fantasy and usually victimless — defangs the image and trivializes the subject. 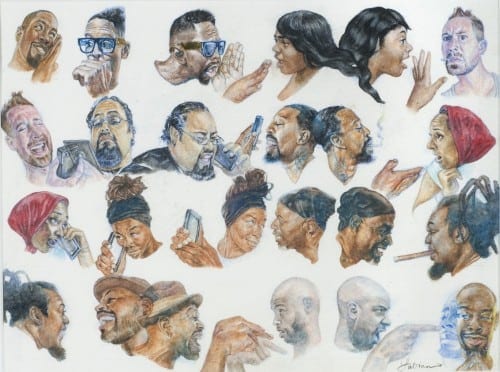 How strange it is to find two references to Norman Rockwell in a show like this. In Gossip, Fabian Williams, who studied illustration and always admired Rockwell, updated his 1948 Telephone Game for the cell-phone age and included portraits of Atlanta artists.

Installing 113 diverse objects is a challenge. Rooks organizes some works thematically. For instance, he clusters drawings with surreal imagery in the back gallery and pairs two memento mori drawings (one by Sanithna Phansavanh, the other by Dorothy Stucki and Bo Orr) in the wedge gallery. Continuing the theme, Untitled (the Queen is Dead), Mark Leibert’s lovely drawing of a dead bee set against a scumbled background that somehow adds to its poignancy. 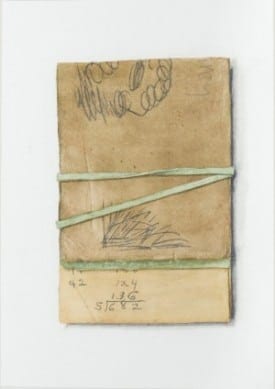 The decision to place small drawings on a triplex of long shelves is understandable as a way to deal with scale and the sheer number of works, but the labeling is inadequate and the pieces seem diminished by the placement.

In selecting works, Rooks decided to go for breadth, which speaks to his inclusiveness. Yet, that approach has its downside, especially when that metric is applied to quality. There are a number of works that could be described as piffle. It’s hard to imagine how or why they’d ever see the light of day again. These lesser works drag down the show and make inclusion less meaningful. Better — for the collection as well as the artists — to have fewer, more consistently accomplished works representing the best of what Atlanta artists can do.

Even for pieces that can stand alone as works of art, it is difficult to know whether and how they relate to an artist’s oeuvre unless one is already familiar with the artist. Fortunately, the High has provided links to most of the artists’ websites, so you can learn more about them if you wish. One tidbit I gleaned is that only 18 of the 75 participating artists were born in Georgia. Surely, that infusion of different perspectives has contributed to the energy that Sprawl exudes.