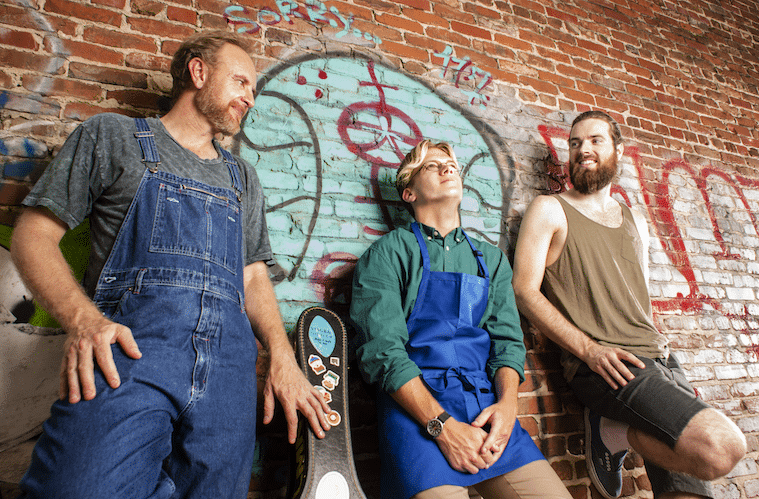 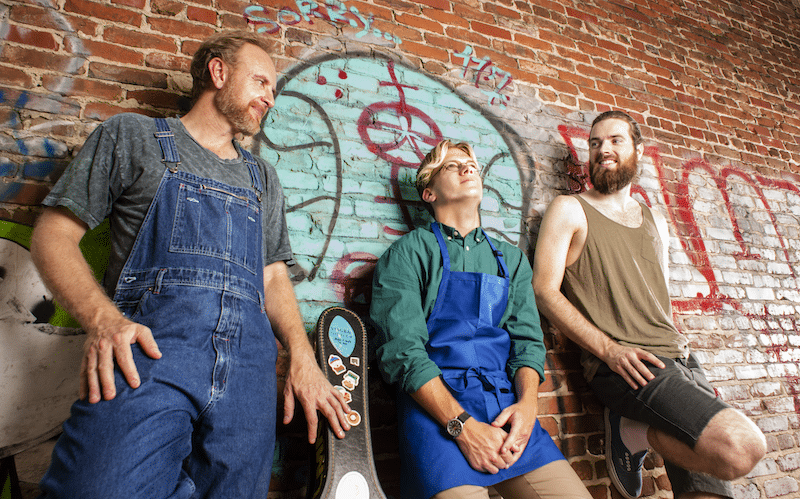 Andy Fleming, Tanner Gill and Grant McGowan (left to right) in an alley behind their coffee shop.

New York’s Annie Baker is one of the nation’s top contemporary playwrights, but you’d hardly know it living in Atlanta. Though she has a Pulitzer and nearly every other major theater award under her belt, none of the big theaters in town have touched her plays yet.

We’re lucky then that the tiny company (the play is staged, literally, in a living room) Pinch ‘n’ Ouch takes on her work, first in a 2011 production of her show Body Awareness and now again with The Aliens, on stage through August 23. (Marietta’s now defunct Theater in the Square, which prior to its closing in 2012 was a reliable place to see interesting contemporary work and classics, staged Baker’s Circle Mirror Transformation in 2011).

Though the city’s big theaters deserve a bit of scolding for skipping her work in favor of more immediately appealing or recognizable properties, it can be said in their defense — and the Pinch ‘n’ Ouch production makes perfectly clear — that her work is something of an acquired taste. Marked by awkward silences, long periods of inactivity and seemingly mundane, inconsequential dialogue, her work seeks to capture something of life in the Samuel Beckett sense.

A playwright’s note in the text of The Aliens says that at least one third of the play should be silent … “uncomfortably so.” The work asks a lot of its audience and performers, demanding that tiny things — the way an everyday conversation in a café can ever so slowly change its tenor and then suddenly lurch in a new direction — be treated as the focus of staged drama. Some theater-goers will be well served by the subtleties; others may wonder if this is some new form of torture that defies the Geneva Conventions.

The Aliens is, like Baker’s plays Circle Mirror Transformation and Body Awareness, set in the fictional town of Shirley, Vermont. This time we’re behind a café where two slacker friends in their 30s hang out at a ratty set of table and chairs near the trashcans discussing poetry, logic, exes and whatever else happens to come up (often nothing does and we sit in silence).

Through little bits of dialogue we begin to pick up on the situation and slowly get to know the nature of the friendship between the alienated and drifting losers KJ (Grant McGowan) and Jasper (Andy Fleming), who has just broken up with his girlfriend.

A lot of what we know about them is drawn out through their interaction with a third character, the young college freshman Evan (Tanner Gill), who has just started work at the coffee shop. He initially seeks to drive off KJ and Jasper, afraid that their presence in what is ostensibly an off-limits staff area will get him into trouble. The pair genially refuse to leave, eventually accepting the timid misfit as a sort of kindred spirit.

The small but mighty cast at Pinch n’ Ouch does a fine job with the unusual work. McGowan, who plays KJ, also founded the company itself and designed the set (busy guy), an impressively credible alley behind a café … in the living room of a Candler Park condo, no less.

I especially admired Fleming’s Jasper; he gives the character a compelling, hefty sense of alienation that comes through with even simple lines. Baker has a great way of finding the surreal in the everyday, my favorite aspect of her work, and the cast does well performing some deliciously peculiar songs from KJ and Jasper’s days as bandmates (one of the names of their ever-morphing band was The Aliens).

But Baker’s weird rhythms can be hard to get precisely right and sometimes the cast falters. McGowan overemphasizes the slightly bullying, practical-joker nature of KJ’s interactions with Evan, and Gill as Evan relies too much on conveying the character’s timidity. It makes the relationship seem one-noted, and it’s a relationship that becomes the play’s central one in act two.

Still, Atlantans curious as to what all the fuss over Baker is about should be glad for a competent, thoughtful production from the always forward-looking and contemporary Pinch ‘n’ Ouch. They may be surprised, however, to discover that at the center of all the fuss is so much uncomfortable silence.