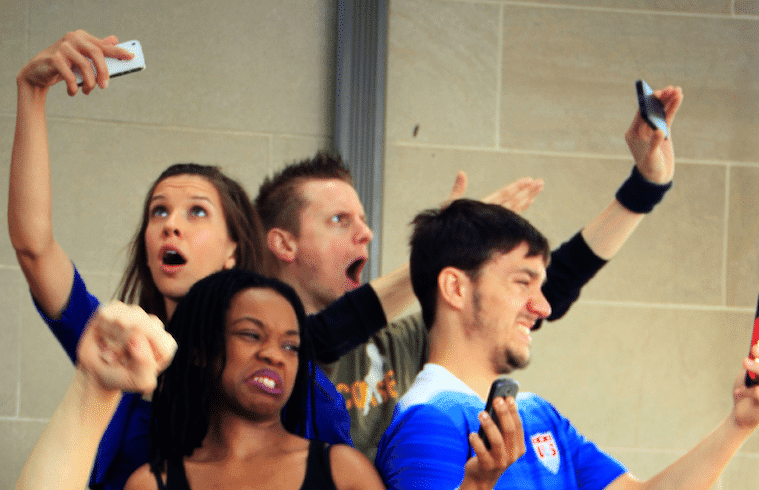 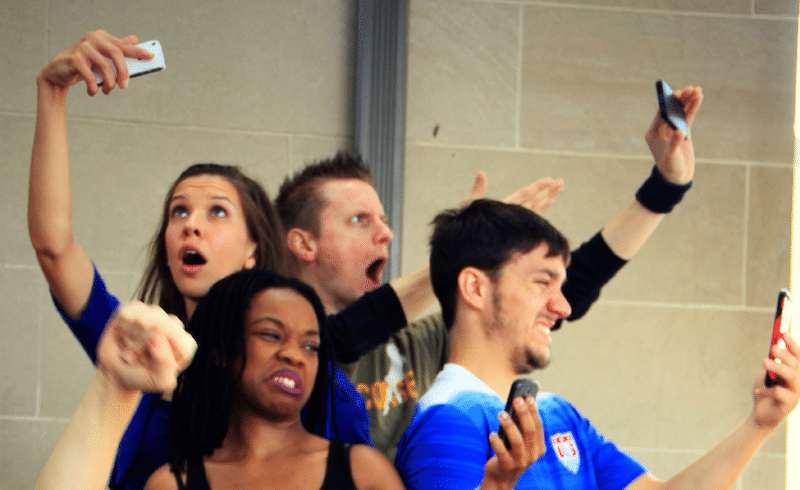 Lilian Likes It explores the false intimacy that online relationships can produce. (Photo by Safaa Sammander)

The precurtain reminder to turn off cell phones can seem a little strange at Lillian Likes It since everyone on stage spends the entire show texting, updating, chatting, tweeting or talking on some sort of device or another. Playwright Joshua Mikel takes aim at contemporary online culture with his new play, in which he imagines what happens when a computer program can sustain someone’s online activity and personality even after death.

The show is one of two world premiere plays with full productions in Essential Theatre’s annual Play Festival, which presents new work by Georgia playwrights. Lillian Likes It runs through August 23.

When the play opens, Lillian (Alyssa Caputo) is not having an easy time of things. She’s just asked for a transfer from the old branch of the Starbucks-like cafe where she works to one that has just opened.

Her new co-worker, Knife (Pat Young), as she discovers, may have an “everything’s cool,” laid-back demeanor in real life, but on the Internet he’s a vengeful punk who makes life at the new job miserable and humiliating for her with his online rants. Lillian also starts to have some troublesome encounters with Babs (Antonia LaChe), the fiancée of a deceased co-worker with whom Lillian had a brief affair. Babs eventually shares the fact that her fiancé, Larry, was secretly in love with Lillian.

Deeply touched (and deeply curious), Lillian activates an online profile at a new site everyone is talking about, one which can aggregate all of someone’s Internet activity and continue posting and chatting, even without that person’s presence. Using the program (called, fittingly, “Lazarus”), she realizes that she and Larry (Ben Silver) were actually a perfect match and she begins to fall for his online profile, which seems to chat and respond just as a real human being would.

Mikel keeps things active and fast-paced. One of the show’s best devices is in the way it conveys online activity on stage through the use of an ensemble of actors. It gives the playwright plenty of opportunity to skewer the politics and vicissitudes of Facebook posts and comments, all of which the cast takes on with wit and energy.

The whole thing moves along with a plucky and fun energy, and it raises interesting questions: When we feel we know someone, how do we know we know them, and when we fall in love, what exactly do we fall in love with?

But as the romance with Larry develops, we start to move into more familiar territory. Though Mikel uses them very well, he employs many of the familiar tropes of romantic comedy: the frustrating job, the adversarial co-worker, the spunky friend who acts as the voice of conscience, the unlikely romantic match, the sweet but clueless steady boyfriend, the silly yoga class.

In the end, though its central romance can feel a little pre-programmed, Lillian Likes It still offers a smart and appealing take on our online activity and identities.