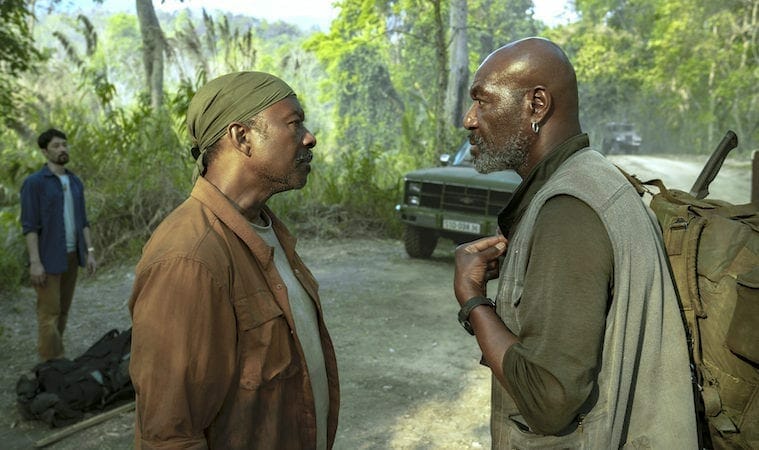 The original 5 Bloods of the movie's title are four Vietnam War veterans, including Clarke Peters (left) and Delroy Lindo, and the buddy they left behind. (Photo by David Lee / Netflix)

Though it was shot long before this spring’s global uprising against how police treat people of color, Spike Lee’s compelling but uneven Vietnam-and-brotherhood drama Da 5 Bloods couldn’t feel more timely. The film is available on Netflix beginning today (June 12).

In one of its flashbacks, set in 1968, news of Martin Luther King Jr.’s assassination hits the radio. As he does in many of his films, Lee interrupts the scripted drama with historic footage. The videos of angry protesters and fires in American streets 52 years ago could have been shot two weeks ago. As William Faulkner told us, and recent history has underscored: “The past is not dead. It’s not even past.”

Like many movies, including Triple Frontier, last year’s Netflix original with Ben Affleck, Da 5 Bloods owes a big structural debt to The Treasure of the Sierra Madre (plus a healthy amount to Apocalypse Now). It’s the well-trod story of friends who journey into hostile territory to uncover a stash of hidden loot. In the process they discover that, while the natives can be bad news, the bigger dangers come from each other when paranoia and greed set in. In modern-day Ho Chi Minh City, we meet veterans Paul (Delroy Lindo), Otis (Clarke Peters), Eddie (Norm Lewis) and Melvin (Isiah Whitlock Jr.), reunited to hike back into the jungle to retrieve the body of fallen squad leader Stormin’ Norman (Chadwick Boseman), who died during a firefight with the Vietcong. In flashbacks, we see Norman and the others who made up the 5 Bloods, in their prime.

Da 5 Bloods alternates between these two time frames, which seem only a heartbeat apart. In both periods, the film’s older actors — men mainly in their 60s — play their 20-something selves without any attempt to hide age lines or white hair. That decision works just fine. After all, deep inside we still feel much the same as we did in our prime.

Oh, one other plot point? In addition to finding their friend’s body, the remaining four are seeking a buried trove of gold bars, worth $17 million. The quest is complicated by the unexpected arrival of Paul’s estranged son David (Jonathan Majors, wearing a shirt from Morehouse, Lee’s alma mater). He wants a cut, but even more, he wants his father’s respect. That hackneyed dramatic trope drives a lot of the movie, for better and, often, for worse.

So does Paul’s unbalanced psyche. Long before he pulls on his MAGA hat in the jungle (yes, you read that right), he’s marked as a man on edge, with an easily triggered rage. Lindo is committed and powerful — especially during a tense market scene when he loses his cool with an aggressive Vietnamese vendor. A little like Jack Nicholson in The Shining, he’s already so hyped up at the start that when he gets scary we’re not surprised. Da 5 Bloods is a movie with a split personality. It’s trying to do too many things at once. Lee’s clear-eyed take on the ways black men are wanted only as long as they’re valuable to the government, then discarded (“We fought an immoral war that wasn’t ours, for rights we didn’t have,” says one character) battles with a dramatic structure that’s familiar and sometimes clumsy. There may be a good reason for that. The four credited scriptwriters include Danny Bilson and Paul De Meo, two white guys best known for the 1991 flop The Rocketeer, Lee and fellow Oscar winner (for BlacKkKlansman) Kevin Willmott.

Plot mechanics are the movie’s weakest element. When one character walks backward, speechifying righteously (think Samuel L. Jackson’s last moment in Deep Blue Sea), you know his last step will be on a land mine. People show up in just the nick of time, and character motivations seesaw. (Paul’s I-love-you-I-disown-you relationship with his son becomes especially tiresome.)

When the finale explodes in a standoff, Bloods becomes like any other overkill, trigger-happy action film — or like the Rambo movies that our guys in Bloods mock early on. And that the film’s survivors can (***spoiler alert***) exit Vietnam with no problems despite leaving dozens of corpses behind them, pitches the movie into the realm of fairy tale.

Da 5 Bloods is well-made and beautifully acted by people at the top of their game (Peters is particularly strong as the group’s calm center). And even a flawed (and, at 154 minutes, way too long) Spike Lee movie is worth seeing. All of them are, even if you just want to wonder what the hell he thought he was doing with embarrassing bombs like She Hate Me or ambitious, weird provocations like Bamboozled. He’s great as a craftsman working on more mainstream material (Inside Man, The 25th Hour). But Lee is at his best when he’s shooting high at the risk of coming up short. Da 5 Bloods is a midway effort, but its moment is now, and 50 — and 400 — years ago.