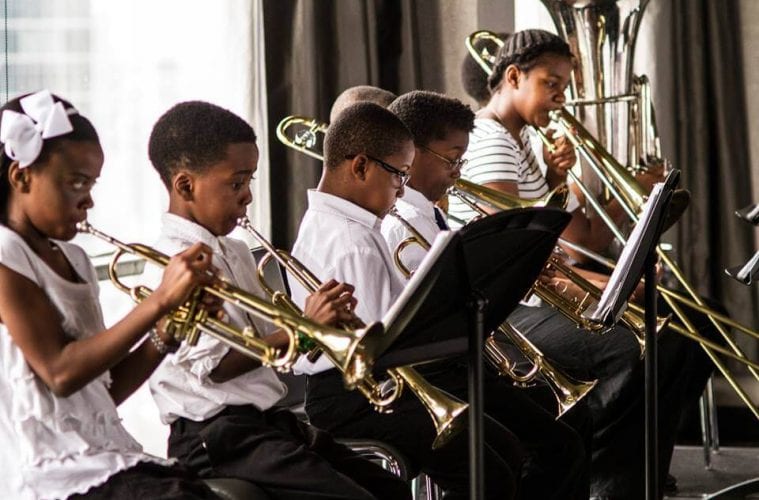 The Atlanta Music Project was one of 30 arts organizations that signed a letter to the Community Foundation for Greater Atlanta after the first round of emergency Covid-19 grants did not include any black arts groups. (Photo by Anthony Alston Jr./Solidarity Films, courtesy Atlanta Music Project)

More than 70 leaders from black arts organizations met Wednesday afternoon with officials from the Community Foundation for Greater Atlanta and reported progress in their call for deeper investment in groups led by people of color.

“The meeting was well received, both from the Community Foundation and from those who participated,” said Heather Infantry. “That was great. There were over 70 folks on the call.” Infantry, who helped organize the meeting, is executive director of Generator, the organization founded by Ryan Gravel, the urban planner who conceived the idea for the Atlanta Beltline. Lita Pardi, the foundation’s director of community, said in a statement she was encouraged by the dialogue. “Thank you to the leaders and founders of black arts organizations for our time together. We recognize the vital role of black arts in the rich fabric of Atlanta’s vibrant creative scene and look forward to working with these representatives in our support of nonprofits towards equity in the arts arena.”

The Community Foundation — which oversees the Metropolitan Atlanta Arts Fund — recently handed out $580,000 in emergency grants to arts groups in response to the Covid-19 pandemic. Only one black arts organization applied, and no black arts groups received initial funding. And, according to black arts leaders, just 13 percent of the Arts Fund grant monies have gone to black-led organizations since the fund was established in 1993.

There is a pool of nearly $2 million in emergency funds from the foundation to allocate to arts groups. As concerns from black-led organizations came in after the initial round of emergency grants last month, the foundation said it was going to review its grant application process.

The foundation originally planned to offer revised guidelines by June 15 that are intended to open up their process for the remaining rounds. That date may now get pushed back after Wednesday’s meeting. “We want to listen and absorb feedback and get it right, even if that takes a little longer than our previously stated deadline,” a foundation spokeswoman said in an email. “We look forward to continuing a dialogue with this group.”

A letter to the foundation last week that was signed by 30 metro black-led arts organizations also cited requirements such as a full-time W-2 employee that “disproportionally disqualify” black organizations. “They not only ignore the chronic underfunding that makes it impossible to afford such deliverables, [they] reinforce the false premise that black arts organizations are incompetent with funds or don’t care to be ‘rigorous’ in their business practices, and are therefore ‘untrustworthy’ as stewards of donor funds,” the letter said. The Community Foundation’s Lita Pardi said she was encouraged by the dialogue with black arts groups.

Infantry said Wednesday’s meeting left her encouraged, yet still skeptical real change will come. “But we’re investing in this effort to push it,” she said.

In the short term, the arts organizations want to see “an equivalent amount” of monies granted in later rounds earmarked for black-led groups. In the long term, the groups asked that a task force be formed that includes black voices to help the foundation put into place its upcoming initiative on equity to combat disparities in economic and social mobility.

Infantry said the group is also going to focus on building public support for economic equity for black arts organizations. “The work we can do on our part is to galvanize support and help people understand why this is needed,” she said. “It’s easier and less risky for the Community Foundation if the public supports it.”

While white-led organizations often have programming that involves the perspectives of people of color, Infantry said, it still comes under the umbrella of the white perspective and experience.