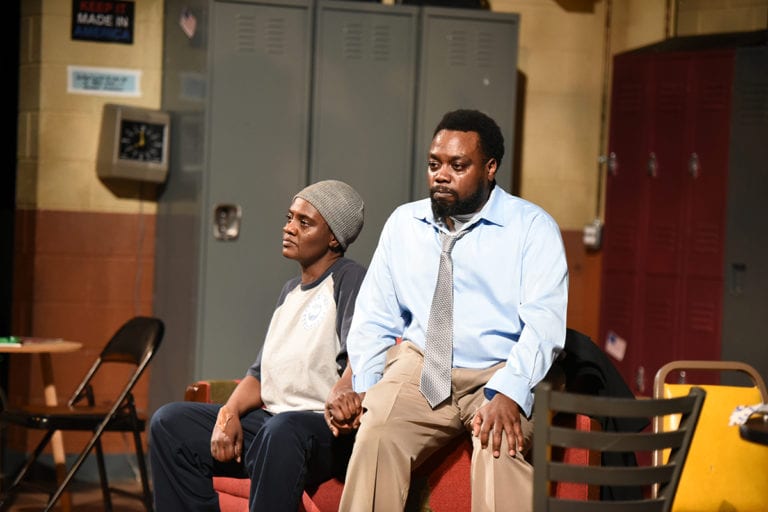 Dominique Morisseau, the 2018 winner of a MacArthur Foundation Genius Grant, has become one of the most produced playwrights in the country. True Colors Theatre Company is staging a fierce version of her acclaimed Skeleton Crew that proves to be a tremendous acting playground for its four performers. See it through March 10 at the Southwest Arts Center.

Directed by Jamil Jude, who in August succeeds Kenny Leon as the company’s artistic director, Skeleton Crew is the third in the playwright’s Detroit Project trilogy (along with Detroit ’67 and Paradise Blue). True Colors did Detroit ’67 in 2015 and will soon take on Paradise Blue.

Set in 2008, at the beginning of the Great Recession, Skeleton Crew follows four African Americans working at a Detroit auto plant. Rumor has is that the plant is going to shut down, but until they hear definitive word, all working as usual. One of the employees, Shanita (Asia Howard, in her True Colors debut), is in her late 20s and pregnant, and the contributions she makes at the plant mean a great deal to her. We also have Dez (Anthony Campbell), about Shanita’s age, street savvy and unsubtle in his flirtations. Reggie (Enoch Armando King) is the foreman, walking a fine line of being friendly with his team while being management.

The center of the play, unexpectedly, turns out to be Faye (Tonia Jackson), a 50ish lesbian who’s been with the company 29 years and faces health challenges. She’s also the plant’s union rep.

Morisseau, also a story editor for the Showtime series Shameless, won a special citation Obie Award for this work. She has crafted a play that seems especially relevant for our time, with workers uncertain about their futures and living paycheck-to-paycheck.

Each character here has layers, and the actors know how to find them. Morisseau’s women are especially three-dimensional. Shanita is very by-the-book in her professional and personal life, doing everything she can to have a healthy child. Howard brings a sweetness and vulnerability to the character. Jackson makes Faye a fascinating presence, observant and unafraid to show the pain and scar tissue she’s developed and tries to hide.

The seemingly unflappable Reggie has a hard time staying composed at times, and King convincingly shows his mounting frustrations, while Dez’s tough guy exterior belies who he really is. Campbell may not have the chops his costars do, but his Dez feels real. The relationships here, foremost between Faye and Reggie, are particularly engrossing.

Jude directs with a fine sense of naturalism. For a drama that takes place in a single location, it moves with ease and is never stagey or overly theatrical, with original music by James Keys and compositions by Chris Lane. Moriah and Isabel Curley-Clay’s reliably efficient set is an authentic-looking breakroom. The snack machine is out of order. There are lockers and signs about meetings and not smoking. The work that goes on at the assembly line is suggested via  projections.

The drama strays a little off course from time to time and never fully resolves its situation but has an overall great sense of place and respect for its characters. Morisseau’s dialogue is almost lyrical at times and touches on such serious themes as class differences, loyalty and ethics but still has its share of humor.

Skeleton Crew is a quiet show that’s more about its four characters than any major plot mechanisms. Morisseau balances it all, giving each room to breathe and interact with each other. It’s an involving, observant play, and in the hands of True Colors, it’s one of the standout productions of the young theatrical season.