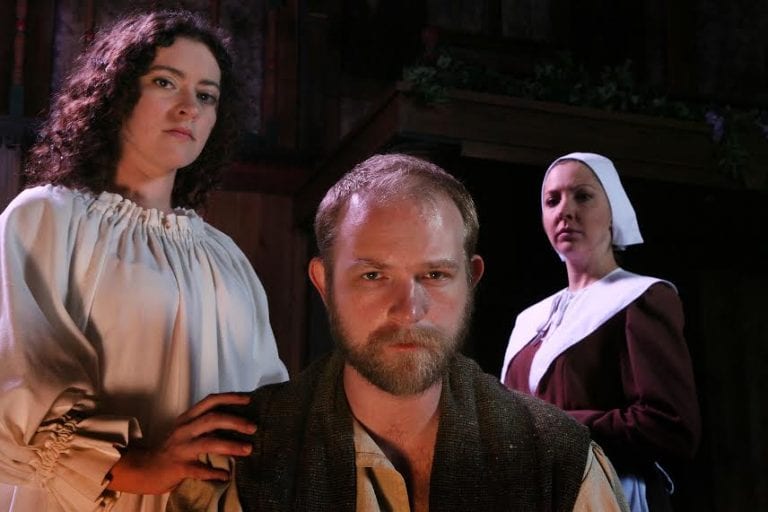 Review: Shakespeare Tavern’s revival of Arthur Miller’s “The Crucible” comes up off the mark 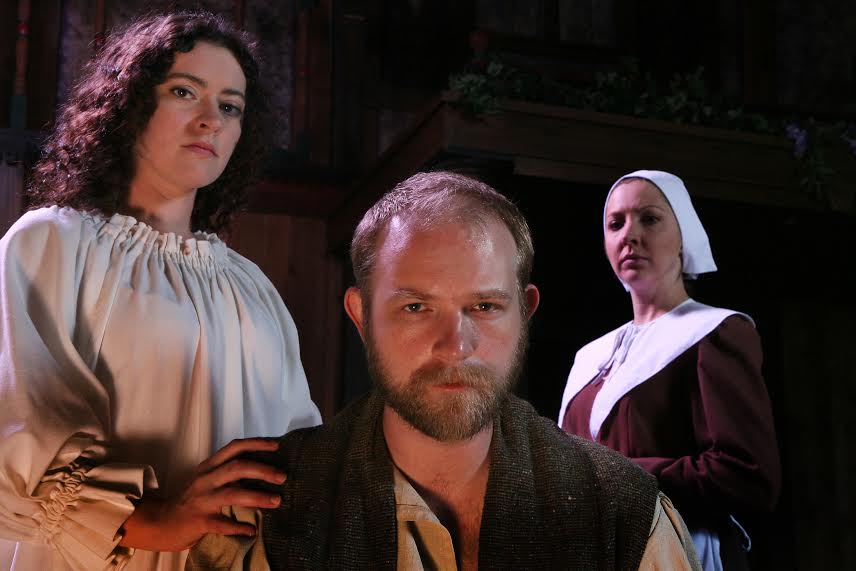 At least once or so a year, the Shakespeare Tavern turns its attention away from its normal fare to stage a classic non-Shakespeare work. Oftentimes it can be a joyous event — several versions of Our Town and A Streetcar Named Desire with Patricia French come to mind — letting the company’s players flex their muscles in work outside of the Bard. The new version of Arthur Miller’s The Crucible, however, seems like a missed opportunity for the troupe.

Playwright Miller wrote the drama, somewhat based on the Salem witch trials, in response to the McCarthyism of his era. It bowed in 1953 and went on to win the Tony Award for Best Play that same year. Over 60 years later, the play still has the power to shock and stir, yet this take, running through November 1 at the Tavern, can’t quite find its footing.

The Crucible takes place in Salem, Massachusetts, circa 1692, where Rev. Samuel Parris (Drew Reeves) is alarmed at his daughter Betty (Hayley Platt), who is sick and bedridden. The night before, he had seen her and his niece Abigail (Rachel Frawley) dancing in the forest along with a slave Tituba (Tetrianna Silas). The townspeople have already started to whisper about witchcraft.

The house is later visited by, among others, John Proctor (Matt Nitchie), a farmer who once employed Abigail before she was dismissed following their improper relationship. Soon speculations are running rampant and townspeople are pointing fingers and turning on their own neighbors and friends. Eventually, John’s own wife Elizabeth (Mary Russell) is carted off to jail.

It’s been well over a decade since the company last staged this work. The 2002 version was taut and well-executed. (Ironically, that was the same year it landed back on Broadway with a cast that included Liam Neeson and Laura Linney.) The Shakespeare Tavern was scheduled to stage The Crucible again last fall, even assembling a cast, but the performance rights were not available.

When the rights did open up, Jeff Watkins, the company’s artistic director, jumped to include it in this season. Watkins directs here and he’s certainly a busy man this season. Besides helming Pericles in late August and Cymbeline in September, he is also playing Prospero in the upcoming The Tempest.

In the program guide he mentions that he didn’t originally intend to put himself at the helm of three consecutive productions. His packed schedule may not have been the ideal gift for this production. This version feels a little flat. It’s almost like a staged reading with costumes.

In an age where Big Brother is watching and with witch hunts/investigations of all kinds happening, it’s certainly a topical show. Yet Watkins gives this little flair — there are no music cues, no lighting effects, no kinds of flourishes.

The text obviously doesn’t need a lot of gimmicks surrounding it to work, but nonetheless this is one of the least theatrical shows I’ve seen at the Tavern. The pacing is off — the first act is sluggish and uninvolving.

To Watkins’ credit, the courtroom sequences in Act II gain momentum momentarily, with some well-acted scenes from the cast, and there’s a nice, haunting climactic moment between John and Elizabeth. The entire ensemble is indeed quite solid, with Nitchie showing a terrific range and Troy Willis impressing as Deputy Governor/Judge Danforth. Anne Carole Butler’s costumes also evoke the era convincingly. Yet it just never comes together.

Those not familiar with Miller’s work might like this — area high school students who attended the performance I did loved it — but those who are more familiar might be a little underwhelmed with this production.