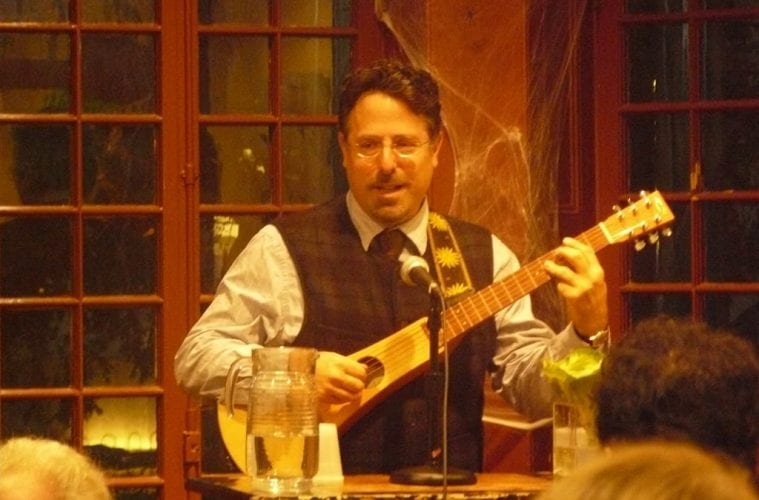 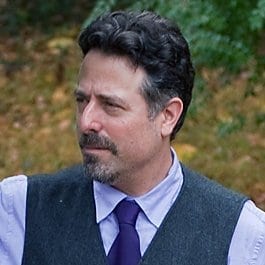 Joseph Skibell’s novels have carried readers through history and epic storytelling. When the Emory University professor turns quietly to the spaces we occupy in real life — as he does in his latest book, My Father’s Guitar and Other Imaginary Things (Algonquin Books) — a wink of illusion and philosophy can be expected.

Skibell will be talking about the new book on Tuesday, October 27 at 7 p.m. at the Margaret Mitchell House.

Although he uses his own life as the basis for the 16 essays — writing about himself and his family (his wife, daughter, father, aunts and uncles all appear) — he shapes them with the sensibility of a fiction writer, and they often have a fantasy element.

Skibell’s real-life interest in guitars provides the motif for the title story, in which he misremembers the kind of guitar his father has given him. Seeing a guitar that his father, recently released from the hospital, has bought for himself, Skibell says, “I remember thinking Man, this is a beautiful instrument!”

Later in the essay, however, when his father gives up trying to play the guitar and passes it on to his son, we read, “Hey, that’s not my father’s guitar! I thought as I pulled up. It wasn’t the guitar I remembered at all, the one shaped like an infinity sign with the nutty brown color.”

After his father’s death, Skibell and his daughter took a road trip that involved visiting three master guitar makers. It was the sort of beautiful but obsessive journey a writer might make, combining memories of his father and his own love of guitars in time spent with his daughter. Notes taken during this ramble led to My Father’s Guitar and Other Imaginary Things.

Like Skibell’s novels, the essays explore what it is to be human. We can be grand and heroic. We can be foolish and petty. Whatever aspect of humanity he explores, Skibell writes about the crucial things that exist only in the mind, such as knowledge, decency, misery, fear and hope. “It occurred to me that imaginary things exist only in one dimension, which is the dimension of time,” he has said. “We say that something is only imaginary, as though it were somehow less than real, but when you think about it, there’s nothing more real than an imaginary thing. Love, for instance…” 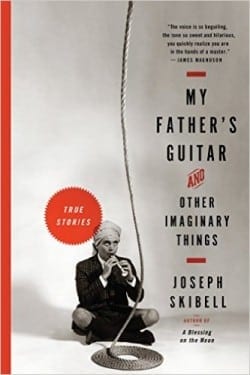 Is it important whether a house truly has the ghost of a suicide or whether a particular type of guitar exists? What is meaningful is how we put our lives together and how we relate to one another; those essential concerns, real and imaginary, are the subject of the essays.

The author has talked about how some artists work within a singular voice, while others are trying something new. He considers himself among the latter. “… I feel about life the way the people of the Great Plains felt about the buffalo: I want to use every part of it. Too much of a writer’s experience falls through the cracks.”

This approach, he acknowledges, is “a little more dangerous for the artist.” Considering his success as a novelist — recipient of a National Endowment for the Arts Fellowship, praise from The New Yorker — turning to nonfiction could have been a “dangerous” path.

But it works. Skibell writes with the insight of a philosopher, conveying his ideas with the beauty of a craftsman.