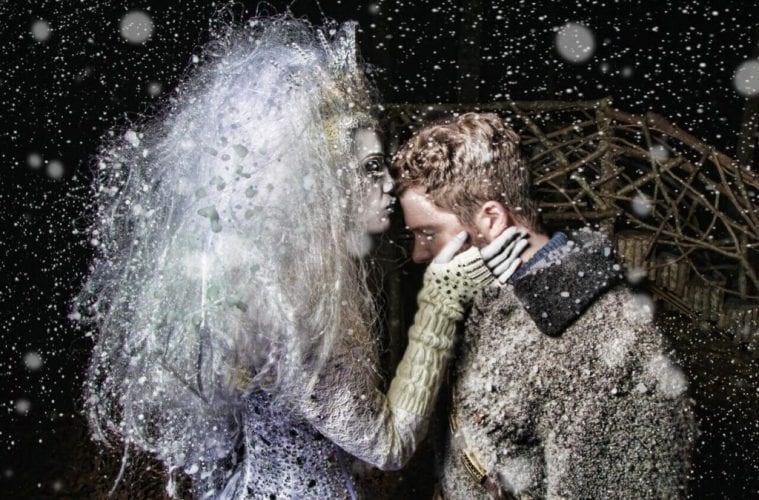 Review: Serenbe’s “The Snow Queen” is a refreshing blast of chilly Christmas air

Disney animators riffed on Hans Christian Anderson’s classic fairy tale The Snow Queen in their big-budget 3D computer-animated 2013 film Frozen, one of the highest-grossing kids’ movies of all time (for a while, it seemed our planet would never again see a little girl who knew when to stop singing “Let it Go”). Serenbe Playhouse’s annual holiday production of The Snow Queen capitalizes on the success and familiarity of that beloved film, but it charmingly returns the story to its roots, sticking more closely to the substance and spirit of Anderson’s somber, dreamlike tale of a girl’s epic winter journey to the icy kingdom of the Snow Queen.

As with any winter journey, you’ll want to bundle up and make sure everyone wears good walking shoes. Like the other productions Serenbe has created under artistic director Brian Clowdus, The Snow Queen is an outdoor, immersive show. This one has audience members moving from place to place through the woods, following Gerda (Casey Shule) on her journey to save her friend Kai (Kenny Tran) from the Snow Queen (Madison Welch).

Clowdus created the show in 2014, and it’s currently under the direction of Serenbe artistic associate Ryan Oliveti. One of Clowdus’ many strengths as a theatermaker is his ability to craft an experience; I typically hate cold, winter evenings when it gets dark so early, and I grow bored and impatient waiting for a show to start, but there’s an appealing wintertime coziness to preshow arrival at The Snow Queen. Theatergoers congregate outside the Serenbe development’s cutesy bookstore, where there are fire pits, s’mores for toasting and hot chocolate (adults who heard “Let it Go” one too many times during the long drive down can even get theirs spiked with a little peppermint schnapps; Clowdus is also a savvy marketer).

When the time arrives, audience members are led to a nearby spot in the woods, and the tale begins in earnest. There’s a lot to like about the performance, but Erik Teague’s gorgeous and evocative costume designs truly stand out. The Snow Queen herself, in eerie white makeup and a lighted costume that seems to radiate icy shards, has an appropriately ethereal, imperious, scene-stealing presence, but I also admired Gerda and Kai in their layers and layers of richly patterned traditional Lappish woven garments.

In the story, Kai falls under the spell of the Snow Queen, believing her to be beautiful after getting shards of a broken enchanted mirror in his eyes and in his heart, and it’s up to Gerda to journey to the Snow Queen’s isolated palace to rescue him (for all the contemporary anxiety about creating appropriate role models for girls in films and stories, this ostensibly old-fashioned, 19th-century tale actually still offers one of the most compelling depictions of a girl’s drive, independence and heroism).

For the most part, what works in the fairy tale works here. But at an hour long, The Snow Queen is pretty short-and-sweet; that’s an admirable, and perhaps necessary, quality in children’s theater. But one of the most enduring qualities of Anderson’s story is its epic feel. Gerda’s journey in the story seems long, dangerous and difficult (I’m willing to wager that Danish parents originally read the tale to children across several nights). In the play, however, things seem easy-breezy, with the various stops and encounters along the way more interesting and fun than scary or challenging. And the final vanquishing of the Snow Queen seems to come too quickly and easily, as well.

Elements such as a prologue, which gives us the backstory of the Snow Queen’s creation, knock it out of the park, capturing a sense of seriousness and wonder that’s rare in children’s theater, but other elements — such as piped-in modern dance music which minor characters groove to comically — create a rockier, uneven, less appealing, facetious tone.

Still, with a little schnapps in your cup, any missteps seem forgivable. A family trip to Serenbe can be a lovely wintertime journey away from all the screens, away from the too many Tiny Tims, Frosties and Santas. It’s a return to tradition that feels like a wonderful, bracing, chilly breath of fresh air.