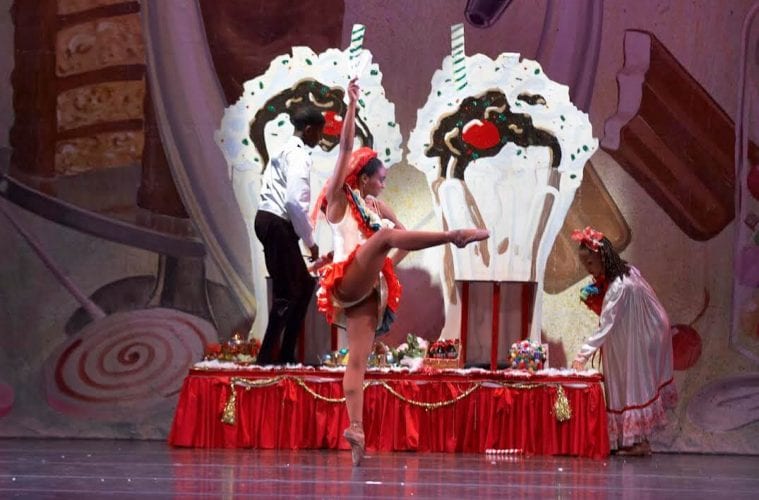 The production, which was performed at the Riverside EpiCenter for the past two years after over two decades at Georgia Tech’s Ferst Center, will be presented December 9 and 10. “It’s a full-circle moment for the company,” said Nena Gilreath, who cofounded and co-directs Ballethnic with her husband, Waverly T. Lucas II.

Gilreath says the plan to return to King Chapel started back in March when Ballethnic was performing at the venue for first graders as part of the Atlanta Cultural Experience Project. “I said to Waverly, ‘Wouldn’t it be great to come back here?’” Still, Gilreath knew it would be challenging with the programming schedule at the chapel, but says they “kept plugging away at it.”

Persistence paid off, but not without concerns about the necessary change in performance dates which resulted. In past years, the production ushered in Atlanta’s Nutcracker season the week before Thanksgiving.

“We utilize freelance artists and were concerned the change in dates might create issues,” says Gilreath. But, so far, she reports that the change has been positive. There weren’t any problems with engaging freelancers, and tickets sales have increased. “Sometimes change is necessary,” she says. “It all worked out.”

Like many things in life and in dance, the Urban Nutcracker was created to fill a need.

Gilreath and Lucas, who founded Ballethnic in 1990, noticed that it was difficult for children in the Atlanta area to be in productions like The Nutcracker if they weren’t enrolled in a dance school. The pair were already using Tchaikovsky’s score for The Nutcracker when teaching dance in housing projects and wanted to create an opportunity for community students to perform. They also wanted to create a production that was culturally relevant and would appeal to people who might not otherwise be drawn to ballet.

They researched the history of Atlanta and realized that the 1940s, a vibrant era for the city, would be the ideal setting for the Urban Nutcracker, and they chose historic Auburn Avenue for the location of the ballet’s Christmas Eve party. “At the time, we were also able to interview people who grew up during that era and ask them about their adventures on Auburn Avenue,” says Gilreath.

With the setting change, they transformed the traditional Nutcracker’s second act “Kingdom of Sweets” into a fantasy of a 1940s soda foundation. Instead of the Sugar Plum Fairy and her Cavalier, the cast of characters features Brown Sugar and the Chocolatier, roles originally danced by Gilreath and Lucas.

“I did a lot of guesting as the Sugar Plum Fairy during my professional career, and the tutus I wore were usually pink,” says Gilreath. “When we designed Brown Sugar’s tutu, we wanted to celebrate hues of brown and fall colors.”

Along with Brown Sugar and the Chocolatier, Act II is filled with dancing treats and sweets such as spice drops and Atlanta’s iconic beverage Coca-Cola. “Coca-Cola is a bubbly, sassy little dance,” says Gilreath. “We thought, ‘Why not use something that everyone knows?’”

There’s also an additional piece of music for the Black Russian dance composed by L. Gerard Reid, who created the score for Ballethnic’s production of The Leopard’s Tale. “Originally, we wanted to recreate the entire Nutcracker score, but it soon became clear that that would be very difficult,” says Gilreath. “But for the Black Russian dance we wanted something pulsating and pumping that would bring out the athleticism of dance and inspire men and boys.”

For Act I’s “party scene,” Gilreath and Lucas drew inspiration from family reunions and the types of personalities encountered at such events. “We wanted the audience to recognize people they knew,” she says. “There are some people who eat too much, some people who drink too much, people who flirt with other people’s companions and people who just come for the food.”

In another full circle for the company, this year’s cast features several soloists who have come through the ranks of Ballethnic Academy of Dance: Laila Howard, Chadrick Jones, Karla Tyson and Terrell Venn. “Seeing them in rehearsal is so amazing for me,” says Gilreath. “This is the crux of why we do this.”

Ballethnic’s inclusive vision of ballet is evident throughout the cast of the Urban Nutcracker, which is multicultural and includes performers of all ages from young students to senior citizens.

“We always wanted to be part of the community and create community,” says Gilreath. “Growing up, Waverly and I were always around a variety of ages — aunts, uncles, cousins, grandparents. Every age provides wisdom. It’s good for young children to see older people in rehearsals and in performances. It shows them that you can move all through life.”

Gilreath likewise believes that artistic directors should be open to a variety of physiques in ballet.