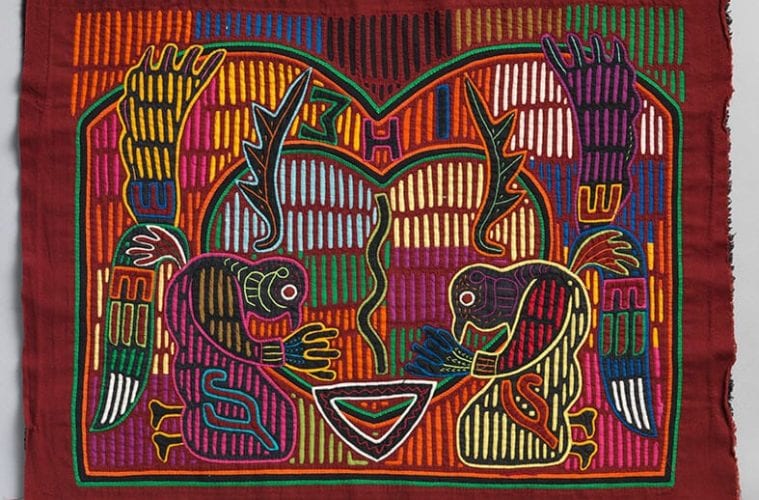 Cullum’s Notebook: On criticism’s lacunae and “Threads of Time”

My editor has asked me to begin producing an occasional roundup of interesting things I see around town, currently called “Cullum’s Notebook” because neither of us has found time to give it a more resonant title. I think it is an excellent, if problematic, idea for reasons I’ll spell out a bit later in this column.

I want to begin this venture with a few out-of-format ramblings that will address an issue seldom discussed outside of the art world, and then discuss a museum exhibition, the Carlos’ Threads of Time, as a case in point. My initial remarks are in response to some recent heated Facebook exchanges, and a few recent conversations with gallery owners.

Every Atlanta publication discussing the visual arts in any depth faces a difficult problem: too many noteworthy shows don’t get written about. Editors do the best job they can with the means available, but there are no art-focused Atlanta publications with a major budget, whether they are print or digital; there are not enough art-informed writers willing to write for the modest compensation compelled by limited budgets; and the ones who are available are forced to spend most of their time earning a living instead of writing about art because peer-review stipends do not pay the rent. Too many shows, not enough review slots or reviewers. Simple as that.

The newspaper for which I wrote back in the declining days of print journalism once tried to solve the problem of adequate coverage by covering the visual art page with a number of snippets about individual artworks that they chose to describe in the caption as “neat stuff.” It was one way of bridging the impossible gulf between art reporting and art reviewing. Forget about art criticism — genuine criticism probably requires more leisure time for reflection than the brevity of the typical exhibition will allow. Provisional-opinion reviewing is the best we can expect outside of print or online journals in which considered judgments are offered about (mostly) long-concluded exhibitions. Whether there is a place at all for snappy, judgment-free reportage is the subject of an ongoing debate.

Just as with everything else, art journalism must deal with a wide spectrum of reader expectations. At one end are the artists and curators who want a piece of writing that will define their show completely, a source of good publicity now and a source for scholarship in the future. At the other end are readers who want to know as quickly as possible whether this is a show they want to go see. If they want to go see it, it is, for them, a good show. This is so even if it’s a show not meant for the ages, just a well-done show for the weekend — “quality” means different things in different contexts. Reviewing has to shift its focus and emphasis accordingly as it moves from the sublime to the deliberately trivial.

Art writers and the editors who give them assignments usually manage to juggle the many competing interests, choosing shows that will be of interest to diverse and often mutually exclusive audiences, and producing reportage or reviewing that offers useful information on as many levels as possible.

But sometimes there are shows that are so important that they slip through the cracks between categories. And I am about to discuss one of them, just as this piece reaches the 500-word point at which, I am told, readers’ attention span is exhausted. Five hundred more words follow.

Threads of Time: Tradition and Change in Indigenous American Textiles, which closes at the Carlos Museum on December 17, is an exhibition that should have gotten a lengthy review — but one beginning with a short, snappy “You ought to go see this.” A survey of the history of textiles in a large segment of South and Central America (Peru, Bolivia, Panamá and Guatemala, to be exact), it has an innovative online catalog that cannot be downloaded except page by page, but presumably will remain available for as long as the Carlos Museum website exists. (At this point, the “how to use this virtual catalog” link gets you to a “coming soon” notice, so I must suppose this is a finished work of scholarship that is digitally a work in progress.) 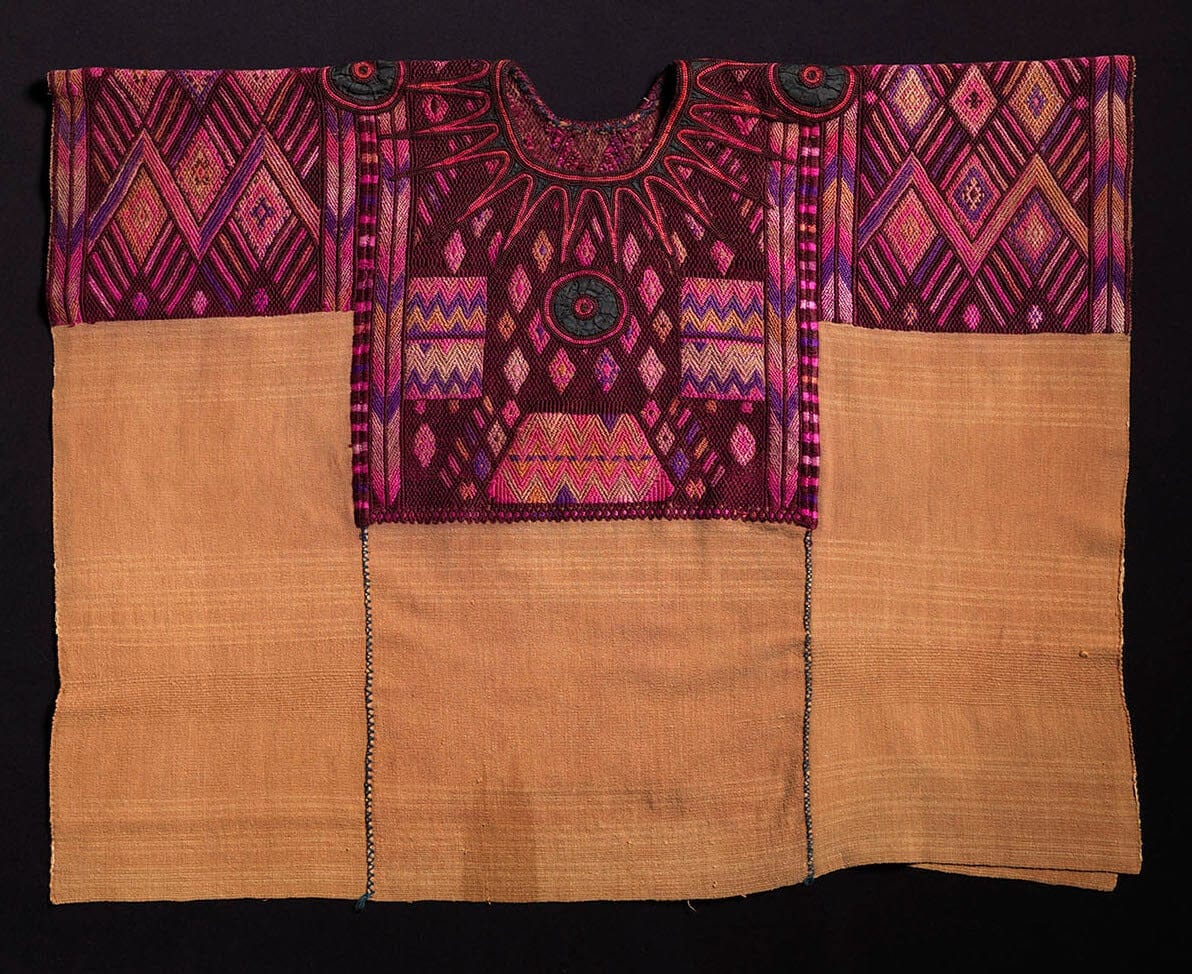 Since the show begins with three different types of ancient khipu — devices for writing by tying knots in cords — from the Inka empire and ends with garments made for saints’ statues and a decade-by-decade collection of contemporary traditional huipil blouses from Guatemala, a condensed discussion just of the time frame would require more attention than I have been able to devote to it, even without the problem of doing justice to the immense geography — as the show’s press release says, Threads of Time encompasses “indigenous textiles from the ancient and modern Andes, as well as from the Maya of modern Guatemala and the Guna of modern Panamá,” along with examples of looms and tools that show as well as explain how the textiles were and are made.

This omission due to time (and other) constraints is unfortunate because the show has ample pleasures for viewers even if they choose not to pay attention to the excellent scholarship presented so accessibly. It’s a visual and intellectual feast presented in digestible portions, but still more than most visitors can consume all at once. The format invites sampling followed by intensive study, but there are under two weeks remaining in the run of the show — holiday-season weeks, at that. 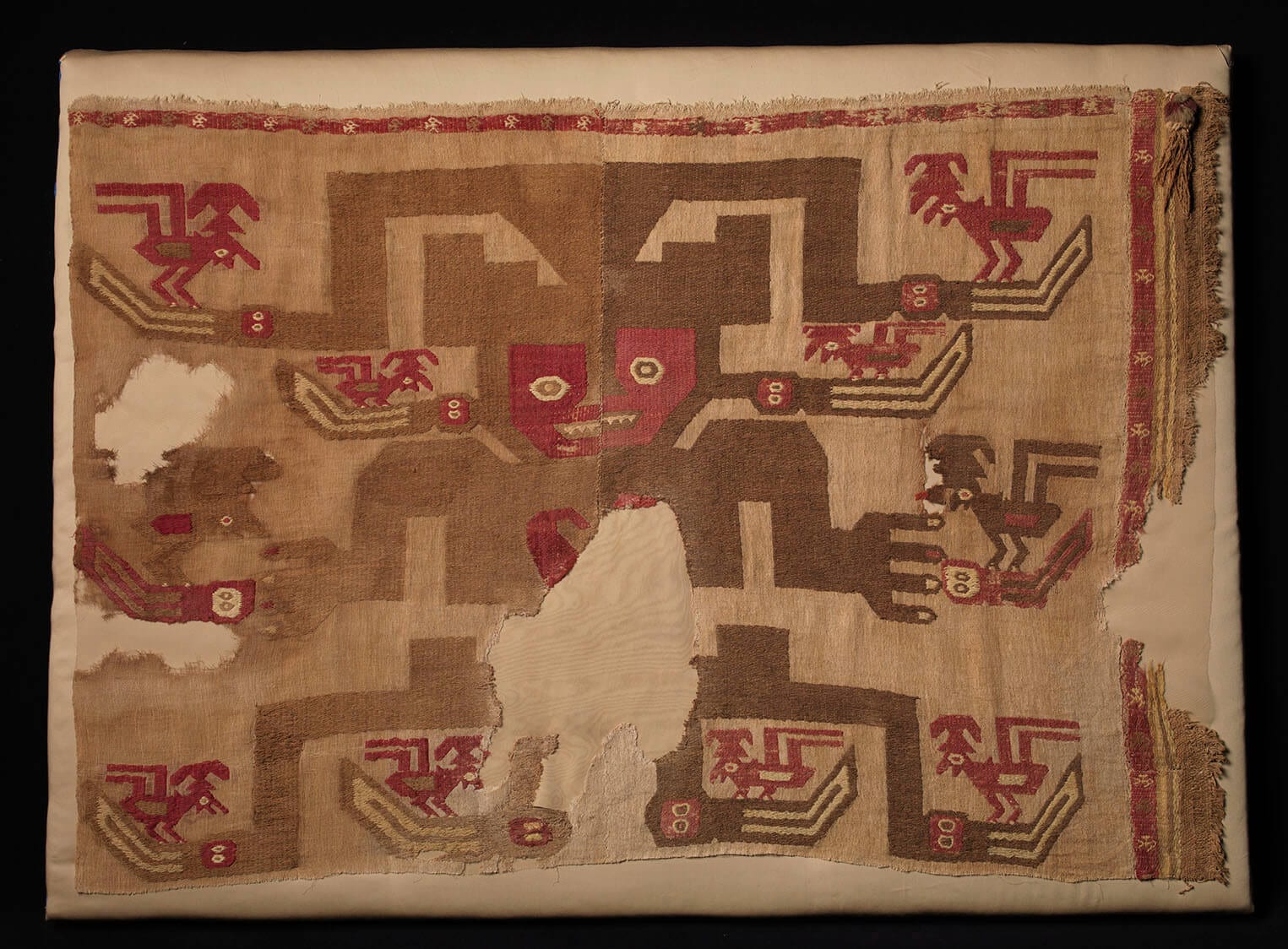 So there should have been a review much earlier, highlighting such remarkable moments as the realization that some of the ancient and modern fabrics are not dyed but woven from naturally ochre-colored cotton fibers. Yet this would be the otherwise valid “neat stuff on view around town” approach to an exhibition that deserves more — it reveals so much about the indigenous cultures of four countries that a would-be reviewer would have to devote several weeks to picking out which threads of time to follow for a general readership. Anything less would be intellectually irresponsible, since it is the job of the reviewer to provide clarity and condensed accuracy for far-ranging and multilayered topics like this one.

But in the meantime, there are solo exhibitions on which the artist has labored for two years or more, and group shows introducing work by artists who have never before come to public attention. The injustices of necessary omission accumulate, and I suspect the more difficult reviewing jobs are postponed even more often than I believe.

Fortunately, there are formats such as the radio interview in which the art historian and Threads of Time curator Rebecca Stone and Carlos Museum chief conservator Renee Stein have spoken for themselves without even the time-consuming necessity of transcription, so word has gotten out to potential visitors. But I wish Threads of Time — and more than one other museum show in Atlanta this autumn — had received analytical discussion. We — an all-inclusive “we,” not this specific venue — have an intrinsic structural problem, and until several things change simultaneously, it may be insoluble.