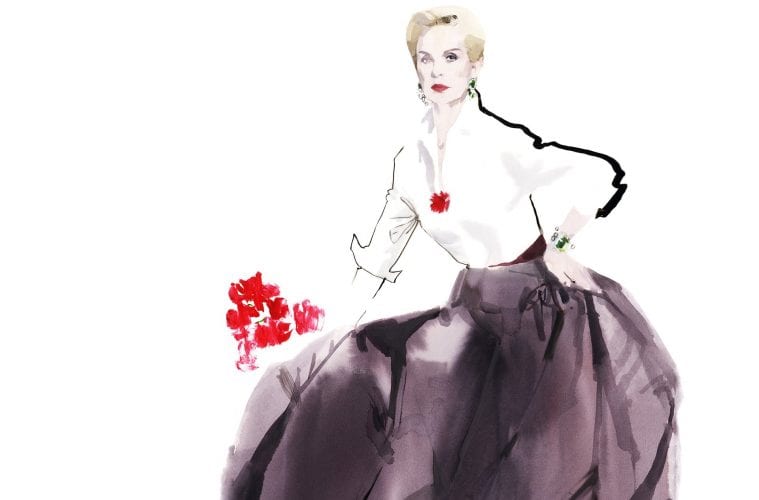 When Lady Gaga was being honored by the Trevor Project, an organization that strives to prevent teen suicides in the LGBT community, with their Trevor Hero Award, she had to wear something special. She called designer Carolina Herrera to create a one-of-a-kind statement dress, and the result was a black leather strapless gown with a jeweled serpent detail that wrapped from the right shoulder around the back of the dress. The original gown that was shown on the runway was made of a light, flowy silver material with the rhinestone snake on one shoulder, and when Herrera reworked the design, she applied her expert craftsmanship to make leather move like chiffon. This is the essence of House of Herrera — creating elegant designs with a variety of fabrics, ranging from leather to velvet to jersey knit.

This dedication to grace and glamour inspired SCAD FASH curator Rafael Gomes to put together the first museum exhibition of the designer’s work. Refined Irreverence features 99 garments on display at SCAD FASH Atlanta through September 25; and this dual exhibit is also on view at the Savannah College of Art & Design Museum of Art in Savannah through September 4, where 35 different runway looks, bridal gowns and red-carpet dresses are being shown. 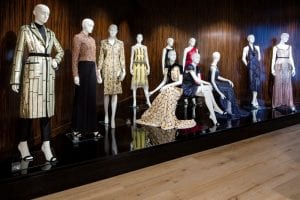 Throughout the 1960s and ’70s the Venezuelan-born designer was making a name for herself as a fashionista and socialite, even making the International Best Dressed list. In the early 1980s, after moving to New York City, Herrera’s friend, and then editor-in-chief at Vogue, Diana Vreeland, encouraged her to create her own line of clothing.  The showing of her first collection at the Metropolitan Club in New York in 1981 was met with, “thunderous applause — as thunderous, almost, as the ruffles Mrs. Herrera showed . . . ” (John Duka of The New York Times). The staples of that collection were two Grecian-inspired shimmering velvet gowns.

Thirty-five years later, Herrera has sustained a career in the male-dominated world of high fashion and often uses details of menswear in her designs. A silk taffeta black evening gown from Night Collection flashed pockets and was inspired by a double-breasted tuxedo jacket.

At 77, she shows no sign of slowing down — the exhibit includes work from her spring and fall 2016 collections as well as the timelessly elegant powder blue ball gown that Lucy Liu wore to the 2013 Golden Globes. Her designs are regarded as the embodiment of femininity, and the light blue floral ball gown is a quintessential example. Digital prints of red and yellow roses on vines of green leaves look as if they have been hand-painted onto the dress, making the garment look like a wearable painting. 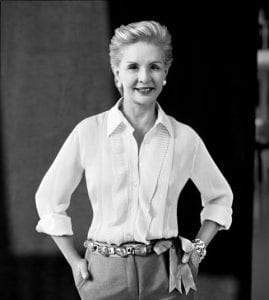 Herrera’s own signature white button-down blouses and black skirts have made her a representative of sophisticated whimsy within modern fashion. Within the exhibit, 10 of her signature blouses are on display. The most eccentric of them features feather and sequins hanging off of the bottom of the blouse. Herrera excels at adding a unique touch, whether it is a sequin or a flower, and making everyday garments unique, but also wearable and eye-catching. One of the most striking garments on view is an exquisite platinum and black cocktail coat that is adorned with what has to be thousands of sequins. The black beads form a rectangular geometric pattern and the coat is displayed with a black turtleneck blouse and black, slim-leg ankle pants. When Herrera wore the coat to the 2003 Coach’s National Design Awards Gala at Cooper-Hewitt Design Museum in New York, she donned a black knee-length dress under it and a black velvet belt around her waist. When she walked the red carpet, she looked as if she were wearing the New York skyline, but she maintained the simplicity of a little black dress and coat.

Herrera has left no material unstitched throughout her long career, drawing inspiration for her patterns from everything from flowers to film. The rooster feathers peeking from beneath a burgundy, one-shoulder cocktail dress from her 2003 Alfred Hitchcock Collection are inspired by the 1963 film The Birds. Even for those who will never wear a Herrera gown, the exhibit offers awards show fans and fashion magazine junkies an opportunity to ogle over the breadth of her career in person.