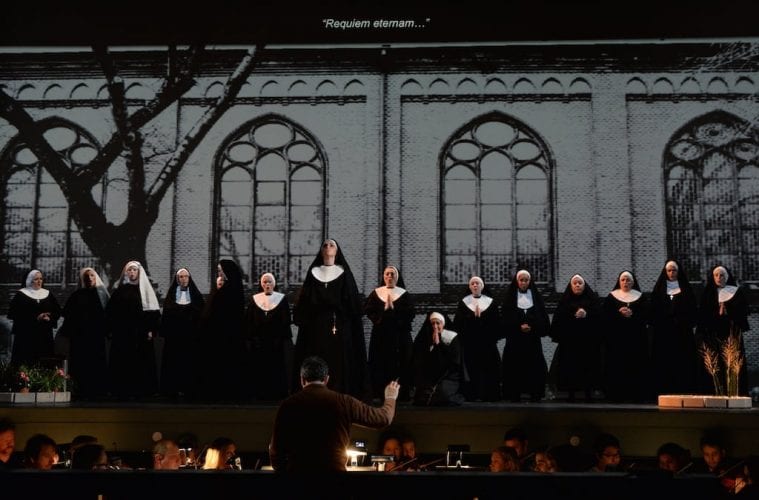 The big news at the Savannah Music Festival this year is that opera has been added to the mix. SMF already has what is surely the broadest palette of any comparable festival in the world, ranging from country to folk to jazz to chamber, with the Atlanta Symphony Orchestra even being bused over for a single concert.

Still, opera is different. There’s the cost. As George Bernard Shaw said, “Opera is the most expensive invention of man, second only to war.”

America’s major opera companies spend in the range of $1 million for every night they open the doors (the Metropolitan Opera spends much more), with ticket sales covering only a fraction of that amount. But opera is also just more complex than other art forms: there’s a full orchestra in the pit; then there are the production, staging and acting demands of theater; and most important, there’s the singing. It’s the ultimate collaboration.

On the other hand, opera fans are more committed, affluent and willing to travel, often great distances, to attend performances. SMF’s archrival, Charleston’s Spoleto Festival USA, was founded by an opera composer (Gian Carlo Menotti) and has always had opera as its centerpiece, typically staging three different operas each season and focusing on new or rare works or edgy productions likely to attract the cognoscenti. On some nights there, it seems half the audience has flown in from New York.

Rob Gibson, who has run SMF since its creation in 2002, when it took over a much more modest local festival, has taken note. “I had always hoped to produce opera,” he said, “but the expense and my not having produced it before were factors.”

Then came the Savannah Voice Festival, a training program for young singers started by the legendary baritone Sherrill Milnes and his wife, Maria Zouves, its director. Gibson saw an opportunity and “our conversations led to a collaboration.” Gianni Schicchi showed the promise of opera at the festival. (Photo by Elizabeth Leitzell)

The idea seems to have been to give the voice festival students some exposure while producing professional-grade opera. The result was a Puccini double-bill, which opened last Friday. The composer’s Il Trittico consists of three one-act operas designed to be presented in one evening, but occasionally they are presented separately or with one opera dropped. Here, either to save money or out of concern for the attention span of festival-goers, “Il Tabarro” was deleted.

Up first was “Suor Angelica.” A tragedy set in a convent, it’s often performed by student groups because it offers so many easily singable roles for female voices, which predominate in voice programs. It does have a few meaty roles, however, and here the casting got interesting.

Chilean soprano Verónica Villarroel had a significant international career starting around 1990. She seems to have receded from view in the last decade or so, but the reputation lingers. So it seemed a bit of a coup to land her for the title role, presumably the result of Milnes’ influence.

The sound is still huge, especially in contrast to that from the students. But the voice now seems beyond her control, intonation is erratic, and the top is brittle. The lovely colors are gone. It’s always painful to hear a great singer trying to recapture lost glories, and it seemed even more poignant in this sad, youthful role. [Informed of the death of her illegitimate son, Angelica poisons herself; or at least that’s the way it was written.] Operas such as Gianni Schicchi are to be a fixture of future festivals. (Photo by Elizabeth Leitzell)

Of the professional singers, mezzo-soprano Susan Nicely stole the show as the cruel Principessa (Angelica’s aunt). Much of the role is parlando, but she revealed a gleaming top voice when called for, together with a truckload of charisma.

The younger singers were all competent. One major asset here is the glorious acoustics of Lucas Theatre, one of the most voice-friendly rooms in Georgia.

Conductor Eugene Kohn famously spent his youth accompanying both Renata Tebaldi and Maria Callas (the character Manny in Terrence McNally’s Master Class was based on him), and here he seemed to be doing the same thing: coddling the singers with gentle tempi and dynamics rather than giving us the kind of atmospheric reading “Suor Angelica” demands.

Savannah once had a salaried, professional orchestra, the only one in Georgia besides the ASO, with a budget in excess of $2.5 million in the 1990s. Sadly, it went broke in 2003, weeks before the SMF’s first season, at which it was to perform. In 2008, the Savannah Philharmonic Orchestra was organized as a “per session” orchestra.

Meanwhile, SMF has gotten by without an orchestra, except for the ASO’s one-night stand (scheduled for March 28). This season, SMF has begun using the Savannah Philharmonic Orchestra as a sort of house band, and the opera performance was its festival debut.

Unfortunately, on this night they didn’t seem quite up to the job. There were problems with intonation all around, brass errors and general murkiness. The Spoleto Festival USA Orchestra, which imports players from all over the country, is simply in an altogether different league.

“Suor Angelica” doesn’t ask for an elaborate production, and director Joachim Schamberger, who also designed the sets and clearly worked with a tight budget, limited things to static projections on scrims, mostly stone walls suggesting a convent, with a few simple props in the foreground.

The ending calls for Angelica’s suicide, which becomes a sort of transfiguration as her prayers are answered by the Virgin Mary. Schamberger decided on a “more hopeful” finale, in which Angelica seems to have a vision, but changes her mind about suicide after her encounter with the dead son, all done with busy projections.

No great harm was done, but the reinterpretation might have made more sense elsewhere, for an audience more likely to be familiar with the original ending and ready to take on alternatives.

The sprightly comedy Gianni Schicchi came off much better. The fine baritone Mark Delavan dominated the stage with his powerful voice and scenery-chewing charisma. In the opera, a greedy family, disinherited by their wealthy cousin, schemes with Schicchi’s help, to replace his will.

Much of the cast carried over from “Suor Angelica.” Of these, Susan Nicely was especially delightful as Zita, one of the oldest and most colorful of the cousins.

There is a subplot with a pair of young lovers, and a young young Argentine tenor, Santiago Ballerini, showed considerable promise here. Good tenor voices are quite rare and seem to take forever to develop, but there was enough classic Italian tenor sound going on here to suggest that something was up. Keep an eye on that kid. Ballerini was paired with Oeste and she was delightful in ”O mio babbino caro,” a declaration of her love sung to her father (Schicchi) and the opera’s big show-stopping aria.

The rest of the large cast came across well, with more vocal heft all around than the “Suor Angelica” cast could muster. This seemed to free Kohn and his orchestra to give us a bit more sound and atmosphere. The errors and pitch problems persisted, but weren’t nearly as noticeable as before.

For Gianni Schicchi, Schamberger updated things to the present day. When the curtain opened, the dying cousin was in a hospital bed hooked up to machines, and a digital pulse readout moved across a scrim in the foreground. Singers walked through the audience as they came and went.

This opera is almost foolproof and it all worked rather well, though the acting was sometimes awkwardly choreographed. One fight scene was so ineptly staged as to be amusing.

Still, things ended on a happy note, largely due to the splendid contributions of Delavan. In the precurtain talk, Milnes said this was “the first of many opera performances to come.” So, in essence, this was the birth of a new opera company, something quite rare and exciting these days.

Each day of opening weekend offered a different experience for classical fans. On Saturday, for the first performance of the Chamber Music Series, we got the gifted pianist Sebastian Knauer performing Mozart’s Ninth Piano Concerto and the elegant violinist Daniel Hope performing Mendelssohn’s Violin Concerto in D minor (not “The Mendelssohn” — this is another concerto the composer knocked off when he was all of 13).

In both cases, they were accompanied by the Savannah Philharmonic, which soon encountered some of the same problems as in the operas. It would be nice to say only nice things here, but this simply isn’t an orchestra that can play at the sort of international level that the SMF seems to aspire to. It’s also not at the level of major classical music festivals around the country and, for that matter, the level this festival has set for itself with its own chamber series in prior years.

On Sunday, Russian pianist Nikolai Lugansky performed a series of short selections from Schubert and Tchaikovsky. He is an exciting artist, especially in the Tchaikovsky, where he was able to display the breathtaking range of his interpretive ability and his formidable technique. We left wanting more.

The festival continues until April 4, and for most events it’s possible to simply show up and purchase a ticket. Classical performers this year include pianists Murray Perahia and Stephen Hough, the Emerson String Quartet, Brooklyn Rider and much more. Cellist Lynn Harrell will be performing as part of the Atlanta Symphony Orchestra concert. If you’re at all flexible, and especially if you like to venture into jazz and cabaret, this can be a place to immerse yourself for a few days, with breaks to enjoy the glories of Savannah at the peak of azalea season.

They must be doing something right. As Gibson told me, “During the past 12 years, we’ve grown from an $850,000 annual budget to nearly $4 million, from a 10-day event to a 17-day event with triple the number of performances.”

To have done so at a time when arts organizations are contracting all over the country is truly remarkable.