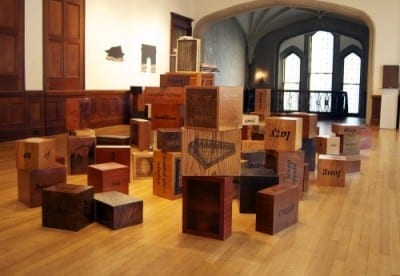 For most of us, there are buildings that speak to us on some profound, familiar level. They might be the historic homes we pass on our commute each day, or the iconic big daddies such as the Eiffel Tower or the Parthenon, whose historical magnitude and visual charms strike a note of reverence and respect. So it is in Atlanta with the Callanwolde Arts Center, the residence in the 1920s of a Coca-Cola mogul. Until August 26, Callanwolde is the site of Ruth Stanford’s “A Sculptural Love Poem to Architecture,” an homage to the feelings of awe, tenderness, adoration and inarticulate fondness we feel for buildings.

Awakening viewers to the power in the quotidian, the show makes the worthwhile point that beauty is all around us. Technically accomplished, with a clever idea at its heart, “A Sculptural Love Poem” flounders when it invites the public to add its ideas to the mix. “Interactivity” is a buzz word for our age, but it can leave much beyond the control or intention of the artist. Sometimes it’s best to take the reins rather than risk upsetting the cart with too many drivers.

One of the exhibition’s two parts consists of silhouettes of familiar landmarks culled from clip-art books. Gallery-goers are encouraged to choose from an array of magnetic words, both nondescript and architecturally related, which they can affix to the metal silhouettes.

Sometimes the choices are inspired, such as “people want safe life,” a plea for environmental responsibility that snakes up the smokestack of a factory silhouette. On the Gothic cathedral silhouette, single words speak to the ecumenical vibe: “restoration,” “chant,” “kneeler,” “cherub.” More often, though, the public’s contributions have a “Mad Libs” illogic (“I want a puppy heart”) or, in some cases, the snarky feeling of dashed-off restroom graffiti (“celebrate weed”). Perhaps not everyone relates to the adoration for architecture that animates this show. The show’s other element is stacks of large wooden blocks like children’s toys blown up to step-stool size. They are crafted from a variety of woods — birch, oak, sapele — finished with various stains imprinted with architectural details from the Callanwolde building. The blocks are also inscribed with words, contributed by Terri McIntosh and Jennifer Wheelock, that respond to Callanwolde’s uniquely warm and elegant architecture. Other, more architecturally precise terminology attests to the house’s subscription to design principles such as “rough coursed limestone” and “double return staircase.”

The blocks are satisfyingly hefty: dense Hershey’s Kiss nuggets of wood and romance boiled down to their essence. With less intervention from outside participants, Stanford’s eye for craftsmanship and pared-down forms shows enormous potential.