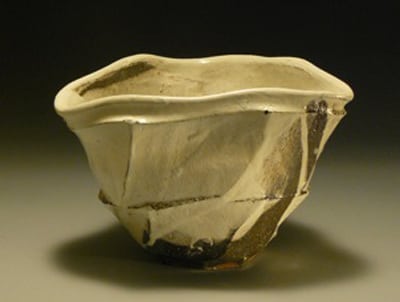 Life is fragile, a fact so frightening that we repress it as we go about our daily routines. Still, it simmers in our consciousness, closer to the surface in places where the risk is greatest, places, as the recent tsunami reminded the rest of us, like Japan.

Perhaps this vulnerability accounts for the sway of wabi sabi, a term that describes, as I understand it, an aesthetic and a way of living consonant with Zen Buddhism. A complex constellation of values (simplicity and modesty among them), it betokens a fundamental acceptance of our fate: in the words of author Richard Powell, “Nothing lasts, nothing is finished, nothing is perfect.” 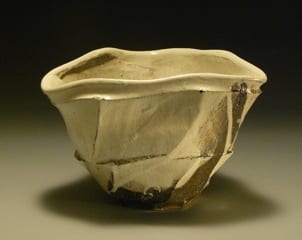 This ethos is movingly embodied in the clay vessels of Shozo Michikawa on view at the Signature Shop & Gallery. Though an experienced production potter, Michikawa eschews traditional refinements and methods. His pots are irregular in shape, asymmetrical, roughly textured, deceptively primitive. Unlike most ceramists, who center the clay on the wheel and build up the walls of the vessel with two hands — one on the interior, one on the exterior — Michikawa effects his sculptural forms by working the decentered clay from the inside out, often poking the interior with a stick to get the shape he wants. He creates torqued, spiraling forms — and a sense of dynamism — by spinning the wheel in different directions. 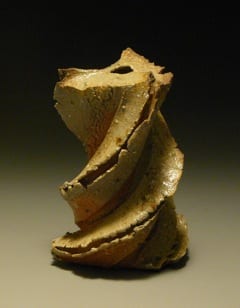 The artist cuts away at the exterior with a wire to shape the rodlike protrusions, wedges, flaps and origami folds that give his work an earthy tactility. This characteristic reflects ceramist Judith Duff’s observation that because the Japanese hold their rice and soup bowls when they eat, they have a more intimate relationship with pottery. These objects are made to be touched.

Though based on traditional forms such as the teacup or rice bowl, Michikawa’s vessels often more closely resemble elements in nature: striated cliffs, plants or geological occurrences such as extrusions of lava. This last reference is autobiographical. Michikawa grew up at the foot of Mount Usu, an active volcano in northern Japan. Perhaps the pent-up energy that his pots barely contain parallels the workings of the volcano. A childhood spent in its shadow might explain his attentiveness to nature and the concomitant humility that pervades his practice. He even surrenders the final stage of the creation to nature: wood-firing the pots, a days-long ritual, in which the outcome cannot be totally controlled or predicted.

Michikawa’s exhibition (with Judith Duff) will close June 25, but a selection of their works will remain at the shop.