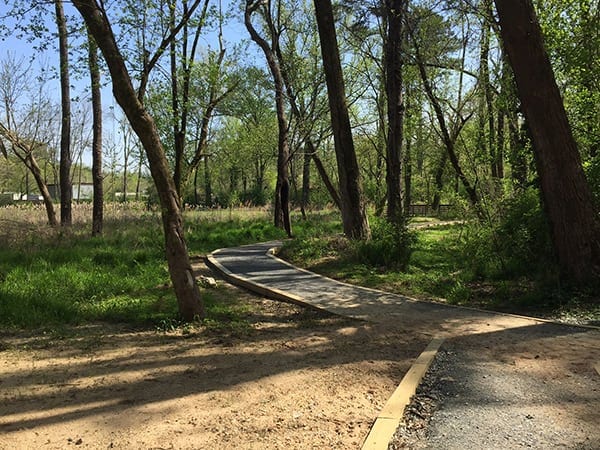 Review Round-Up: “Hop, Skip, Jump” at Poem 88, “Floral” at Hodgepodge, “Here and Now Here” at Whitespec and Sasha Fletcher’s “It Is Going To Be a Good Year”

“Journeys,” the first part of Hormuz Minina’s “Hop Skip Jump,” condensed the immigrant experience into a single installation that placed the visitor in a closer participant relationship with Zoroastrian culture than his thoroughly American daughter experienced at the New Year’s ritual. Washing in rosewater before choosing a flower, the visitor experienced empathy with the culture that had led to the flight of Minina’s ancestors from Persia. Following a red thread to the river to cast their flower into it in homage to all migrants was a further entry into empathy.

“Borders” was a more typical Minina endurance performance in which a hired security guard  stood motionless on one side of a blue-tape borderline down the center of the gallery (including the empty table that had held flowers and fruit the previous week). Minina stood on the other side of the boundary, facing away from the guard and gallery visitors and towards a video of an ocean washing against a beach.

Placed thus in the position of occupants of one side of a border that Minina was fated never to cross as he looked back towards the sea, visitors chose to view passively. No one violated the sanctity of the border. –Jerry Cullum 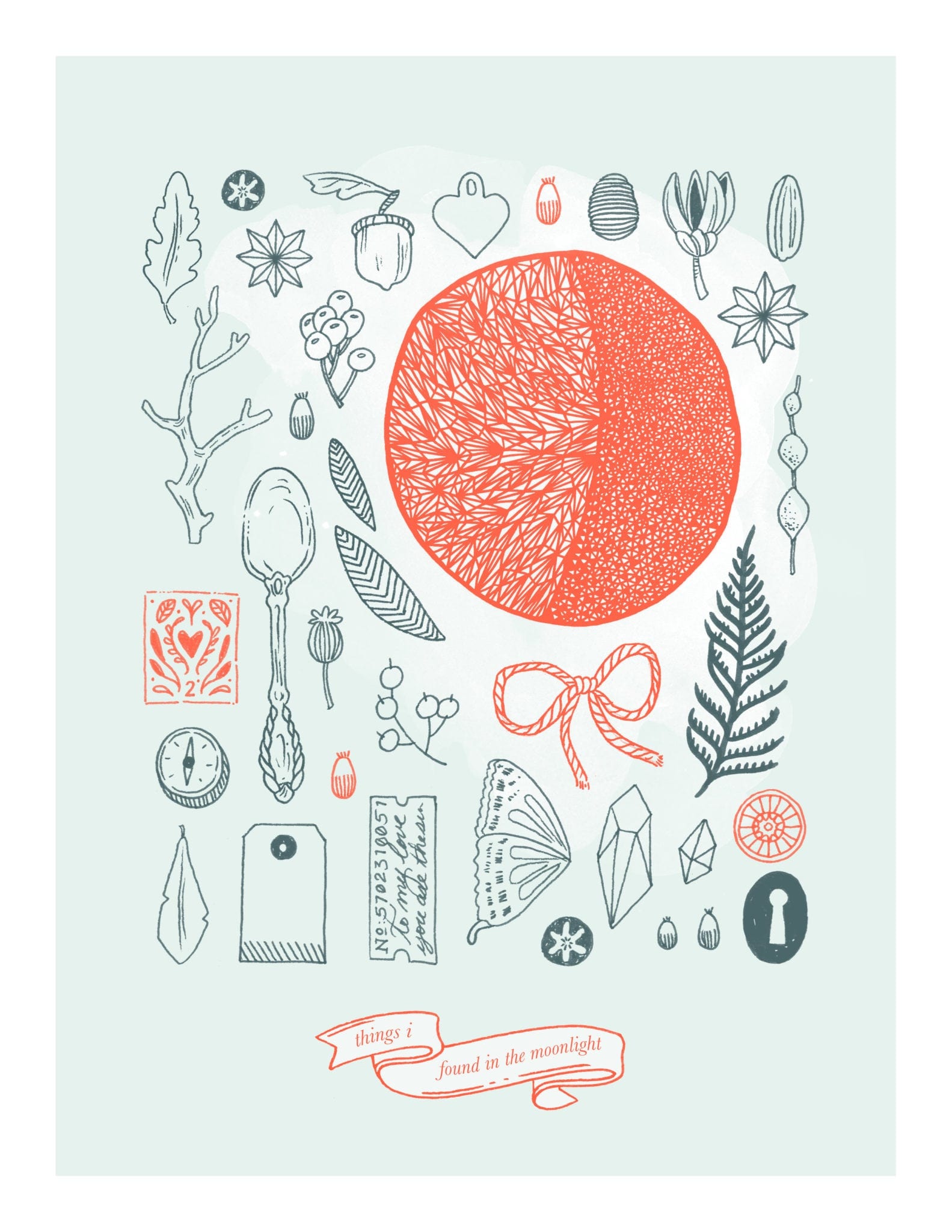 “Things I Found in the Moonlight” collaborative work by McManness and Freeman. Image courtesy the artists.

FLORAL is a show of collaborative and individual work by Molly Rose Freeman and Erin McManness of Paper Raven Co. at Hodgepodge Coffeehouse and Gallery. Together, their differences coalesce in a balanced mix of precise illustration and more intuitive compositions built on abstract themes of propagation and interconnectedness. Freeman brings a lively moxie that complements McManness’s technical prowess. “Summer,” a collaborative work resembles blossoms, dividing cells and psychedelic bouquets, all at the same time.There is an analogous tension in the grid of natural and man-made ephemera around a densely filled in moon in “Things I found in the Moonlight,” another collaborative piece.

Separately, their individual work isn’t as strong, leaning on the decorative qualities of flowers as objects that beautify the environment. Freeman’s signature geometric forms become kaleidoscopic, cellular webs in works like “Moss Rose” and “What I Felt Like.” Despite the tight precision typically associated with geometry, Freeman maintains a painterly imperfection in her freeform line drawings. This stands in contrast to McManness’ flatter graphic work. Belying her illustration background, McManness’ contributions incorporate tiling patterning and inspirational quotations like, “A flower does not think of competing to the flower next to it. It just blooms.”

Some of the references here feel more like aesthetic choices rather than conceptual ones. For example, McManness’ “Otomi”is a beautiful flat pattern and well executed technically but Otomi isn’t an idea or a concept, it’s an indigenous ethnic group in Mexico known for their embroidery style. Overall, “Floral” aspires to attract viewers with its light aesthetic but fails to plant the right amount of depth.–Angela Bortone 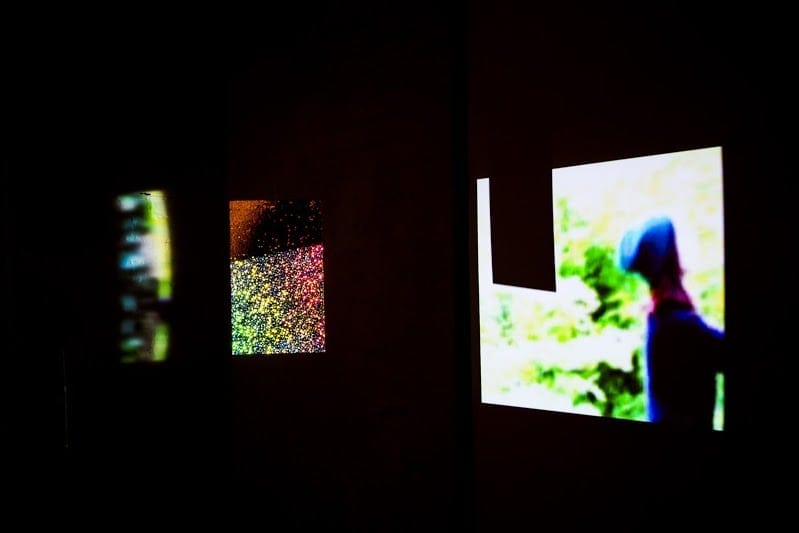 “We Be Ready” from Kay Lee Patton’s “Here and Now Here.” Image courtesy the artist.

Here and Now Here is a MFA exhibition and first solo show by Kaye Lee Patton. Presented at Whitespec, the SCAD-Atlanta student showed a collection of painting, installation and projection works influenced by retrospection and virtual reality. Essentially Patton attempts to preserve memories of experiencing place through screens, the work is composed from Facetime stills and video as a way to engage “a location halfway around the globe” (which can be interpreted as Patton’s native South Korea).

The video installation, “Snip Snap Slip – Remix,” is perhaps what I love most about the show. In it, a small pedestal holds a tiny projector, in front of which two pieces of plexiglass hang from the ceiling. Each piece of plexi is covered with holographic paper. The plexi gently rotates and bounces the video image, causing the projection to spin around the room. In turn, the viewer is left to reflect on the totality of our external environment versus the narrowness of our perception and the current limitations of our video recording capabilities (360˚ video exists, but it’s not quite perfected).

The video’s image, mostly abstract and heavily processed, echoes the low resolution of the photo transfer paintings as well as the drippy, popcorn ceiling-textured paintings. Though the paintings are overshadowed, the show is worth seeing, if only to experience this remarkable video installation that temporarily activates the gallery space into an alternate place. –Angela Bortone 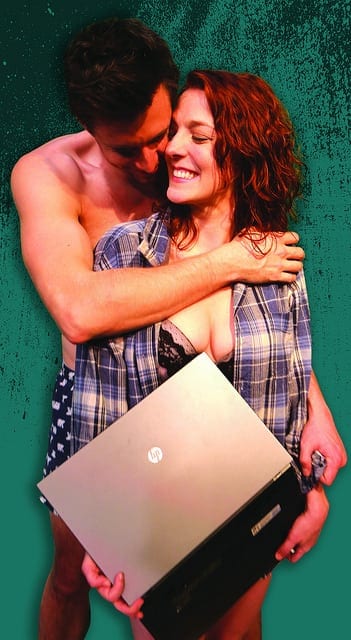 Sex With Strangers by Laura Eason at Horizon Theatre is a smart wrangle through failure, success and sizzling ambition. Olivia (Megan Hayes) is a “poor and obscure” literary writer. Ethan (Michael Shenefelt) is a “popular and rich” blogger turned author. They meet, collide, and the play plunges into its real concern: connection and commitment in an age when you can have sex with strangers within minutes (“We did what we did last night, but you won’t let me read your book?”). Shenefelt and Hayes are lovely together. Shenefelt’s Ethan oozes charisma as he effortlessly delivers sleazy lines with roguish charm and boyish insouciance. Hayes’ performance is equally vibrant. She plays Eason’s refreshingly sexy older woman with aplomb and touching vulnerability as Olivia seeks Ethan’s true nature: Nice guy or womanizing blogger? The Horizon Theatre’s snug dimensions lends an intimacy to the frequent sexy scenes where Sex With Strangers becomes an inquiry into voyeurism. Under Jeff Adler’s smooth direction; the actors’ prowl across tight spaces that compliment their verbal sparring. The soundtrack, comprising largely of email pings and cell phone ringers, is a fitting accompaniment to the effects of technology on art and relationships. The end is a complete surprise and whether you cheer or shake your fist will depend on whether you like your tales left open or closed. Sex With Strangers is a “must watch” for anyone who has ever just wanted some respect. —Soniah Kamal 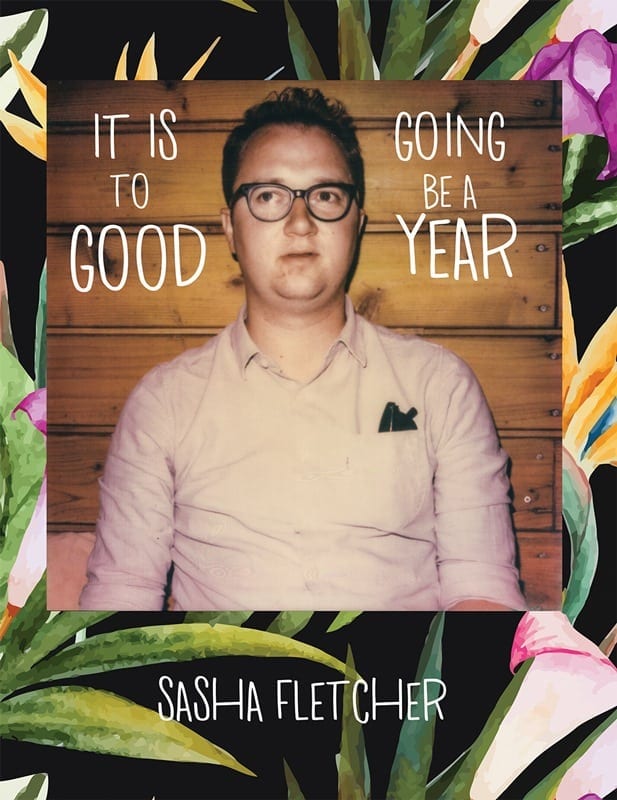 It Is Going To Be A Good Year by Sasha Fletcher

In his first book of poetry, It Is Going To Be A Good Year (Big Lucks Books, 100p), Sasha Fletcher  explores the cataclysm and rapture of love through the shared experience of a couple.  In their world love takes the form of bank robberies, 500 children, a room full of ghosts, even a detailed recollection of some French movie.

Since his debut novella, When All Our Days Are Numbered Marching Bands Will Fill the Streets & We Will Not Hear Them Because We Will Be Upstairs in the Clouds (Mud Luscious Press, 2010, 98p), Fletcher has honed his natural talent for balancing humor with highly impactful prose, such as this moment in “Date Night”:

This is really something wonderful you said / and I agreed. I told you / That I loved you very much / and everyone at the restaurant agreed and after that / we went home and got into bed / and talked about the future / in that I said In the future after the world ends / we’ll all be ghosts / and the ghosts in the living room said Like us? / And I said Shut up ghosts I’m telling a story

Fletcher uses comedy to disarm his reader. This is a manipulative tactic, one that allows Fletcher to take us to tender, isolated emotional spaces before doubling back. He builds a rhythm like this –most poems pivot between tragedy and joy.

The story of the couple parallels the experience of the reader. In the isolated milieu Fletcher has constructed for the lovers, he takes the reader through extremes of feeling. Their escapades pose some questions about the experience of love. What exactly is the difference between unquenchable enamoring and paralyzing fear? What role does cynicism play in compromising our own need for affection? How does love manage to persuade us to test our own capacities? It Is Going To Be A Good Year is not concerned with answering these questions. Its focus is on the ambiguity of a life lived within them. –Laura Relyea