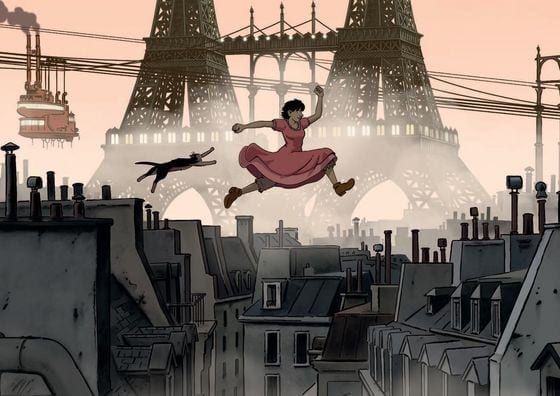 It’s steampunk time all over again, as a film version of French graphic novelist Jacques Tardi’s April and the Extraordinary World comes to the screen.

If you’re not familiar with the texture of the alternate-reality idea behind steampunk, think The League of Extraordinary Gentlemen (the Alan Moore graphic novels, not the lousy screen version) or Jean-Pierre Jeunet’s movie The City of Lost Children. Extraordinary World also has shout-outs to Howl’s Moving Castle, the Tintin comics and any number of Jules Verne adventures.

In the exposition-heavy opening, we learn that World War I never happened. Neither did the inventions of electricity, airplanes, gasoline or internal combustion engines. Instead, the smoke-choked Paris we encounter in 1931 is full of dirigibles and steam-motored jalopies powered by charcoal. Mankind has already depleted the planet’s coal reserves. Now, wars are waged over valuable woodlands, coveted as fuel.

How did this happen? Well, in the late 19th century, the globe’s top scientists began mysteriously disappearing — Einstein, Marconi, Pasteur, as well as Paul and Annette Franklin. Unfamiliar with the Franklins? Well, Paul is the son of Prosper (aka Pops, voiced by French legend Jean Rochefort), Annette is Paul’s wife, and all three have spent their lives trying to devise a serum that confers immortality.

A side effect from previous experiments has given a few lab animals the ability to speak. That explains their talkative housecat, Darwin (voice of Philippe Katerine), beloved pet and best friend of the Franklins’ young daughter, April. And only April and Darwin escape an assault by Emperor Napoleon IV’s police force, determined to harness any remaining scientists in support of imperial progress.

Cut to 1941, and April is a young woman, living in secret in a laboratory located inside the head of an enormous Napoleon IV statue, erected on the site where Sacré-Cœur would stand in our own world. She’s still being pursued by an Oliver Hardy-ish, Thompson and Thompson-like inspector called Pizoni, who enlists a young street scruff named Julius to discover her hiding place — even if it means tugging at her heart.

What follows is a series of chases, escapes via a submersible Victorian mansion underneath the Seine (the Howl’s Moving Castle moment), and an unexpected family reunion at an underground lair ruled by sentient komodo dragons with plans for devising either mankind’s salvation or its destruction.

Sounds fun, right? Well, there’s pleasure to be had here. The movie is made in part by a director of 2007’s Persepolis, also based on a graphic novel. But sometimes there’s a heaviness to April — partly due to a color scheme of industrial grays, rusty crimsons and moss greens — that keeps things feeling earthbound, even when our heroes are soaring over the sea in an insect-like “airocopter.”

Also, April is not the sprightly heroine her name might suggest. As drawn, she looks a bit like a thick, humorless barmaid in her 30s; voiced by Marion Cotillard, she has none of that Oscar-winning actress’s charm. But give the movie this: It includes a lovely epilogue that is a happy reversal of the sob-inducing prologue of Disney’s Up.