When I arrived at Cooper Sanchez’s Clarkston home, Sanchez was standing at the window of the sunroom that makes up the front façade of his home. I thought he was at the window to greet me, but soon realized his gaze was not at my car but at a Monarch butterfly that flapped against his large window. Sanchez cupped the insect in his hands. I parked my car and grabbed my notebook. The March sun and brisk air greeted me; it was remarkably quiet, and the bright green scent that blossoms as Atlanta turns from winter into spring enveloped me.

Sanchez opened the front door with a wide smile and welcomed me to his home. “Let me show you some things.” I followed him across the gravel driveway, around to the backyard. The space opened to a picturesque scene.Behind a deep emerald fir tree was a meadow– stalks of various plants blanketed a small rolling hill. Cooper named each plant as he pointed to them, then kept walking to an old sky blue VW Beetle in the middle of a flower bed. He stopped to tell the story of how the car got to his garden before walking  further along the path. I skipped to catch up; my eyes darting around to absorb all the shapes, smells and spacing of the plants. The knowledge and zeal Sanchez brought to his garden was contagious. We walked to the front lawn where a hundred daffodil stalks in neat rows poked through a layer of fallen leaves. “I moved these from a forest in town,” Cooper says.“I’d been wanting to move them from the woods for years. They won’t bloom until next year. Come this way, I have one piece installed.” 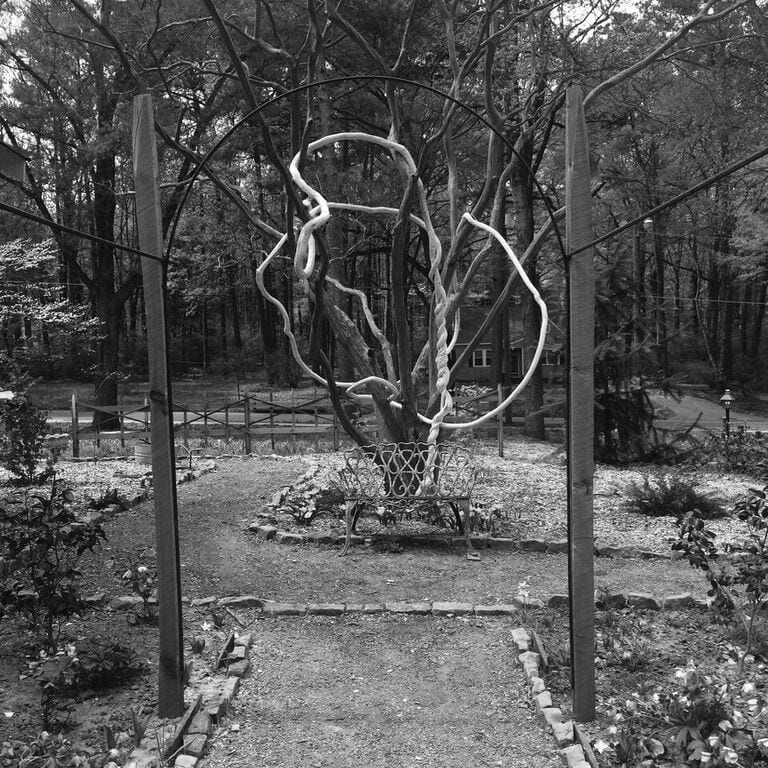 Around the corner stood a tree  draped with a white winding, rope-like vine, woven between the limbs before descending to the ground in a delicate falling arch. The vine looked like an extension of the tree’s root system, a lifeline.  Sanchez had been harvesting Wisteria for months. He looked up at his sculpture  as cold breeze swayed trees and shook leaves around us. The vine remained solid, unmoving, as if made of casted metal. Sanchez spoke of the invasiveness of Wisteria, its tendency to suffocate trees. He moved to a newly-installed trellis towards the back yard. Spread out like drying coffee beans, mounds of Wisteria vines weighed down canvases and plastic sheets, drying with a fresh white wash. Each vine destined to become a sculpture soon to hang and balance in the hundred year old trees of Oakland Cemetery for the nocturnal garden tour, Illumine, on April 16th.  Along with his Wisteria installation, Sanchez created dozens of light boxes to serve as guideposts along the walking tour  of the cemetery.

After a while walking around the mounds of white painted vines, Sanchez showed me the light boxes, made from bee boxes, historic photographs and pressed foliage he collected from Oakland and beeswax. Sanchez removed one box from a stack and placed it over a bare light bulb. The front-facing panel illuminated a black and white scene of an ornate headstone from Oakland with glowing orbs created from the artist altering the ortho-film. Sanchez shifted through the stacks of finished boxes and held up another piece, in which a pressed fern leaf took up the entire frame. The fronds were slightly coiled, but the ornate leaf glowing through a layer of beeswax was transfixing.  Sanchez told me about the other artists he asked to create pieces for the one-night event: painter Charles Ladson, filmmaker Steve Bransford and Elizabeth Ingram, whose small tintype photographs Sanchez revealed carefully from tissue paper, the sheen of the metal shined in the light. 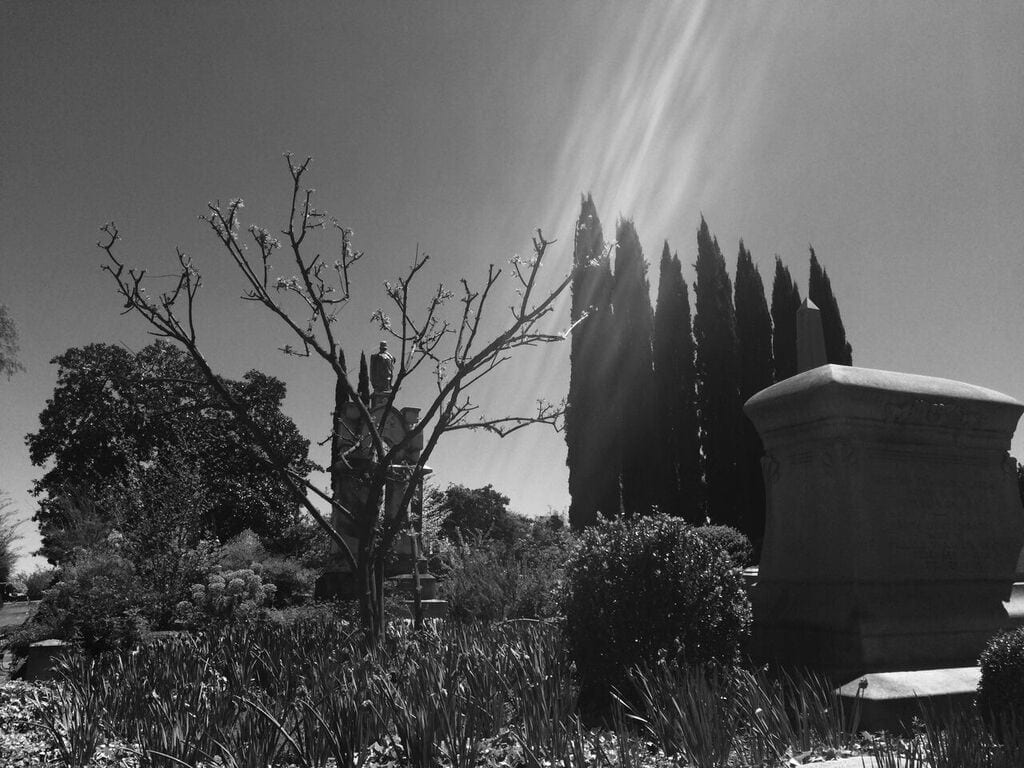 A few weeks later, I visited Oakland Cemetery during daylight.Earlier, I received a message from Sanchez saying  a piece was installed close to the watchtower in a magnolia,his favorite so far. I walked through  Oakland to find it and remembered the power of the place.Oakland was built as refuge, a place of enjoyment and a place for the spirit to be contemplated and celebrated. A vintage book Sanchez showed me weeks earlier titled Genius Loci came to mind. ‘Genius Loci’ is a Roman phrase that means “spirit of place” and  was often denoted to mark gardens as places of thought and spiritual insight.

I meandered through the organized rows of ornate headstones, mausoleums and canopies of trees. Out of the corner of my eye a white winding structure crept from the ground into the arms of a magnolia. The sun was bright and sunspots glittered in the alcove of shadow created by the giant tree. The beauty of the sculpture made me catch my breath. The tension between the organic and inorganic, invasiveness and passiveness and, most notably, the inherent beauty of form found in nature. I walked closer to the piece, a ladder was erected and a post was installed, waiting to be adorned with one of Sanchez’s lightbox. I closed my eyes and could imagined the evening of Saturday April 16th and all the living spirits wandering, searching and becoming illuminated and enthralled with this place, becoming the spirits that are meant to reside within Oakland Cemetery, the living and the enlivened.  Illumine aims to do just that, to give us remarkable works of art that guide us on an illuminated journey through the spirit of place.