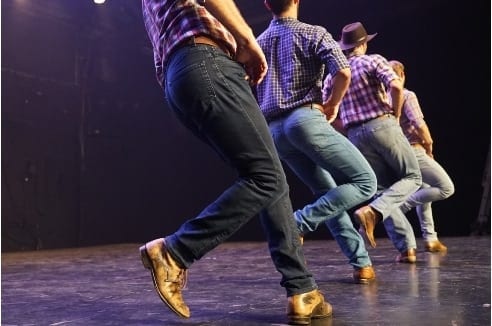 The Israeli duo of Sheinfeld and Laor dipped into American folklore with Cowboy.

Country line dancing and children’s games may seem lighthearted and innocent enough, but in the paired performance works Cowboy and American Playground — which take on each of those subjects respectively — the seemingly innocuous activities bubble with a sense of anxiety, menace and alienation.

The two works, both created by Israeli duo Niv Sheinfeld and Oren Laor, were presented November 3-6 in Atlanta on the same program at 7 Stages as part of the EXPOSED festival of contemporary Israeli dance. Cowboy is a 2015 work for four men, and American Playground is a new work created for six dancers in the Atlanta-based ensemble company CORE.

Typically, there are no narratives in Sheinfeld and Laor’s work in the usual sense, but new situations unfold with an inventive, but slightly nightmarish sense of illogic. There’s genuine humor throughout but its edges are seldom gentle; images are often shot through with themes of sadism, humiliation, conflict and the disturbingly surreal.

Both works are performed on a completely bare stage. Cowboy begins with a country line dance. The tropes are familiar and appealing, if a little cheesy: four men in boots, jeans and flannel shirts, with perfectly erect posture, thumbs in belt loops perform synchronous footwork set to a song hitting all the country music bases of loneliness, broken hearts, and so on with the slightly off-kilter aspect that the singer has a light European accent.

The comfortingly familiar and regimented situation begins to crumble further as the song ends and one performer develops an unmanly curve to his spine, his knees bow together and one arm rests languidly on his head, a pose more appropriate to a bathing Venus than a swaggering cowboy. The performer vogues about and then offers a welcome in an exaggeratedly feminine voice, listing all the things the performance will not be about: top among them are emotion, masculinity and femininity, which are obviously being addressed. Pina Bausch, who is a clear influence, also merits a mention as being not on the program.

From there, we get various bizarrely deconstructed takes on the cowboy: dancers don ballet slippers, stage-fight, lip-sync to a cheesy ABBA song in a 10-gallon hat.

The show gets more dreamlike (or more nightmarish, depending on your perspective) as the performers drift further and further from the opening number’s synchronous formality and the conventions of American masculinity. Leather boots are doffed as a pair of sparkling silver, high-heeled thigh boots are donned. Flannel shirts are removed, and in tri-color satin boxers, one of the dancers speaks about the problems and anxieties of being a non-Jewish temporary citizen married to a Jew in contemporary Israel, about as far from country line dancing as it’s possible to get.

In the work’s best bit, jeans are lowered and worn inside out around the ankles, stretched between spread legs as two performers assume playful, athletic but strangely anti-erotic embraces. It’s a stage image I found head-spinningly hilarious and inventive, but as with a dream — and many of the show’s surreal situations — it’s almost impossible to explain the feeling to a third party afterwards. Cowboy is very much about the entire list of things we’re promised won’t be addressed, and there are resonant political overtones to the show’s depiction of American swagger. But most of all it’s a daring and successful “Through the Looking Glass” journey into illogic. Even without discernible structure or narrative, it’s surprising how effective and precisely conveyed the rapidly changing moods of Sheinfeld and Laor can be. Things are free-floating and surreal but never so chaotic or enigmatic as to be disengaging.

CORE’s colorful work, American Playground, takes on a different subject with a similar approach. Performers in colorful street clothes alternate between children’s games as a group and solo performances that seem to fulfill childhood wishes or childlike fantasies about performance itself. Dancer Anna Bracewell Crowder speaks about her frustrated childhood desire to become a ballerina and then dances a solo from Don Quixote; Joshua Rackliffe performs an over-the-top fabulous drag-style dance and Erik Thurmond sings an emotional rendition of Marianne Faithfull’s “As Tears Go By,” his voice dropping an octave midway through the song just as the singer famously did midway through her career.

The goings-on have a somewhat playful surface, but as with Cowboy, there’s a palpable sense of radioactive illogic to it all, a sense of free-fall, and the whole ends rather somberly with “Moonlight Sonata” and the dancers leaving one by one until a single performer is left alone onstage, unable to continue playing the games or enact his individual performative fantasies, almost all of which depended in some way on the group’s participation, even submission.

Sheinfeld and Laor’s work has an admirable, intangible quality. It never quite settles comfortably on a particular situation, never lets a particular “thing” become the fixed subject of scrutiny or logic, a strategy that certainly sounds as though it would be disastrous. But the opening night crowd was certainly along for the ride, and both works received standing ovations. If performance is a place where fantasy and reality meet, then Sheinfeld and Laor’s work allows plenty of room for both to appear onstage and comingle beautifully.