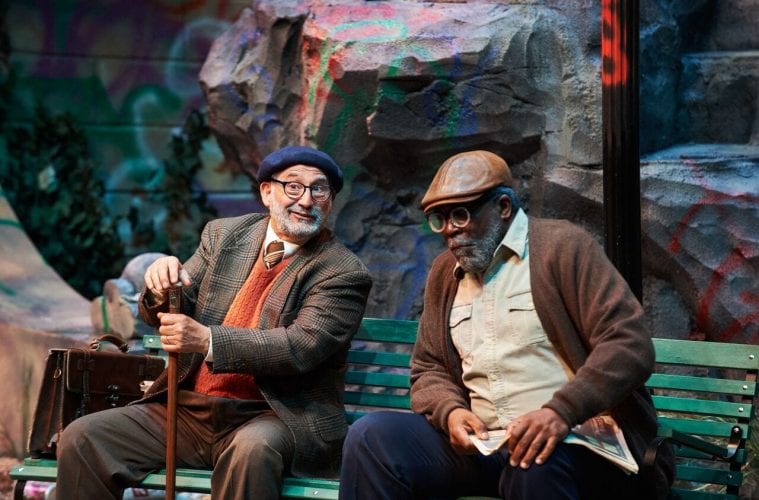 News: Serenbe, Aurora and the Alliance emerge as the big winners in the Suzi Bass Awards

In a night that saw a slew of Atlanta theaters claim trophies, it was Serenbe Playhouse that wound up dominating the field at the 2016 Suzi Bass Awards Monday evening, taking the prize for Best Musical for its bold, outdoor version of Miss Saigon.

The company’s artistic director Brian Clowdus was also named Best Director of a Musical. He recalled leaving New York and coming to Atlanta eight years ago and not knowing much about the local theater scene. “(I would not have believed it) if you told me eight years ago I would be landing a helicopter and have a Suzi in my hand,” he said. “It’s great that people can come here who don’t know what the hell they are doing and start a career for themselves.”

The awards — named after late actress Suzi Bass — were hosted by Topher Payne and Gina Rickicki, directed by playwright and actress Suehyla El-Attar and held at the Porter Sanford III Performing Arts and Community Center, and honored the 2015-16 theater season. The first Suzis were awarded as part of the 2004-05 season with only four categories. This season fielded 29 categories. 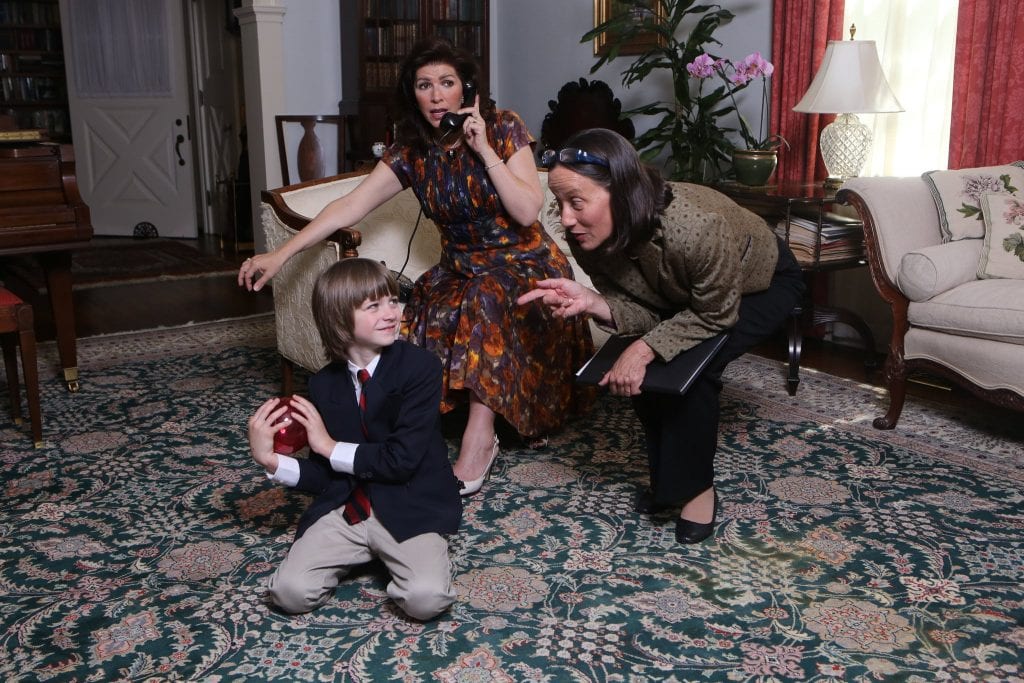 Tess Malis Kincaid (on phone) and Carolyn Cook lead a stellar cast in The City of Conversation, which received the award for Best Play.

Horizon Theatre’s ace political drama The City of Conversation won only one award but it was a biggie — the prize for Best Play. Artistic Director Lisa Adler lauded her ensemble, while director Justin Anderson noted the play’s timeliness in light of this year’s election. Taking home the prize for Best Actress in a Drama, against a very tough field, was Mary Lynn Owen for Aurora Theatre’s Wit. “Sometimes plays arrive in your life at the right time,” she said, praising Aurora Theatre and local playwright Margaret Edson for writing a perfect play. Best Actor in a Drama also went to an Aurora Theatre production — former Atlantan Kenny Raskin for I’m Not Rappaport. Raskin called his Rappaport co-star Rob Cleveland onstage and told him he wouldn’t want any other actor doing the production with him. (The two performed the show together back in 1989 at Theatrical Outfit.) Rappaport took home a Best Director in a Play award as well to David de Vries, while yet another Aurora production, the musical collaboration In the Heights with Theatrical Outfit, collected three awards.

Best Actress in a Musical went to Miss Saigon’s Niki Badua, who was not present but taped a reaction. Kevin Harry took home a surprise Best Actor in a Musical award for Actor’s Express’ Sweeney Todd.

The trophy for Best Featured Actress in a Musical went to Leslie Bellair for her dual roles in Horizon Theatre’s The Toxic Avenger, while Chase Peacock won the Featured Actor in a Musical prize for Miss Saigon. The actor drew some good natured catcalls when he accidentally thanked the Alliance Theatre instead of Serenbe Playhouse for the production. 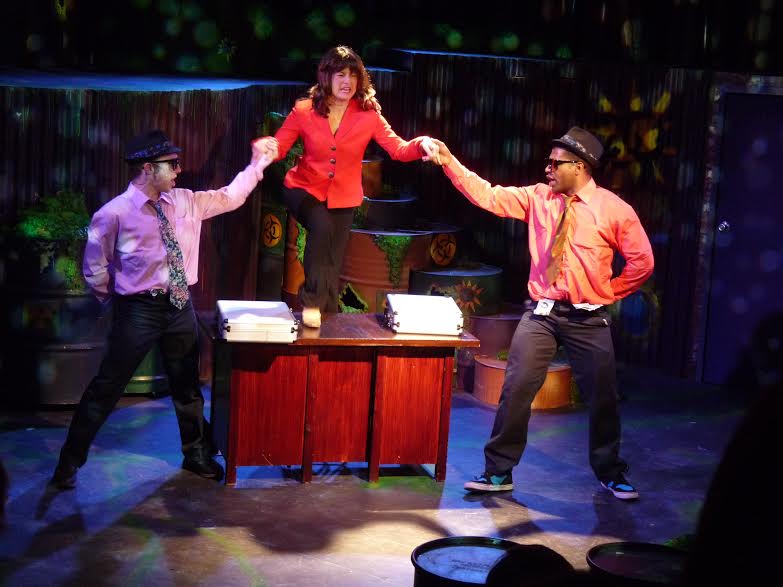 Leslie Bellair (center) received a Suzi for Best Featured Actress in a Musical for The Toxic Avenger. (Photo by Amanda Cantrell)

Eric Mendenhall was the recipient of a Featured Actor in a Play award for his role of Billy Bibbit in the Alliance Theatre’s version of One Flew Over the Cuckoo’s Nest. “In a world that needs more empathy or hope, it is a joy and privilege to be part of being on the ground,” he said. “(Actors) haven’t chosen an easy life but it is a good life. I cherish that.”

The Featured Actress in a Drama award went to Rachel Frawley for her work in Shakespeare Tavern Playhouse’s The Crucible.

Topher Payne’s Let Nothing You Dismay, presented at Stage Door Players netted two awards — Best World Premiere and Best Ensemble Cast in a Play. Payne accepted on behalf of Stage Door’s artistic director Robert Egizio. “I believe our community is defined by the stories we tell together and when we send those out into the world it is a reflection of who we are and the values we have,” he said.

The Gene-Gabriel Moore Playwriting Award went to Lane Carlock and Brian Kurlander for their drama Moxie at Theatrical Outfit. The pair credited the Alliance Theatre’s Reiser Atlanta Artists Lab for helping to incubate the play, Theatrical Outfit’s artistic director Tom Key for his belief in the production afterward and the large cast. 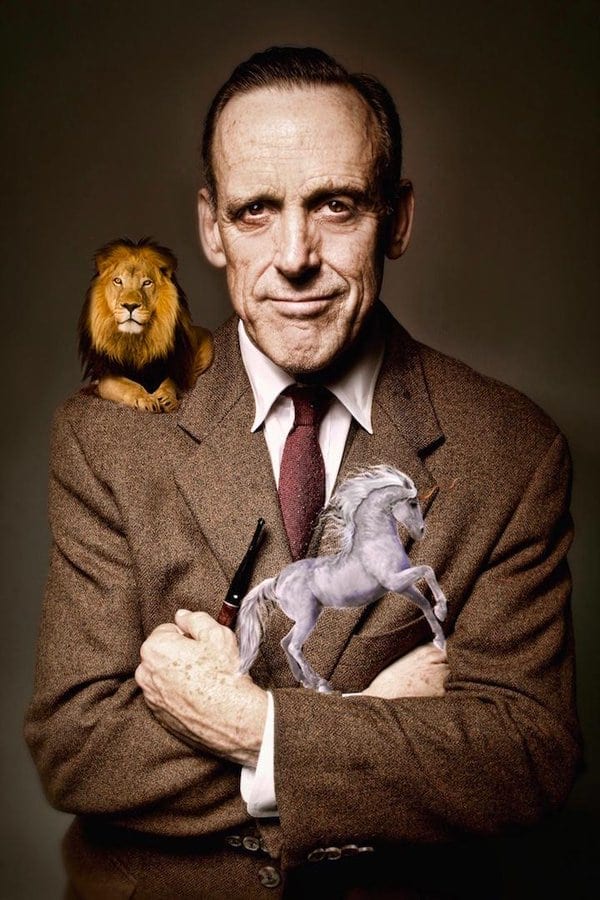 Tom Key in one of his signature roles as C.S. Lewis.

For a second consecutive year, Theatrical Outfit was the recipient of the Audience Choice Award. Key credited a community where such an award could even be given out. “I am so glad that, for 21 years at Theatrical Outfit and for 40 years in this art form, we live in a community with an awards program having a competition about which theater can attract the most audiences,” he said. “What a great contest. We are all winners. To all my colleagues who love theater like I do and honor it more and more as a sacred space, thanks for the blessing of working alongside you.”

Not new to Suzi awards, sisters Isabel Curley-Clay and Moriah Curley-Clay triumphed in two more categories this year for their scenic design of I’m Not Rappaport and then for their costume design for The Toxic Avenger.

The Alliance went five for five in the Theatre for Young Audiences division, sweeping every single award for its plays The Lion, the Witch, and the Wardrobe, A Bucket of Blessings and Pancakes, Pancakes!

The 2016 Lifetime Achievement Award was presented to the family of designer Pete Shinn, who passed away in July. The Alliance’s artistic director Susan V. Booth gave a beautiful, and at times humorous, speech remembering her colleague Shinn. Others remembered as part of the In Memoriam segment were Vic Lambert, Leigh McClelland, Michele McCullough Hazard, Bill Nunn and Brad Thomason.

The 2016 Callboard Award, honoring work by theater professionals in areas not included in the categories of the Suzi Performance Awards — such as stage managers, technicians, front of house and patron staff — was awarded to Cindy Kearns, production stage manager of Shakespeare Tavern Playhouse.

In all, the Alliance Theatre won the most awards — eight — while Aurora scored seven and Serenbe six, all for Miss Saigon. In the Heights, I’m Not Rappaport and The Lion, the Witch, and the Wardrobe followed with three each.