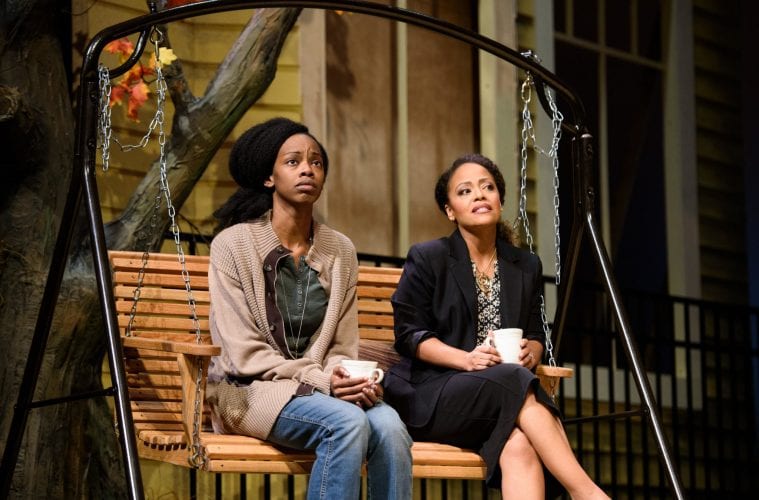 An interesting development happened on the way to the much-hyped teaming of director Tess Malis Kincaid and actress Danielle Deadwyler in the True Colors Theatre production of David Auburn’s Proof this fall. Deadwyler accepted a film role and had to skip the project; New York performer Fedna Jacquet stepped in and took over in a relatively short time. Fortunately the change of leading lady hasn’t hurt the momentum. Running through November 20 at the Southwest Arts Center, the play is vividly staged and acted.

Proof opens on the day that Catherine — the college dropout daughter of a math genius/professor at the University of Chicago — is celebrating her 25th birthday with a bottle of champagne on the steps of the house she shares alongside said father Robert (Gerard Catus). Catherine is down on herself for not having done any major work in the field yet but Robert reassures her that there’s still time, provided she puts in the work required and snaps out of a funk that has made her sleep a lot.

As it turns out, though, this particular conversation is all in Catherine’s head — and she will have more conversations with Robert throughout the play. The reality is that her father has died a week ago and she is preparing for his funeral along with sister Claire (Tinashe Kajese), who now lives in New York. Claire is practical, home to bury her father and take care of family matters — meaning the house and Catherine herself, who seems to have the same mental instability their father had. Claire’s proposal is to move her to the Big Apple.

Catherine has allowed Hal (Eric Mendenhall) a former PhD student of Robert’s, to roam through hundreds of notebooks in her father’s room in the hope of finding something to publish. These two eventually become romantically involved although an early encounter winds up with cops coming to the house.

When a secret pops up amidst all the debris, however, neither Hal nor Claire knows what to believe, much to the chagrin of Catherine.

Auburn’s play debuted in New York in 2000 and won the Tony Award and the Pulitzer Prize the following year. It seems a little overrated now — and its power has worn down a bit, perhaps due to some similar dramas over the years. Nonetheless, it’s a potent piece of theater that tackles such issues as mental illness, the relationship between father and daughters, sibling rivalry and sexism.

Kincaid has long been one of the city’s most dynamic actresses and she brings a calmness to this project. It’s very deliberate — she takes her time and lets the actors build. It helps that her cast is very solid. The men’s roles don’t have the complexity of the women’s but Mendenhall and Catus are awfully appealing here — Mendenhall navigating the waters of discovering who Catherine is and Catus caring for his daughter and wanting the best for her while dealing with his own deteriorating mental state.

Kajese, who has been seen in the Alliance Theatre version of Disgraced and Actor’s Express’ Serial Black Face this year, is a lovely, naturalistic actress. She and Jacquet have some unspoken tension in their relationship, stemming from the fact that Catherine has had to take care of her father in her sister’s absence. Kajese’s Claire doesn’t come across as the villain but instead a woman who is trying to do what she thinks is best for her family.

Proof is, more than anything, an acting challenge for its lead performer. The drama rests largely on the shoulders of Jacquet and she is quite persuasive. She has to walk a fine line — sometimes in control, other times not so much. A few times, Jacquet overdoes it but for the most part this is a gutty, real performance. She’s a woman trying her best to move forward and escape the shadow of her father’s illness.

Moriah and Isbabel Curley-Clay have created another gem of a set. Their aging Chicago house, littered with leaves all over and around, looks authentic. It’s a home that probably has as much pain inside as it does pleasure for Catherine.

As someone who saw the original Proof on Broadway (with Mary-Louise Parker in one of the great stage performances I’ve seen), I’ve been skittish about productions since. The inert movie version with Gwyneth Paltrow certainly did the material no favors. The lure of Deadwyler and Kincaid admittedly drove me here initially, but the superb ensemble Kincaid and True Colors have assembled has made me a believer again. This is a terrific start to True Colors’ new theater season.