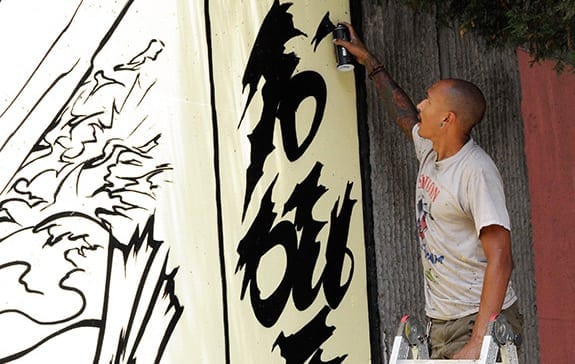 Brandon Sadler’s been going through it. In fact, he still is.

The 29-year-old Gwinnett native and East Point resident is sitting comfortably on a rattan peacock chair in his living room. It’s two days before Halloween, which means there’s less than two weeks before the opening of his latest solo exhibition, TORN (Sketches of War and Triumph) at Notch8 Gallery.

“For all intents and purposes, it’s my uglier side, which I’m very good at doing,” Sadler says of the work included in the show which opens Friday, November 11, and runs through December 18 at Notch8 Gallery. 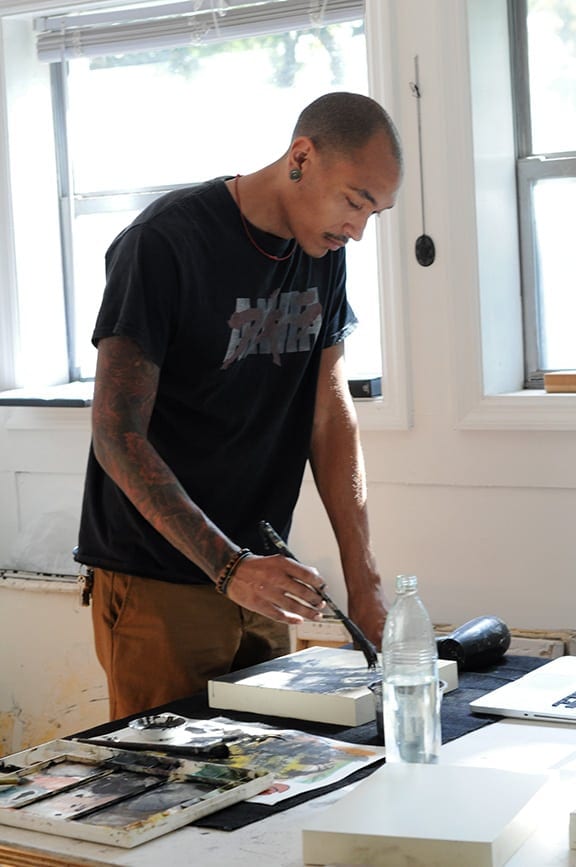 Sadler at his studio with his works for TORN. Photo by and courtesy Kelsey Edwards.

It’s been three years since Sadler’s last solo show, Nothing is Sacred, at Nelson Street Gallery, though the delay is not due to the artist suffering  from idle hands. In fact, he’s been very busy, quite literally, painting the town. Hailed as one of the Atlanta’s best muralists, his large-scale pieces, often highlighted by his signature style fusing street art with Asian tradition, are prevalent all around the city.  Whether it’s the fearsome warrior exploding out of the wall on Wylie Street that he did for Forward Warrior this year, or the three pieces on Windsor Street he painted for Afropunk, the man known as Rising Red Lotus has been able to keep his name in the current pantheon of wall painting greatness.

However, for Sadler, this latest display of creativity is something else. “With a wall, I can tell the whole story in one image,” he says. “With this show, I feel like I was having a visible conflict — it bounces around. I’ve got comics, calligraphy, brush painting, charcoal and design.”

Indeed, one look at the floor where Sadler’s works in progress sit, and you can see all of the different forms his creativity takes — simultaneously scattered, beautiful, scary and hopeful. The comics feature demons named “Guilt,” “Pride,” and “Fear,” doing battles with warriors — and Sadler’s spirit animals — the tiger, mantis and snake. With each character, there are messages involving what the artist calls, “the process of gaining sobriety,” something Sadler says he’s been trying to come to grips with as he approaches 30.

There’s an age-old assumption that the best art comes from the worst of life’s experiences, a notion that is spot-on for Sadler. In the artist’s description of TORN,  he describes the narrative of the works as: “the process of overcoming conflict of the spirit and facing inner demons to achieve peace and a higher state of being.”

To hear him tell it in person, standing over his work, processing the inventory: “It’s like making fantastic narratives of shit I was really dealing with,” he says without going too into serious detail (on the record, at least). “I feel like it’s relatable — people go through this stuff.”

It’s a process that’s been both frustrating and therapeutic for Sadler. Between the murals, commissioned works and freelance there hadn’t been much time for reflection until he felt he had to “get it out there” by way of this work. Though these works are smaller in scale than others by Rising Red Lotus that are better-known, TORN is rooted in themes common in Sadler’s work.

“The mud that my roots, and a lot of our roots, are grown in is full of bullshit and rich nutrients at the same time, and you go through the highs and lows of all this muck in the swamp,” he says. “Eventually, if you’re good at catching those nutrients, you’re going to come out on the surface and be whole.” 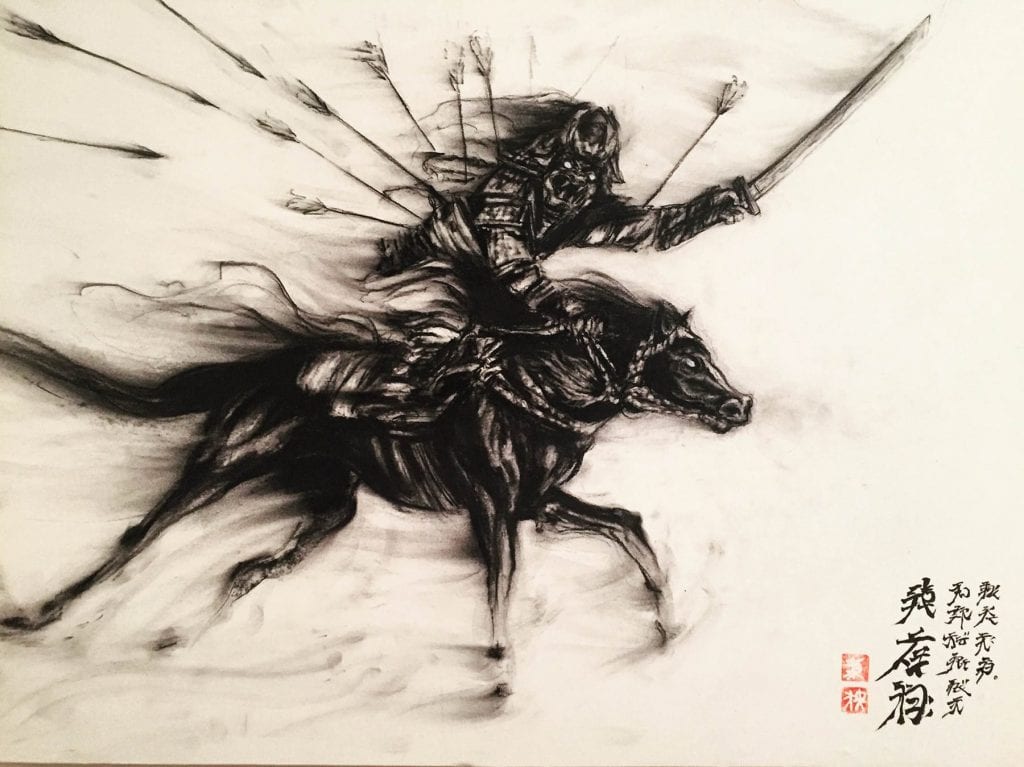 The road to being whole is still ongoing for Sadler. Growing up the product of a Black mother and white father from Virginia, he says he led the cliché life of a mixed-race kid growing up in the South. “I wasn’t accepted by whites, and there were fights and stuff with that. I wasn’t accepted by Blacks because I was light-skinned,” he says. “Later in life, I had this identity shit going on where I was realizing I could be anything because of that seesaw of ambiguity. Now it’s something I embrace.”

It’s also no secret that Sadler’s creativity relies heavily on Asian influences. Reviewing Sadler’s 2010 exhibition Red Dawn, ArtsATL’s critic Jerry Cullum wrote that, “The tension between street art and Asian tradition (which Sadler is by no means the only artist to have exploited) makes for some excellent visual moments.” For some, the first half of that statement could be viewed as a sneak diss, possibly alluding to Sadler being grouped in the dreaded “cultural appropriator” category. Though frankly, that assumption is completely unfounded.

“I don’t think I’m appropriating anything,” he says sternly, harking back to his days teaching English in Korea, which only furthered his childhood obsession with Asian culture. “For me, it stemmed from graffiti. I took a writing system that was created long before my parents were born and I made it into something that was my creative expression and something that I felt good about.”

Another thing Sadler has had to embrace throughout the creative process for TORN is being honest with himself. Some of the work in TORN incorporates Sadler’s own poetry, as well as lyrical assists from Kendrick Lamar’s “HiiiPower,” which includes lines such as, “The sky is falling, the wind is calling, stand for something …” In this sense, TORN is very personal. It’s Sadler’s visual diary.

“Hopefully, I’ll never have to talk about this shit again in this way,” he says. “I’d rather get it out of me and do it in such a way, a blatant way.”

He says the hardest part is building a narrative that travels beyond the confines of just one wall. TORN also includes three installations, highlighted by a rock garden which Sadler worked on at his home woodshop. It may sound like a lot going on — it is. But it’s also necessary for Sadler, as he says, to put all of his cards on the table in the hope of moving forward, past his current demons.

“Outside of artmaking, it’s more so to reinforce the positive aspects of my work,” he says. “It’s just a part of me that I don’t really talk about, and so I’m going to talk about it.”

TORN (Sketches of War and Triumph) will be exhibited at Notch8 Gallery November 11 – December 18.