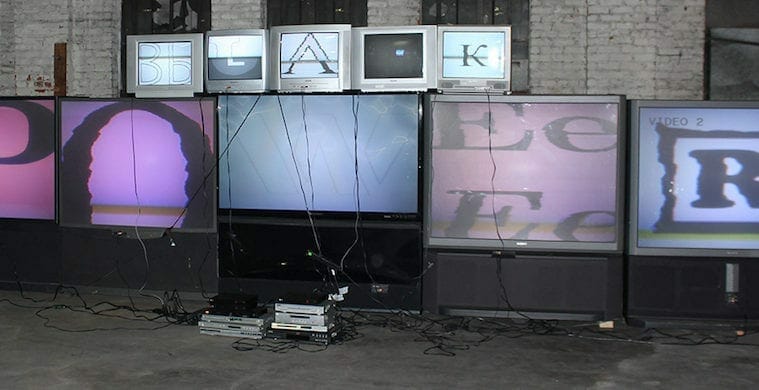 Paul Stephen Benjamin’s sculptural video work is titled "Black Power." He's one of 28 Atlanta-connected artists with work in "PROJECT," an exhibition in the Temporary Art Center, which will close in December when the building is demolished.

Artists have been taking the exhibition of their artwork into their own hands for centuries. Often this happens when they become frustrated with a lack of opportunity and the limited perspective of the art-world status quo.

This has been a particular problem in Atlanta, so artist Scott Ingram has tackled the need head-on with the Temporary Art Center and PROJECT. The work of 28 artists is exhibited in a huge warehouse space in the former Conklin Metal Building at 236 Moore Street SE, just a few blocks from where Mattress Factory shows used to take place in a similar space filled to the brim with work by Atlanta artists.

The city has a long history of artists creating their own venues. Many galleries were founded and are still run by artists — MOCA GA by Annette Cone Skelton; Poem 88 by Robin Bernat; Day and Night Projects by Steve Anderson, William Downs, Mark Leibert and Megan Castro. MINT gallery was started in 2006 by a group of undergraduate art majors. We shouldn’t forget the triumphant exhibitions of the Taboo art group (Larry Jens Anderson is the only surviving member) in the 1990s, which aimed to challenge and prod the consciousness of the public. PROJECT carries on this legacy.

Joe Peragine picks up the torch, making work that is amusingly subversive. In the series titled Field Notes (except for one work titled After the Hunt), he’s drawn and painted his signature snarky icons of forest animals and flora on 10 unstretched canvas panels that measure 11.5 x 7.5 feet. Joe Peregine draws and paints snarky icons of forest animals and flora on 10 large, unstretched canvas panels. A few, like this one, even have peepholes.

In each panel, the animal, tree or flowers are drawn in a way that mocks the illustrational sweetness of greeting cards. That some of the flowers are stuffed pillows sewn onto the canvas accentuates the work’s humor. Peragine’s drawing style ekes as much irony as possible out of his beautifully twisted vision. Field Notes: Rabbit Diorama, for example, has a large peephole cut into the canvas at eye level, revealing a three-dimensional diorama of stuffed and painted flora and fauna. This peek into another physical space adds an edge of voyeurism to the artist’s wild and wacky world. Peragine is at his deliciously naughty self here.

Sonya Yong James’ large Phantom Threads is a long, rectangular column of cascading fibers with soft suspended teardrop pods that hang from the warehouse ceiling in a white waterfall. Although the scale and teardrop-shaped pods are reminiscent of Brazilian conceptualist Ernesto Neto’s suspended works, the column suggests Spanish moss hanging from live oak trees, and the pods have a somewhat sexual reference. The phantom invoked here is the Gwisin, a female spirit from Korean folklore said to inhabit abandoned buildings until she completes a task left undone while she lived. Perhaps now the phantom can rest.

Paul Stephen Benjamin’s sculptural video work Black Power makes you take notice of his message. Five large, antiquated, rear-projection TV sets sit in a row with five equally ancient small computer monitors perched on top. Each screen displays a single letter in a wonderfully lurid and florid color and a found font or symbol. Collectively, they spell out “Black Power.” The letters change and flash in a mesmerizing visual rhythm. Occasionally, one screen intentionally goes black. Using stacked monitors à la Nam June Paik to convey this message is brilliant. The size and scale of the work, the rhythm of the changing text and the use of color and appropriated fonts and symbols render it absolutely powerful.

Photographer Sarah Hobbs creates complex installations, photographs them and presents the resulting images in large-scale color prints. She’s represented here by two large photos, but not to be missed is the small two-room installation Work/Live Site: Museum, Emporium and Home of Sustained Investigation. Hobbs takes her work in a new direction with this installation. It’s like a three-dimensional, minimalist monochrome painting.

The two rooms have faded white walls that have become a sickly yellow beige. They hold images of things once there that have left white silhouettes behind. There is something so quiet and still about these rooms. The past is here. We are in the work, and its narrative of absence and the passage of time is very present.

William Downs — with his monumental black-and-white drawing How Are the Mountains Today? — creates a room defined by canvas walls. It features ink wash and spray-painted images of large, contorted and elongated figures amid stacked drawn figures compressed into the space. Reflective party streamers hang down and scatter on the floor, which Downs considers a different kind of line in his composition. With “How Are the Mountains Today?,” William Downs creates a room of canvas, filling its walls with black-and-white drawings and its floor with reflective party streamers.

This work has the quality of automatic drawing and a densely covered surface inspired by graffiti. The black-and-white compressed bodies convey the purity of the drawn line. The large-scale mural is a pastoral version of 19th-century pointillist Georges Seurat’s A Sunday Afternoon on the Island of La Grande Jatte, if you will. But the large, elongated silhouettes with big feet and hands have a presence all their own.

Michi Meko contributes a suite of unstretched canvases titled Between an Outside Inside: Winter, Spring, the Romantic, Autumn. A Spell Something Other Than Physical. These works, set on a brick wall, offer a dazzling array of how to make marks on a black background that explodes in red, white and gold drawn and splattered elements on canvas. They don’t have the three-dimensional attachments that Meko normally uses and are perhaps stronger for it, as they rely only on the artist’s hand.

PROJECT also includes work by Cosmo Whyte, Xie Caomin, Lonnie Holley and Shanequa Gay, among many others. There are a great many hits in this exhibition, and many misses, but the power of exhibitions like this lies in their ability to create much-needed dialogue in Atlanta’s art world. Art that is made here needs to be seen here. This show is a challenge to curators, artists, gallerists and collectors to make more opportunities for art produced in Atlanta to be shown in Atlanta.