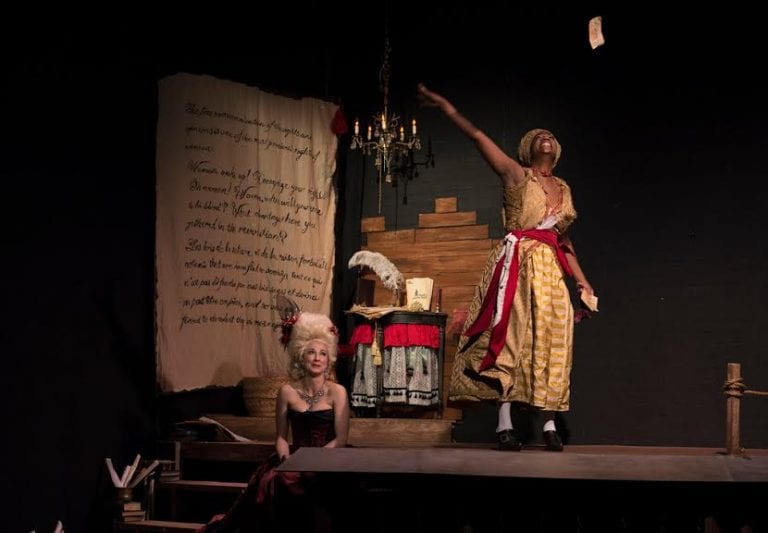 Park Krausen (as Marie Antoinette) and Parris Sarter stand out in The Revolutionist.

Playwright Lauren Gunderson, a Decatur native, is emerging as one of the most noted feminist playwrights in the country. Her play I and You was recently produced at Aurora Theatre and at 59E59 Theaters in New York City, and last year her play Silent Sky received an extended run at Theatrical Outfit.

For her latest work, The Revolutionists, it seems as if she asked herself the question: If you could have dinner with four people from the past, who would they be? She chose Marie Antoinette, playwright Olympe de Gouges, political journalist Jean-Paul Marat’s assassin Charlotte Corday and a Haitian freedom fighter named Marianne Angelle. The play just closed its premiere production at Cincinnati Playhouse in the Park on March 6, and is onstage at 7 Stages through March 20.

Set in Paris in 1793 during the Reign of Terror, the play is meta-theater meets historical fiction, and finds French playwright Olympe (Stacy Melich), trying to write a play about the French Revolution where the women are the heroes.

Her cast of characters includes Charlotte Corday (played with marked sincerity by Rachel Frawley), a fictional Haitian revolutionary named Marianne Angelle (who Parris Sarter depicts as strong and earnest as she fights to end slavery) and Marie Antoinette, who is rendered every bit as over the top and self-indulgent as history has written her through Park Krausen’s impeccable comedic timing. Krausen wears that two-foot tall wig and black-and-red corseted gown as if this is her everyday garb.

In the piece, the characters need the playwright as much as the playwright needs the characters — they are tentative about the way that history will write their legacies, and they believe that Olympe will do them more justice than a man. Marie Antoinette is torn between being shallow and effective; Charlotte cannot decide whether killing Marat will make things better or worse; and Marianne is unsure whether she can beat colonialism.

Ironically, the character who Gunderson writes with the most depth, Marianne, is the one for which she reveals no real historical reference. Throughout the play, this black woman is a source of strength and inspiration for white women who cannot help her, which in itself is a lot for the audience to sort through in 90 minutes. One of the play’s best moments is an argument between Olympe and Marianne about this very thing, when Olympe wants to burn all of her plays and Marianne exclaims, “No one ever writes me down!”

The importance of women being accounted for and written down is the core message of the play, and it is reinforced through Vii Kelly’s set and DeeDee Chmielewski’s costumes, which are by no means ornate or fancy, but do the job. The costumes are sexy, stylized interpretations of gaudy French garments — Marianne’s gold dress has a red sash that says freedom around the waist.

The set features large canvases painted with Parisian street scenes that surround the audience. The small stage area is split into two levels — the lower level serves as a prison and the upper level is the writer’s desk area and also doubles as the guillotine (coincidence or not?). There are large scrolls hanging above the set with excerpts from a declaration of women’s rights painted on them: “Women, when will you cease to be blind? What advantage have you gained from the revolution?”

Gunderson writes the play in modern language to answer just that question. In the script she uses the past to point a finger at contradictions of the time, such as the French fighting for egalitarianism while running a slave colony in Haiti and executing women who speak out against the government, but also about now, when the playwright declares: “I’m trying to help a lot of people without leaving my office.”

The script is full of funny moments that marry the present and past, such as when Marie Antoinette says, “I couldn’t even start a youth fitness program at the palace,” a reference to Michelle Obama’s Let’s Move! program.

The play is very conscious of itself and at times it seems as if Gunderson is taking the audience through her thought processes and internal conflicts of writing the play through the characters’ dialogue, such as when Charlotte Corday says, “Art about rich people’s art is too much,” or when Olympe yells before her execution, “You can’t kill me, I work for a nonprofit!”

History tells the fate of these women — they all face the guillotine, and in many movements it is the women who create change, but they are rarely the scribes. In the execution scenes, Gunderson reframes their famous last words in a way that sketches them as less sensational and controversial and more well-meaning and sincere. Unfortunately, the addition of a song after each woman’s execution does not work, especially in the context of a play that is so deliberate about not being a musical and makes fun of Les Miserables multiple times.

If “crisis demands art,” then Gunderson has written a play that delivers a poignant message in a light-hearted way. This would be a great play, sans some of the profanity, for high school and college drama departments, because historical information about the French Revolution is delivered in an easily digestible way that makes it seem pertinent in the present.

The core of the story is about the way history writes women as crazy, violent and heretical, instead of as smart, forward-thinking and powerful. And even in moments where she straddles the line between being self-indulgent and profound, this point is never lost.