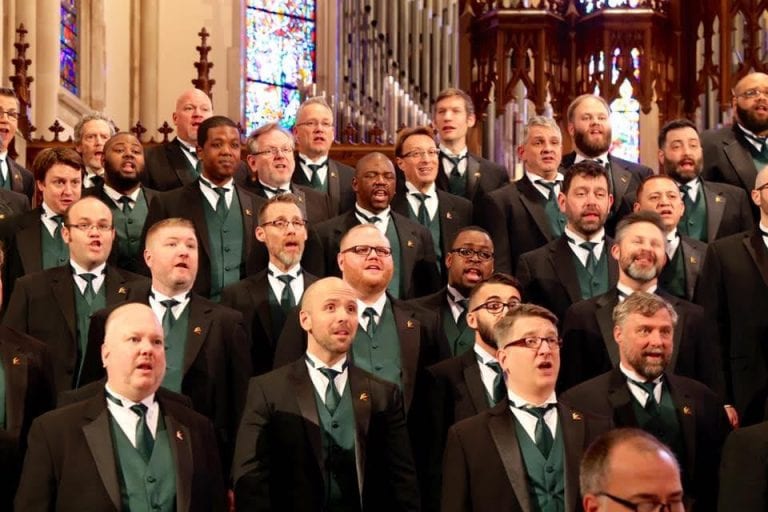 Preview: Voices of Note choruses unite with orchestra for “And Justice For All” concert

The Atlanta Gay Men’s Chorus and the Atlanta Women’s Chorus, collectively known as Voices of Note, will perform together for the first time in a concert titled And Justice for All at Peachtree Road United Methodist Church Friday and Saturday.

AGMC artistic director Kevin D. Robison and his AWC counterpart, Dr. Melissa T. Arasi, will lead 160 singers and an 18-piece orchestra in a musical tribute to conflict and resolution.

The selections include “Ffe Mwe, Mwe Ffe,” sung partially in Ugandan, with lyrics based on the philosophies of Mahatma Gandhi and Mother Teresa that remind listeners to see themselves in others. “The Great Army,” written during the American Suffragette movement, is sung to the melody of the Battle Hymn Republic. And “The Dying Rebel,” an Irish folk song, pays homage to the Irish Republic’s desire for self-determination from Great Britain as demonstrated during the bloody Easter Rising in Dublin of 1916.

While the program touches on some very painful parts of world history, Arasi promises a “truly powerful and uplifting program” in a venue that boasts enormous square footage and heart.

“We are so proud to be a part of the annual concert series of this congregation, known for being so welcoming, and with such a rich musical heritage,” she says. “And its beautiful and acoustically rich sanctuary is a perfect venue for this major collaboration.”

The concert’s centerpiece will be the world premiere of “Libertad,” a multi-movement work for mixed chorus and orchestra composed by Robison. Based on Walt Whitman’s Leaves of Grass, published over 160 years ago, the poetry’s power to inspire critical thinking and advance social change remains relevant today as marriage equality for same-sex couples must be legislated and dog-whistle politics foment violence against marginalized communities.

During his tenure as assistant director of the Gay Men’s Chorus of Los Angeles 10 years ago, Robison started culling Whitman’s text in search of the most powerful passages. Eventually settling on the “Calamus” cluster of poems, Robison feared an all-male scoring wouldn’t fully serve the material that referenced the equality and beauty of women so he put the project on hold. But he never stopped believing in the possibility of changing hearts and minds through music.

“Little did I know that a decade later I would be working with Voices of Note, featuring world-class men’s and women’s choruses that could come together to professionally present such a powerful musical message,” says Robison, who was recruited by AGMC nine years ago. “I am so excited for us to present this work that I hope our audiences will find insightful, moving and empowering.”

The men’s chorus, now in its 35th season, and sister chorus, currently in its third season, are both members of GALA, the Gay and Lesbian Association of Choruses. As the artistic progeny of frontrunners like Robert Shaw, who founded the Atlanta Symphony Orchestra Chorus in 1970, Voices of Note is poised to leave their mark on Atlanta’s arts community and burnish the city’s reputation as the chorus capital of the United States. Bona fides aside, however, the human element is what draws audiences to Voices of Note and binds the singers to one another.

“This is our chosen family,” says Jim Harper, who has been an AGMC member since 2005. “A lot of guys in the chorus have had issues with their biological families either rejecting them or not always being nice to them. Yet when we come in here, we know we’ll always have a welcome spot.”

Beata Ho, an AWC singer since 2013, says the audience can see those friendships and camaraderie in the performances.

“I think they can see that we really care for and support each other,” she says. “We’re more than just a group of people who get together once a week to sing.”

Arasi, whose day job as supervisor of performing arts for Cobb County Schools has her overseeing the curriculum of 250 teachers in her district, agrees. “It’s very important that you connect with people,” she says. “Whether dealing with my faculty and students at school or members of the chorus, it’s crucial for them to know that I care about them. I get much better music out of them that way.”

Likewise, Robison believes concert-goers can expect to get far more from hearing a live performance of And Justice for All than listening to music on a pair of headphones. “Music gives us a break from our everyday worries, conflicts and struggles, and reminds us who we are,” he says. “We can sit down, be transfixed and transported to a different place for a while. As a composer colleague of mine says, ‘I write music in hopes of cancelling out some of the noise.'”