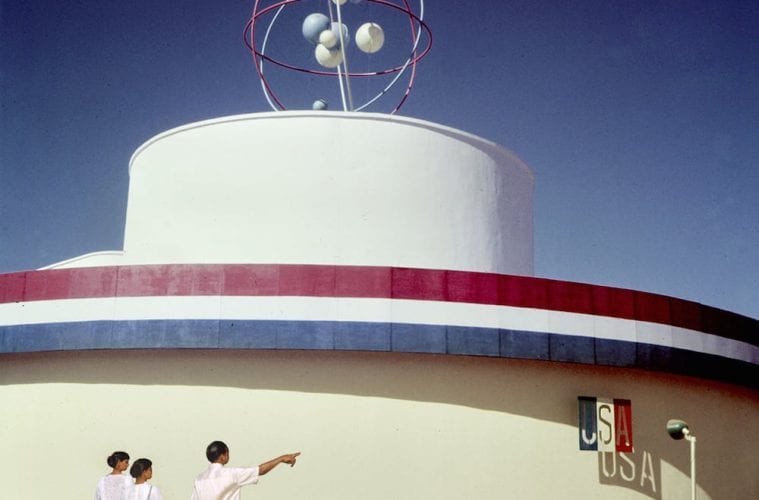 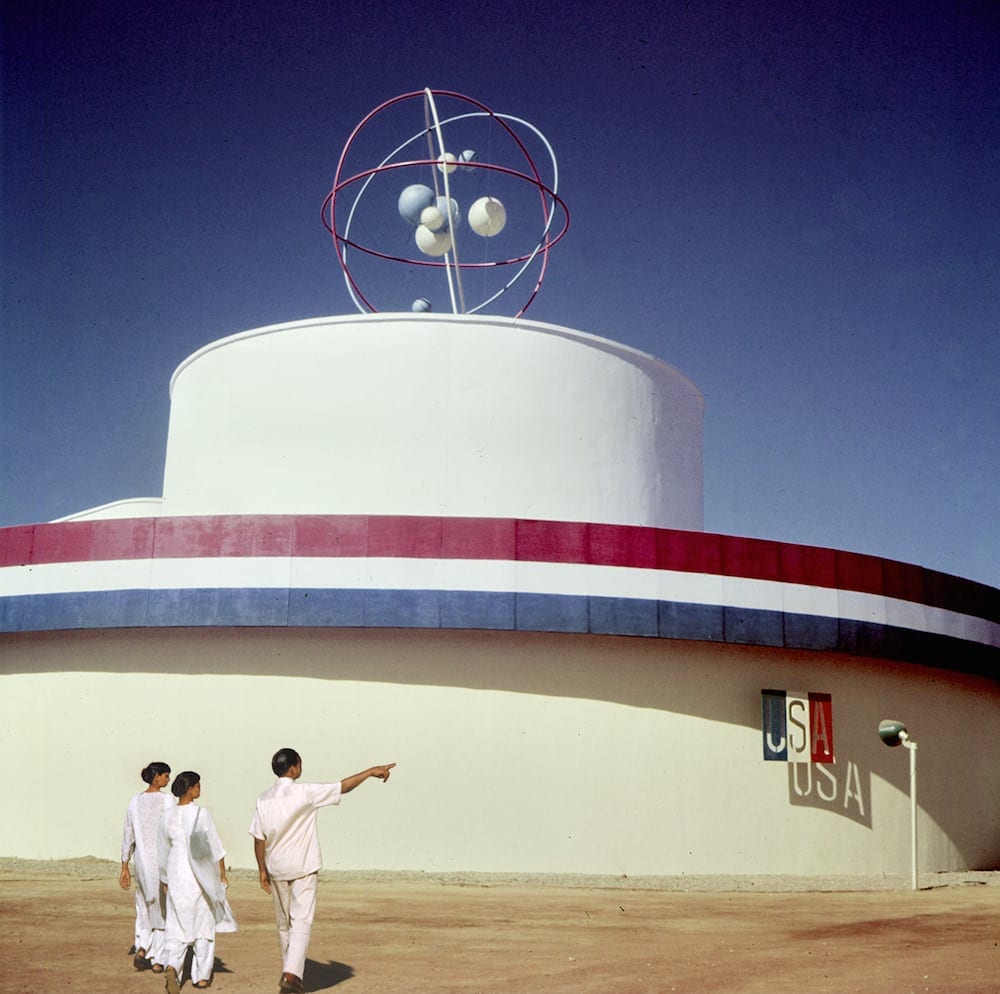 At the height of the Cold War, the United States sought to project the most radiant and positive image of itself to the rest of the world. A new exhibition at the Museum of Design Atlanta traces the seldom-told history of U.S. participation in the optimistic, hyperbolic world of international trade fairs, when the United States Information Agency tapped many of the superstars of 20th-century design to help create the dazzling temporary pavilions meant to impress the world and outdo our rivals.

Make-Believe America, curated by Andrew J. Wulf, Ph.D., the executive director of the New Mexico History Museum, on view through June 12, offers a closer examination of the years between 1955 and 1975, the heyday of U.S. exhibitions abroad, showing not only the development and innovations in pavilion design but also the changing identity the U.S. sought to convey to the rest of the world. Although the exhibition does manage to narrow in on a fascinating topic and some colorful history, there’s a disappointing lack of objects and artifacts overall. The rooms consist almost entirely of wall text and reproduced photos, and the related ephemera that is on display — a few books, programs and magazines –fails to elicit much excitement or interest. Still, the history recounted is a fascinating one. 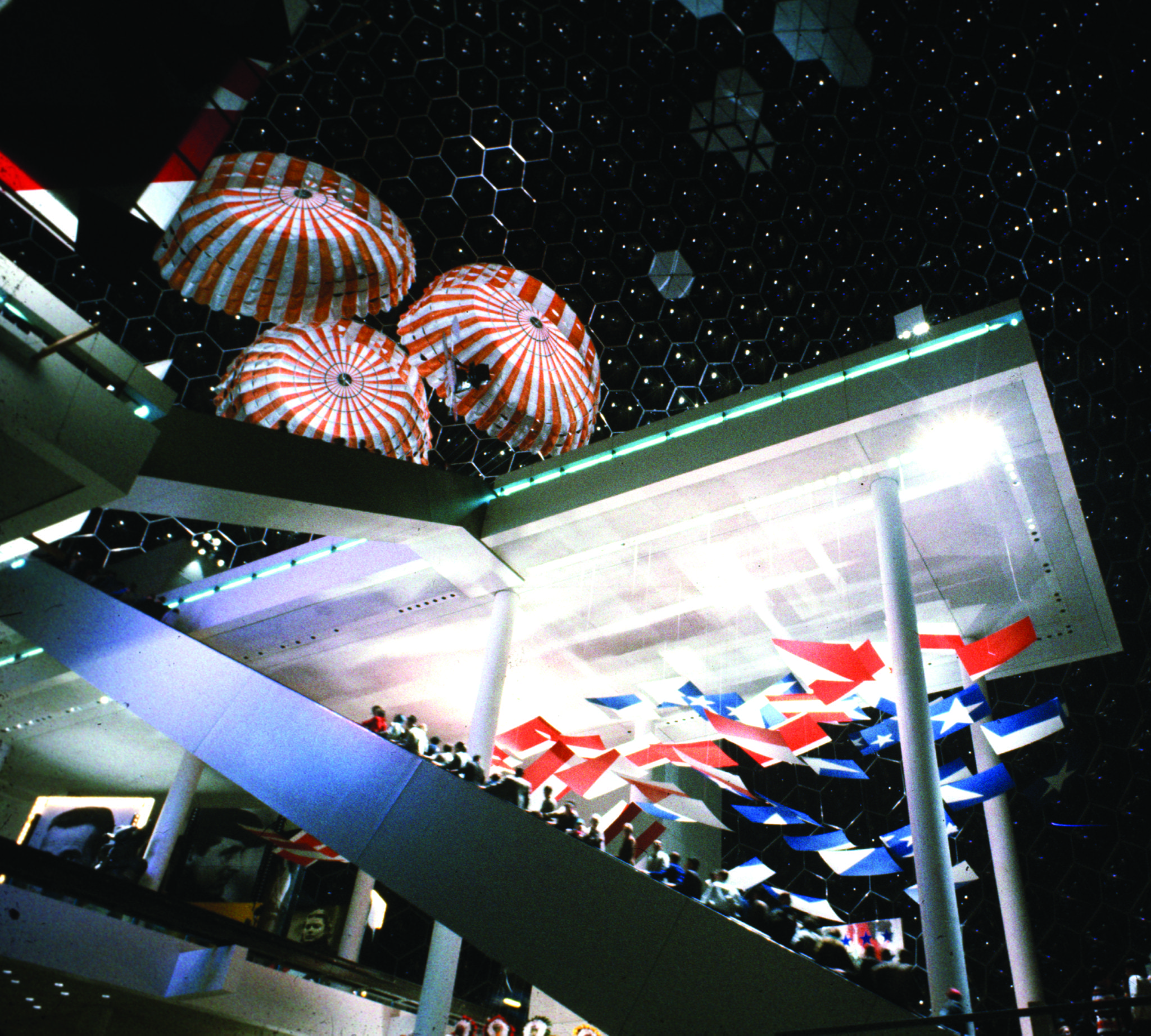 International trade fairs and world expositions date back to the 19th century, but the United States’ approach to such events began to change radically in the mid-1950s, when intelligence information showed that the U.S.S.R. would have strong presences at an international trade fair in New Delhi in 1955. The fair, and the ones to follow, ultimately became a field of competition for the world superpowers who each wanted to demonstrate their advancement and prosperity to an international audience. The fairs weren’t just about showing off a country’s industry anymore, but showing which political philosophy was ultimately superior. The fairs became hot ideological battlegrounds for a Cold War.

The exhibition progresses through the series of trade fairs chronologically by room. Jack Masey — a World War II veteran with experience in the “Ghost Army,” a unit comprised mainly of artists and designers with the mission of deceiving enemy reconnaissance through the use of specially designed inflatable tanks, cannons, jeeps, trucks and airplanes — was tapped to oversee the creation of the U.S. pavilion in New Delhi and many subsequent ones. Wulf as curator interviewed Masey extensively for the show, and his role is given consideration: The final room features a 75-minute film of interviews.

The design for New Delhi — as shown in an abundance of exhibited images showcased at MODA — was an impressive, then-futuristic, atom-like dome structure. But the forward-looking pavilion was also somewhat clunky and heavy: The brick and mortar required lots of human labor and time, and barely reached completion by opening day.

For the next fair at Kabul, Masey had imminent designer Buckminster Fuller create one of his signature geodesic domes, a game-changing move. Unlike the heavy concrete of the New Delhi pavilion, Fuller’s domes were light, airy structures that could go up in weeks. And with any budget cuts or sudden windfalls, the design could be expanded or reduced accordingly with short notice. 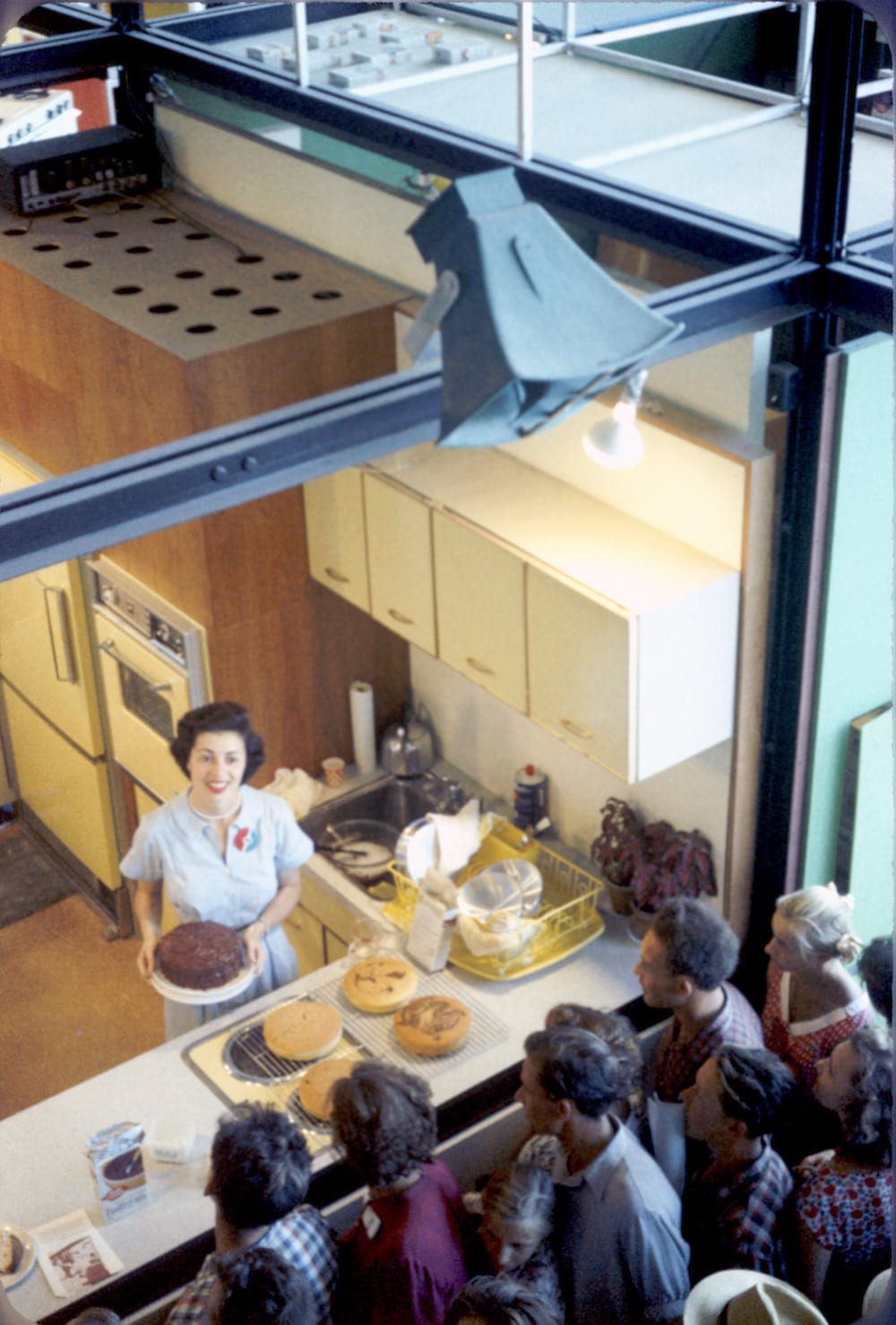 As the 1960s dawned, later fairs saw the country struggling with how to project a complicated, and often troubled, identity. The Soviet Union hammered the U.S. on its unresolved problems with racial strife and civil rights, and military involvement in Vietnam became ever more controversial both at home and abroad. Still, overall, there develops an optimistic, forward-looking, Tomorrowland vibe to the approach. Glistening domes, futuristic monorails, space-age design and sparkling mock-ups of the “typical American home kitchen” became the hallmarks of American pavilions. Lots of images provide insight into the trade fair of Montreal in 1967, among the most interesting and indicative of the country’s efforts in this realm. For that fair, Fuller designed one of his largest domes, with interior lily-pad-like levels connected by escalators. There’s a sense of wit and vibrancy to what the U.S. presented that year, a recognizable and authentic ’60s American chutzpah, emphasizing gee-whiz futurism paired with old-school Hollywood glamor and pop art. Vietnam protestors weren’t barred from the pavilion, adding to the boisterous, democratic, multi-voiced feel.

Overall, the exhibition’s strength is the unusual perspective it gives on a number of familiar design superstars — Charles and Ray Eames and Buckminster Fuller chief among them –shedding new light on their designs by placing them in a specific and often under-examined historical context. The Eames’ innovative bicentennial exhibition “The World of Franklin and Jefferson” gets its own room where visitors can also watch a short meditative film the duo created of the exhibition’s opening in Paris.

In the end, there’s a subtly plaintive note of button-down stiltedness to these old visions of America. As aesthetic objects, the pavilions aren’t always attractive, and their aims are often nakedly propagandistic, a discomforting association since we prefer to think of the best design as being not so blatantly tethered to the goal of political manipulation. Still, Make-Believe America tells a significant story about how there was an interesting time when 20th century design itself became a sort of weapon in the Cold War, one used by a country to launch a beautiful image of itself into the world’s consciousness.