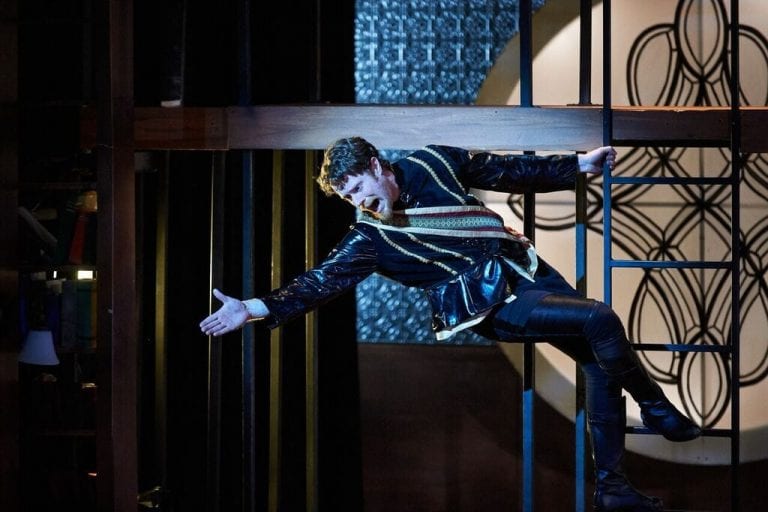 Brody Wellmaker as Rapunzel’s Prince provides comic relief in Into The Woods. (Photo by Chris Bartelski)

Review: Aurora Theatre puts an enchanting twist on Sondheim’s classic “Into The Woods”

It’s considered “mainstream” Stephen Sondheim, in contrast to many of the composer’s other works, but make no mistake — Into the Woods is one dark musical. Its main characters are taken from the likes of fairy tales such as Rapunzel, Cinderella, Little Red Riding Hood and Jack and the Beanstalk. Yet there’s little happily ever after for its characters.

Aurora Theatre is currently staging the classic musical (featuring music and lyrics by Sondheim and book by James Lapine) through April 17, in a production that takes a bit of time to find its rhythm but once it does, it’s tremendously effective.

Director Justin Anderson has given this take his own signature. In his version, a young boy (Evan Jones) is left alone in a library and finds a book, almost beckoning to him, and he reads the story aloud. He becomes the narrator and the library around him becomes the woods.

Soon after we meet the cast — the baker (Brandon O’Dell) and his wife, (Wendy Melkonian) unable to have children; the witch (Natasha Drena) — who has cast a spell on the baker’s wife — and her daughter Rapunzel (Caroline Arapoglou); a young Cinderella (Diany Rodriguez) looking to go to the festival against her stepmother and stepsister’s wishes; Little Red Riding Hood (Shelli Delgado), about to visit her grandmother but finding a wolf in her way; and Jack (Brian Walker) a young lad trying to make his cow give milk and earn some money for he and his mother (Bernardine Mitchell). These characters crisscross throughout Act I and just when it seems like smooth sailing, it’s anything but. 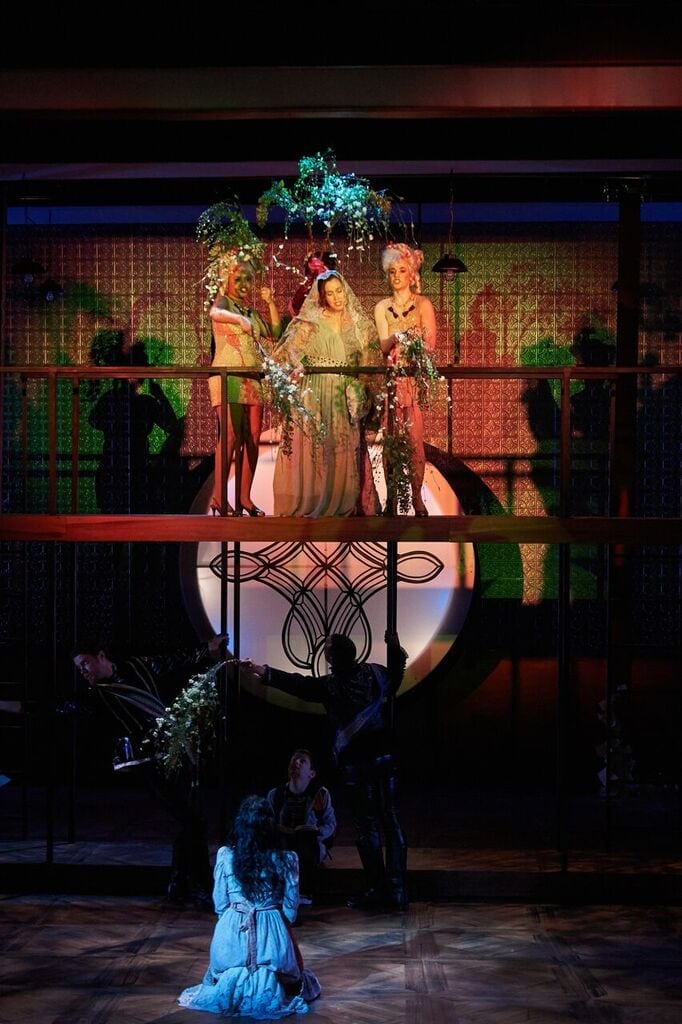 Into the Woods opened on Broadway in 1987 and won three of the 10 Tony Awards it was nominated for. It was written during the AIDS crisis and it has been interpreted to deal with the indiscriminate way some folks lived and others died. Although its themes can be heavy, its score is arguably one of the composer’s most durable.

Musically and conceptually, though, the first act here is somewhat uneven, with great moments followed by some numbers that never really take off. The opening number introduces a lot of information and the cast sells it, while “Agony” — sung by Cinderella’s Prince (Christopher Morgan) and Rapunzel’s Prince (Brody Wellmaker) — is a comic highlight as the regal men talk of their new true loves. Rodriguez, too, has a lovely “On the Steps of the Palace” as she leaves one of her slippers for her prince.

At times the narrator is onstage weaving in and out of the action and it can be awkward. It can seem cluttered, with choreographer Sarah Turner Sechelski’s work feeling a little confined and restricted. Anderson’s concept is a bold one and he deserves credit for trying it. Yet it doesn’t add that much dimension. The woods, even if they are a metaphor, need to be an essential character and they really aren’t here.

Yet the second act, much shorter and sharper, pretty much gets it all right. The concept makes more sense and has emotion aplenty. Music director Ann-Carol Pence leads a 12-person band as impressively as always. Set designer Jason Sherwood’s library works admirably enough in the context, opening up to let characters run along in and below its scaffolding, while Elizabeth Rasmusson does a beautiful job costuming the characters and making them distinct.

It would all be for naught, however, if the cast wasn’t so rich. When the entire ensemble comes together and sings, it’s musical theater heaven. Even the smaller roles — such as Googie Uterhardt as the Wolf — have bite. Particularly memorable are Delgado’s snarky teenage Red Riding Hood, Melkonian and O’Dell. Drena seems a little trapped behind her witches costuming early on but she is on fire in the second act, leading a thunderous “Witch’s Lament” as her world declines.

Yet the MVP here is Rodriguez, an Into the Woods veteran who played Red Riding Hood in the 2011 Alliance Theatre version. She gives Cinderella a yearning one moment, a playfulness the next, and then a sad reality. The second act reprise of “No One is Alone,” anchored by Rodriguez and O’Dell, their voices overlapping, is truly one of the sweetest, most poignant musical moments in a while. It’s likely to leave goosebumps.

With the likes of Clyde ‘n’ Bonnie, Les Miserables, Mary Poppins and Memphis behind then in recent years, it’s clear that no one in town appreciates musical theater the way Aurora Theatre does right now. There’s simply no denying, as well, that the company is doing musicals better than anyone else in Atlanta right now. It takes a while to find its footing, but when this version of Into the Woods kicks in, it’s a journey well worth taking.