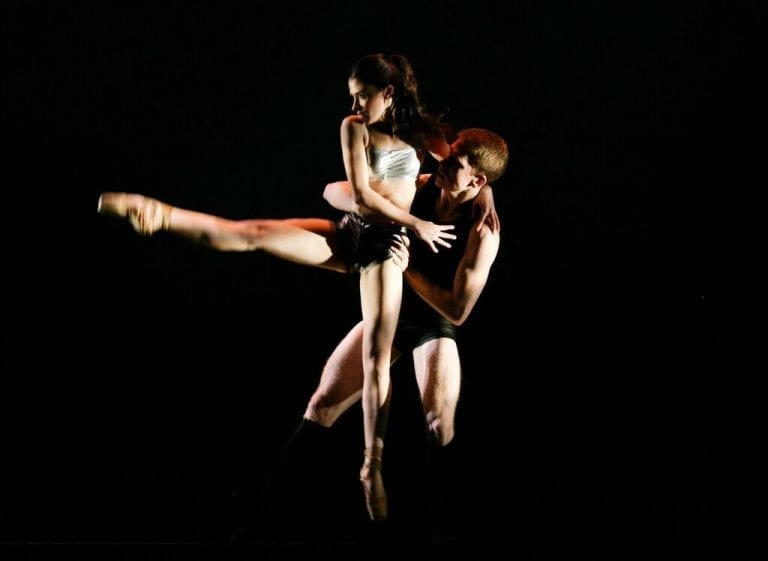 Nadia Mara in "Boiling Point," one of their pieces in Atlanta Ballet's 20/20. (Photos by Charlie McCullers)

Atlanta Ballet’s third show in the final season of artistic director John McFall, 20/20 will feature three contemporary works commissioned by the ballet — two from previous years and a third that will receive its world premiere this weekend.

20/20 will be staged Friday through Sunday at the Cobb Energy Performing Arts Centre, with two performances on Saturday and a Sunday matinee. 20/20 will showcase some of the strengths of McFall’s 20-year reign at the ballet as he pushed the company to embrace and stretch out to do contemporary works by modern, cutting-edge choreographers.

The two repeat shows are Amy Seiwert’s “Home in 7,” which had its world premiere in 2010 and is Atlanta-centric with spoken word poetry by Morehouse graduate Marc Bamuthi Joseph and music by composer/violinist Daniel Bernard Roumain. The piece received strong critical kudos when it closed the 2010-11 season. ArtsATL’s Cynthia Bond Perry praised Seiwert’s “bold, sharp, kinetic style.”

Also featured is Darrell Grand Moultrie’s “Boiling Point,” a contemporary work commissioned for Atlanta Ballet in 2008. Moultrie is a highly sought-after choreographer who has worked with Beyoncé and Tony-winning director Diane Paulus.

The performance is headlined by British choreographer Douglas Lee’s “Playground,” an original piece that he composed with the input of Atlanta Ballet’s dancers. “Playground” is rooted in childhood, both the playful innocence and the darker moments that can each shape how we view the world as adults.

Lee’s work has been performed by numerous companies, including New York City Ballet, Nederlands Dans Theater 2 and the Stuttgart Ballet. A native of London, Lee trained at the Royal Ballet School and then joined the Stuttgart Ballet, where he became a principal dancer.

Lee still carries himself as a dancer, and his chemistry with the performers in his piece reflects his awareness that he was once where they are — he didn’t come to Atlanta to dictate, he came here to collaborate. He sat down with ArtsATL before a recent rehearsal to discuss “Playground,” and to talk about his journey as a dancer and a choreographer.

ArtsATL: What is the premise of “Playground”?

Douglas Lee: I started off with this idea of doing something with childhood play. The music has a lot of childhood things — a clockwork element, a lullaby, a music box — things associated with childhood. So I took that and when I was building the piece, I thought about what those associations mean for me now.

The piece has a hide-and-seek element, walls with school board pictures. So it has that playfulness. It also has almost a sinister side; what should be innocent and childlike can be scary. I wanted to incorporate that into the piece. Some of the moods are lighter; some moments are dark and sinister.

ArtsATL: How did you connect with Atlanta Ballet?

Lee: A few years ago, I sent some work out to companies I was interested in working with. Atlanta Ballet has a wide-ranging reputation; in addition to classical ballet, the company also has an experimental side with modern works. One of their dancers, Jacob Bush [currently out with a leg injury], danced for a time in Europe and he was in a piece I choreographed. I think he also brought my name up with John McFall. A year and a half ago, John and I began to talk and it all fell into place.

ArtsATL: How is it working with Atlanta Ballet?

Lee: I’m very comfortable here, and it’s been a real pleasure. You can tell immediately when you go someplace which companies have brought in new choreographers before, and which companies have dancers who are used to only dancing in existing work. Doing a new work is a completely different experience, and you can tell which companies have experience with that. Those that do have that history, it makes everything go much quicker. You can work on details rather than the overall framework. The dancers here are great; they are open and quick. They have the qualities you look for when you’re staging a new work.

ArtsATL: You were a successful dancer for the Stuttgart Ballet who transitioned into choreography. How did that come about for you?

Lee: I was lucky on one hand. I started to choreograph early in Stuttgart. In my early 20s, I went from a dancer who occasionally choreographed to a choreographer who occasionally danced. For me, it was a fairly natural progression. And it’s more of a juggling act than people know when you’re doing both. Dancers don’t necessarily know the stress that can go into choreographic work. The mental transition can be difficult. It’s easier if you’re in a creative environment to begin with.

ArtsATL: One of the lead dancers in your piece, Tara Lee, has emerged as a quite promising choreographer.

Lee: Yes. She and I actually talked about that yesterday. With Tara, I consider it such a collaboration. When I’m choreographing a piece, the dancers bring in ideas. Every dancer has different strengths and there are many ways to say something. I want to draw on a dancer’s strengths. It’s insane not to have that flexibility when you come in to work with a company. That’s part of the enjoyment.

ArtsATL: What do you hope the audience will take away from watching “Playground?”

Lee: Because of the title and subject matter, I don’t want to confuse the audience. With the name “Playground,” people may expect games and lightness and playfulness. There are two opposing ideas I wanted to bring with the piece — the dark and the light. It’s also important that people can watch something and make their own story, and not feel like it’s something they desperately have to follow. I want to create more of an atmosphere, changing colors. Then the audience can use their imaginations when they view the piece to decide what it’s about.