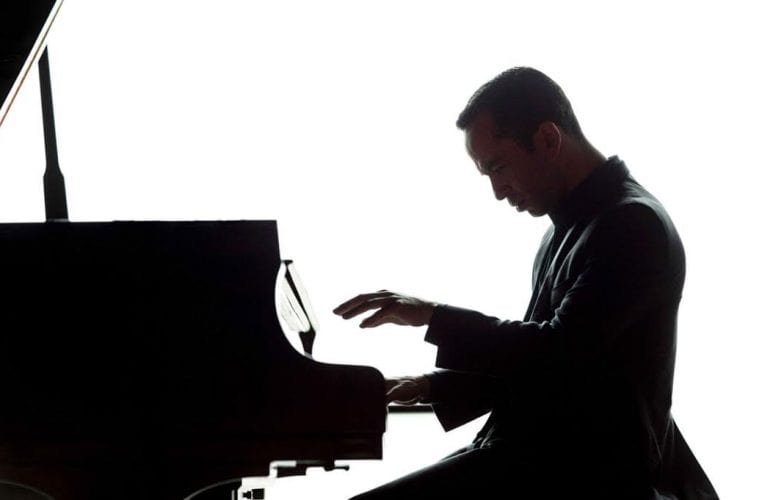 Barnatan made his impressive Atlanta debut in May 2013 as a last-minute substitute for indisposed pianist Marc-André Hamelin, performing Beethoven’s Piano Concerto No. 4 with the Atlanta Symphony Orchestra. He returned to the ASO stage in January 2015 to perform Mozart’s Piano Concerto No. 24 in C minor.

This Spivey Hall performance opened with Johannes Brahms’ transcription, for left hand only, of J.S. Bach’s famous Chaconne in D minor for solo violin. Unlike the massive piano transcription by Ferruccio Busoni, this one by Brahms is lean and attempts to reflect the effect of the solo violin to the extent that a piano can. Barnatan gave it a noble performance. Although he was playing piano, he was clearly aware of the challenges that are idiomatic to the original instrument, the violin, and brought some of those elements into his musical approach.

Barnatan has been acquiring a good bit of critical acclaim for his performances of the music of Franz Schubert, so it was no surprise to see on the program that composer’s late Sonata in G major, D. 894. In contrast to the piano sonatas of Beethoven, whose dramatic personality loomed large throughout Schubert’s entire short life, the success of Schubert’s own sonatas hinge upon their lyrical luminosity, his capacity for song. Barnatan brought out the best of these qualities in a thoughtful, emotionally insightful performance which illuminated both the Classical and Romantic aspects of the composer’s style.

So far, Barnatan has recorded Schubert’s final three piano sonatas — in B flat major, C minor and A major (D. 958-960). One might easily expect a recording of this Sonata in G major to be forthcoming at some point in the reasonably near future.

Although he has been acquiring a bit of a reputation as interpreter of Schubert’s music, Barnatan is also a champion of modern and contemporary composers. Thus the most unusual and interesting work on this program, “Musica ricercata” by Hungarian composer György Ligeti (1923-2006).

Ligeti was a Holocaust survivor, sent to a forced labor brigade by the regime of Miklós Horthy. After World War II, he continued his musical studies then taught music theory at the Liszt Academy in Budapest. Under the shadow of Soviet-bloc artistic dogma, Ligeti’s serious compositions remained unpublished. He escaped Hungary after the failed anti-Soviet uprising of 1956, settling in Vienna, Austria. Ligeti gained a worldwide notoriety when four of his compositions were featured in the soundtrack to Stanley Kubrick’s 1968 film, 2001: A Space Odyssey.

Although it was not premiered until 1968, “Musica ricercata” dates from the early 1950s during his time teaching at the Liszt Academy, so is of an earlier, different style than the music in the Kubrick film. One can hear influences of Bartók and a bit of Stravinsky, but there is also some theoretical gamesmanship involved. Each of its 11 short but varied movements increased the number of pitches that the composer used in it: No. 1 used just two pitches (and their octave transpositions), No. 2 involved 3, all the way through No. 11, a tranquil but complex fugue, used all 12 pitches of the chromatic scale. It was an intriguing performance. The next time Barnatan visits Atlanta, he should bring more of his contemporary repertoire along for the ride.

The final work on the listed program was another of Brahms’ take on music of a Baroque composer, his “Variations and Fugue on a Theme by Handel,” Op. 24. Based on a theme from Handel’s rather ordinary Harpsichord Suite No. 1, Brahms wrings everything he can from the tune in 25 variations and a final fugue. By the second variation, it becomes distinctively the voice of a youthful Brahms and you might as well forget that Handel had much of anything to do with it — a thought with which Barnatan’s delightful performance seemed simpatico.

Barnatan returned to the stage for an encore; Schubert’s Impromptu in G-flat major, Op. 90 No. 3. At nearly six-and-a-half minutes duration, it felt a little long for an encore, but the relaxed melodic flow of its dreamy melody offered up an appropriate mood with which to cap the program. Barnatan included it as the final track on his CD of Schubert’s C minor and A major Sonatas, and has also made it available on YouTube.

In unrelated news, Spivey Hall not only kicked off its new season on Sunday, but also a new campaign to acquire a “companion” piano for its “Clara” Hamburg Steinway. The objective is to find an instrument that is “complementary” to Clara — to be named “Robert” — rather than an identical match, for the purpose of expanding the repertoire for which Spivey Hall’s group of Steinway pianos may be best suited. The “Emily” New York Steinway remains in the room’s cache of instruments for artists to choose from, while its other New York Steinway — “Walter” — has found a new home in the chorus rehearsal room of the adjacent music building. Spivey Hall’s goal is to raise $225,000 to support a patient, careful search for “Robert” and its successful acquisition.