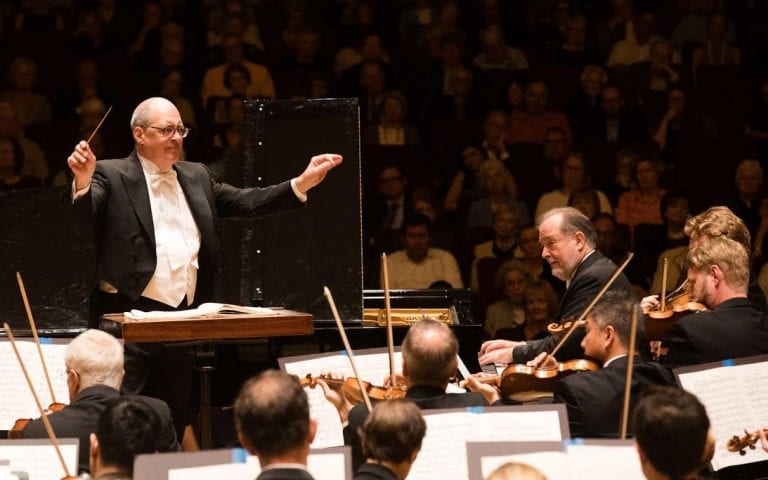 On Thursday evening the Atlanta Symphony Orchestra, under the baton of music director Robert Spano with pianist Garrick Ohlsson as featured guest soloist, opened the first week of its classical season at Atlanta Symphony Hall with a performance of music by Adams, Sibelius and Rachmaninov. The ASO will repeat the program on Saturday evening at Symphony Hall and then again on Sunday afternoon in Athens at the Hugh Hodgson Concert Hall on the University of Georgia campus.

In a time-honored tradition, this first program of the ASO’s new season opened with orchestra and audience joining together in our national anthem, as arranged by Walter Damrosch. The gentleman to my right placed his hand over his heart as he sang. “I wish it always sounded like that!” confided the woman to my left after it was over. She’s right. It is at its best when done straight-forwardly, by the shared voices of an assembled public. Despite the musical and social criticism it sometimes receives, “The Star-Spangled Banner” remains a stirring, essential part of the fabric of our nation’s common voice.

The concert continued with another American work, the brief fanfare “Tromba lontana” (“Distant Trumpet”) by John Adams. This was the first in a series of performances of that composer’s music by the ASO this season, in celebration of his 70th birthday. Written for the Houston Symphony, “Tromba lontana” is a kind of anti-fanfare, deliberately countering the stereotype, barely ascending above a moderate volume in its course.

The work features a pair of solo trumpets physically separated from each other, which gently call and respond to each other continually over the light but steady pulse of the underscoring orchestral texture. Principal trumpet Stuart Stephenson and acting associate principal Michael Tiscione played offstage, left and right respectively, each behind open doorways of the acoustical shell, affording an impression of being heard at a distance.

The music of Jean Sibelius has proven to be a specialty of Spano, and the composer’s Symphony No. 5 is no exception. It is an intriguing work both in its harmonic language and formal structure, the first movement alone worthy of thoughtful study. Sibelius greatly transforms the textbook Sonata form while alluding to it, both with a modified second exposition of the four main themes introduced and an unusual recapitulation in triple meter that replaces the need for a separate Scherzo movement.

Many conductors try to hurry along the first part of the movement to try to make it seem “more exciting.” But Spano allowed it to unfold and evolve at a pace more on the score’s own terms, drawing the listener into the music’s more organic sweep and pace. By the time the scherzotic latter part arrived, the ear was prepared for it and the momentum that drew the movement to a rousing conclusion. Parts of the slow second movement, its theme and variations, slyly foreshadowed elements in the energetic final movement, which ends with a bang in what program annotator Ken Meltzer refers to “six hammer-blow chords” — made all the more emphatic by the long, self-conscious spaces of time between them.

A longtime friend of the ASO, pianist Garrick Ohlsson first performed with the orchestra in the 1970s, not long after he won the Chopin International Piano Competition. He was also the first soloist with whom Robert Spano collaborated in his professional conducting debut with the Boston Symphony Orchestra in the 1990s. At Ohlsson’s instigation, well over a decade later, the two collaborated in recording with the ASO a work which, astonishingly, the pianist had never committed to disc: Sergei Rachmaninov ‘s Piano Concerto No. 3. They performed, then recorded, the work in 2009, and it was released on the then-new ASO Media in 2011. This week’s performances of that same concerto come just one month shy of the fifth anniversary of that CD’s commercial release.

Well beyond his formidable technical confidence, Ohlsson has a profound grasp of the concerto’s musical depth that avoids mere flash and show, though there is virtuosity in abundance in this demanding work. Ohlsson brings out the composer’s innovation and creative range — in this particular performance he especially countered the fast and furious passages with interpretive moments of almost chamber-music-like intimacy. The return of the opening theme late in the first movement was so hushed that it demanded the listener’s full attention. On the one hand, it marks a formal reassurance in its return to the scene, but in Ohlsson’s hands it also offered something new and compelling to express.

The monumental, athletic cadenza of the first movement was thrilling, thunderous, but also essential to the musical architecture. Ohlsson, Spano and the orchestra likewise did not fail to please in the rest of the work, bringing out the complete compass of its expressive spectrum all the way to its electrifying conclusion.