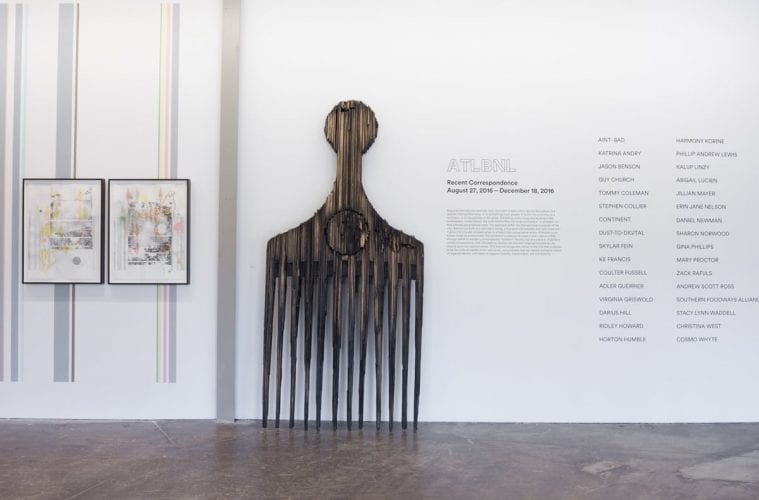 Review: ATLBNL leaves us with more crowded confusion than clarity

The Atlanta Biennial is back! After a nine-year hiatus, Atlanta Contemporary announced its return in July and its revamped name: ATLBNL. It’s distinguished from group shows at the Atlanta Contemporary by its designation as a biennial — a moniker that harks back to the inaugural Venice Biennale of 1895. In the 1980s and ’90s, the biennial phenomenon grew, and a centerless, inclusive art world was proclaimed. Though, in more recent years, critics have claimed that these purportedly global shows are merely another avenue for the West to showcase itself and underrepresent everyone else.  Despite such criticisms, they remain heavily publicized, well-attended events.

Within the United States, the Whitney Biennial is the premier national biennial, the latest of which took place in 2014. Out of the 103 artists and artist collectives featured, only 12 were born in the South (that includes those historically questionable states, Florida and Texas). Just one artist actively lived in the South — that is, if you generously consider Austin, Texas, Southern. The continued marginalization of the South despite its growth in the artistic market parallels the biases of  biennials globally. No doubt economics are a major component — places that financially support art have art — but it also seems that old prejudices don’t die easily.

Enter the return of the Atlanta Biennial, inaugurated in 1984 by Nexus and on pause since 2007.  Atlanta Contemporary’s Daniel Fuller was joined by three other curators: Victoria Camblin (ART PAPERS, Atlanta), Aaron Levi Garvey (Long Road Projects, Jacksonville), and Gia Hamlin (Joan Mitchell Center, New Orleans). They decided to only show artists never featured in former Atlanta Contemporary biennials — an approach that, though unstated, is predominantly consistent with past Atlanta Biennials as well as a common tactic to ensure that things stay fresh. In fact, the curators also seemed intent to distance themselves from earlier Atlanta Biennials, a conversation that has sparked some controversy. Eschewing fixed notions of Southern identity, the vague but promising notions of “regional mobility, transmission and connectivity” served as the 2016 ATLBNL’s guiding framework.

Which begs the question: what’s quintessentially Southern anyway? Sweet tea in a mason jar? I think not.

While I respect the curators’ disavowal of easy clichés of the South, this notion should have been prodded a little more. More curatorial commentary and the identification of a handful of themes would have benefited the exhibition. For example, it seems necessary to contextualize the work of the exhibition’s two self-taught artists (Mary Proctor of Gainesville, Florida, and Guy Church of Memphis) in a room full of mostly academic and institutionally-affiliated artists.

One of the inherent difficulties of the ATLBNL is the space itself. Though big, Atlanta Contemporary’s galleries aren’t large enough for 32 featured artists. In order to deal with the dearth of wall space, the curators got creative. Atlanta’s much-lauded music label Dust-to-Digital was given the interior of wall cut so that viewers can look through a small window to see room wallpapered with old Atlanta newspapers and an RCA Victor radio playing sounds from the teens. A crowd-pleaser? Certainly. Art? I’m not sure. Another question begged: Does institutional recognition alone create art? Whatever its complications, the work highlights the label’s significant contributions to the region, though its location in the peripheral space of the gallery thematizes its uneasy inclusion in the biennial. 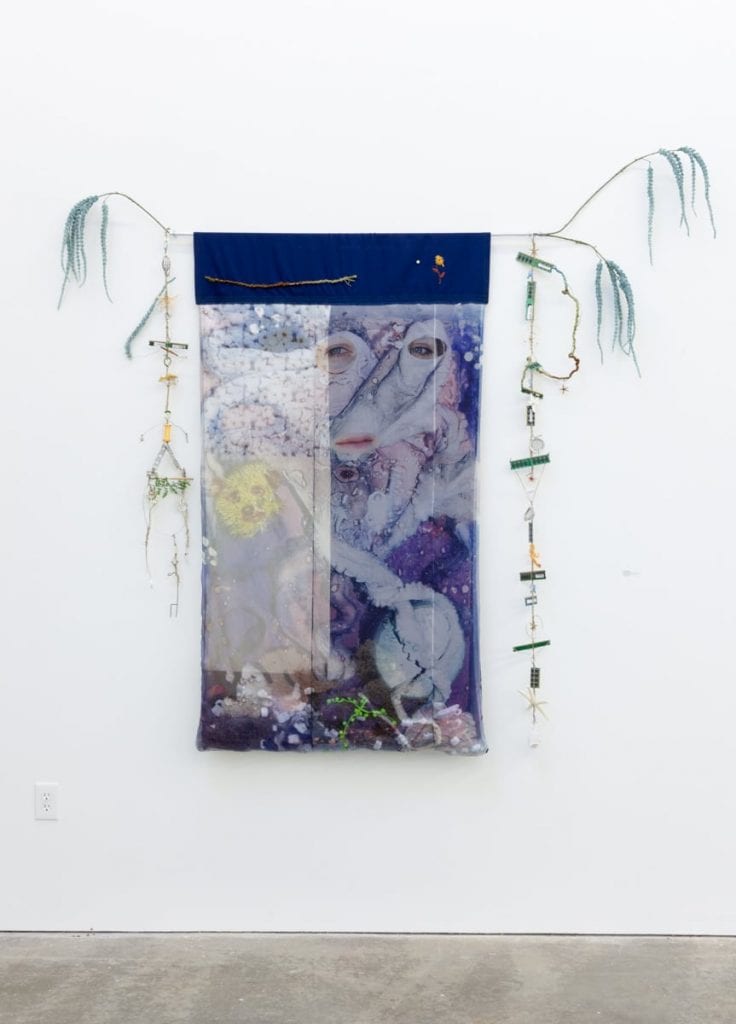 One of the best uses of space is the installation of Chattanooga artist Phillip Andrew Lewis’ Distribution in Red, which occupies its own darkened room. A black square that emanates reddish light, it recalls Modernist and Minimalist strategies alike. On closer inspection the source of the light is revealed to be more Pop in inspiration: a red and white KFC sign featuring Colonel Sanders. It implicates the colonel, burdened by the myth of the Old South, as a cheap, troubled icon of Southern culture. Though radically different, a sculpture by Tommy Coleman of Jupiter, Florida, has a similar ethos of droll seriousness. Mosquitoes is a screened room built from reclaimed pine. Text-based drawings covering its interior include banalities and heartfelt anxieties (“MY THERAPIST SAYS THIS IS HEALTHY”) as if to suggest the myriad, fleeting worries that are as vexing as the South’s titular mosquitoes. Coleman’s Remember Me is a modern memento mori: a pile of blank Formica laminate gravestones, collected inauspiciously in a corner.

A big sculpture with big themes, Funkadelic Relic by Birmingham artist Darius Hill commands Atlanta Contemporary’s foyer. An oversized wood-and-acrylic pick comb, it leans against the wall next to the brief introductory wall text, and its prominent placement situates its implicit concerns — race in America — as crucial to the biennial. Recognized since the 1970s as signifier of Black identity and activism, the hair accessory’s importance as cultural icon is evidenced by its monumental scale. Relatedly, St. Petersburg-based Sharon Norwood’s doctored 19th-century images in which curly Black hair engulfs the faces and bodies of the all-white protagonists as if to show another, imagined history.

Kalup Linzy’s nearby sprawling installation — 83 collages and two screens looping videos that recount the trials and conflicts of the fictional Queen Rose Family — debuted at this year’s Sundance Film Festival. Linzy, a native Floridian based out of Tampa, dons various wigs and costumes so as to lampoon soap operas and reality TV. His characters throw insults at one another (“She’s crazy. There she goes and turns being a slut and whore into an art form — performance art my ass!”). Linzy’s work breezily transgressing borders of gender, sexuality and race — a standout in the exhibition.

Miami artist Adler Guerrier revisits Minimalism in Untitled (blck longevity has its place, Be Free)/Lever and other, similar works in which a carefully placed rod holds signage in a corner of the gallery. Referencing Richard Serra’s Equal (Corner Prop Piece), Guerrier suggests the fragile but powerful presence of Black activism in contemporary America. Hung against an azure wall, Stacy Lynn Waddell’s gold leaf works deliver stark, potent messages in near-Byzantine austerity. Waddell seems to point out the war on drugs as a tool of oppression tied to contemporary racial inequality and violence against Black men.

Immediately adjacent to Waddell’s installation — perhaps a little too close — Cosmo Whyte’s Promis(ed) Land (Version #3) connects history to the present. It consists of a painted backdrop showing a palm-studded beach and a small, old-timey cart from which speakers project a hummed version of “Movin’ on Up,” the theme from the The Jeffersons. Whyte also references Marcus Garvey and the Black Star Line, a Black-owned and operated business of the 1910s and 1920s that connected Africa, the United States, and the Caribbean. Whyte’s work is nuanced: the song implies upward mobility in the African-American community and its complexities, but a painted backdrop bespeaks spuriousness. That is, the promised land remains more construct than reality.

Whyte reminds us that the Caribbean and Africa are part of the South’s history — especially that of the colonial era. Born in Jamaica, the Atlanta-based artist is one of four artists in the ATLBNL from the Caribbean (two are from Haiti, two are from Jamaica). This inclusion suggests an expanded vision of the American South that incorporates its long-standing relationship to the Global South. Yet, despite this achievement, the South’s particular engagement with race is generally downplayed in the ATLBNL. No doubt this is a national concern, but given that this is a regional biennial, it seems that the issue of race in the contemporary South should have been more directly addressed.

As a regional biennial, the task of the ATLBNL is massive and its mission vital. While the focus on multimedia practice is welcome, the space sometimes feels crowded. Expanding into other venues — maybe one for each curator — may have helped. To me, video installations, sound works, and large sculptures exemplify inclusive spirit of the ATLBNL and Atlanta Contemporary’s recent rebranding as fun and approachable. However, these kinds of works take a lot of space to function, and as I’ve mentioned throughout, a catalogue or substantive wall text would have provided necessary context and increased their accessibility. Overall, the ATLBNL is an ambitious but problematic exhibition, but its presence is optimistic. I can’t wait to see what happens in the next two years.