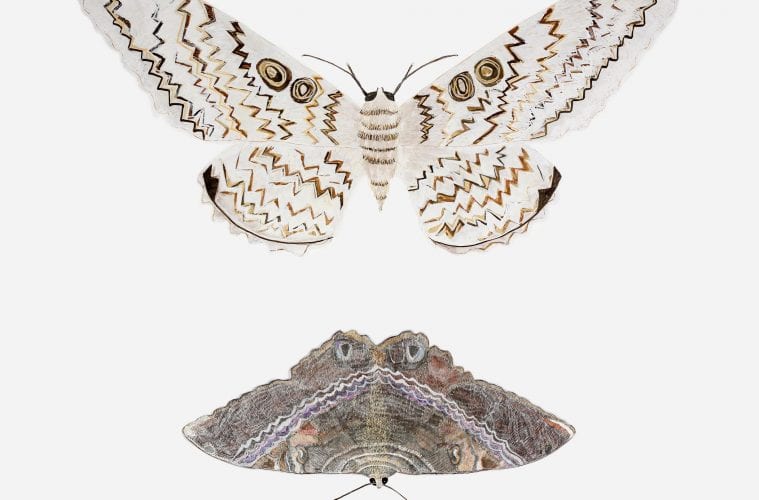 Review: “Nocturne” at Whitespace proves to be a lyrical exploration of mortality and immortality

This article was brought to you in partnership with artcloud. Artcloud is a personalized tool for curating an art collection – whether you are an artist, gallery, or collector. With this social network and built-in marketplace, you can browse thousands of artworks by price, keywords, color, and more through the artcloud app.

One of the dominant themes of Wendy Given and Ryan Pierce’s two-person show Nocturne, at Whitespace through May 7, is aptly evoked in a poetic text by Given that appears on one of her artworks: “Regain the lost…bonds…with the stars, plants, minerals, animals and all of nature. These are the truest of ancients and hold innate unspoken cues of understanding.”

Inscribed on the shaft of a gold-bladed scythe mounted on the wall, Given’s words place this simultaneous symbol of death and fruitful harvest within a context of re-engagement with humanity’s oldest intuitions. Similar themes of mortality and immortality haunt this darkly lyrical exhibition, both re-evoked and reversed reverently and/or irreverently to suit the circumstances of a time in which nature and the symbols it suggests have been altered by a fast-changing physical and spiritual climate. Given, a one-time Atlanta resident now living in Portland, Oregon, has exhibited her work alongside Portland artist Ryan Pierce’s in a previous exhibition that made clear how well their independently conceived artistic projects mesh. In this show, it is occasionally difficult to be sure which artist created certain works, even though their primary styles are immediately recognizable.

In general, Given’s lyricism is less ironic than Pierce’s, but is frequently unnerving nonetheless. As the appropriated scythe might indicate, growth and decay and the resulting folkloric offshoots are often on Given’s mind. A Death’s Head Beetle is displayed in a French pocket-watch case,  as though it were the relic of some barely imaginable saint. Jewel-toned beetles swarm over bunches of grapes in an adjacent color photograph. Actual taxidermied beetles crawl between matching clay sculptures of an outstretched white snake holding a feather in its mouth and a lustrously black snake coiled protectively around gold-covered porcelain teeth. These creatures are the attendants of a small “Wild Woman” figure composed, memorably, of wood, feathers, pussy willows, glass, bone, rabbit fur and crystal.

The sense of mythic archetypes run pleasurably amuck is extended by the presence of a taxidermied white peacock, its tail composed of fronds and other plant matter, with a small white mouse clinging attractively to its neck. This atmosphere of mysteries lost and recovered extends outward to the cosmos in “Starshine,” an eight-sided floor sculpture of mirrored triangles that alludes to the dispersion of starlight. It extends inward in a triptych of photographs in which two nightscapes featuring the light reflected from the retinas of animals flank a similarly dark central photograph of the tree-branch-like blood vessels of Given’s own retina.

Given’s lushly excessive and playfully uncanny body of work is complemented by Pierce’s sculpture and paintings, which represent nature overwhelming culture’s ruins  after a climate-change apocalypse. “Terminal Degree” depicts a raven using a stick to create a drawing on the cracked glass of an empty picture frame that is half-obscured by the sprawling black hollyhocks that are the subject of the corvid’s artwork. The mysteriously titled “Mask for Night Farming” portrays the foliage of a sweet potato vine overrunning the fragments of a broken piece of ceramicware decorated with the representation of a snake not unlike the clay serpents that coil throughout Given’s segment of the exhibition. “Invasives #5” is one of a series of hollow stoneware conquistador portrait heads that Pierce inverts for use as a vase for floral arrangements that decay over the course of an exhibition. It is a witty collision of nature and history in which both opponents appear to be the losers, just as the plants and animals in the paintings appear to have triumphed only uncertainly and uncomfortably over human artifacts in a habitat that no longer forms much of a home.

Given, on the other hand, remains hopeful in the midst of her often macabre symbols set amid surrounding darkness. “Paradis,” a large mixed media painting on paper, is the most multilayered emblem of this: a richly colored representation of an anatomical photograph’s cross section of a human torso, the strangely abstract shape is displayed against a solidly black background in a manner that suggests that the human body is itself a paradise, an English word derived from the Persian for “enclosed garden.” In Given’s symbolic universe, and to some extent in Pierce’s, the insistent materiality of nature opens out ultimately into mysticism.