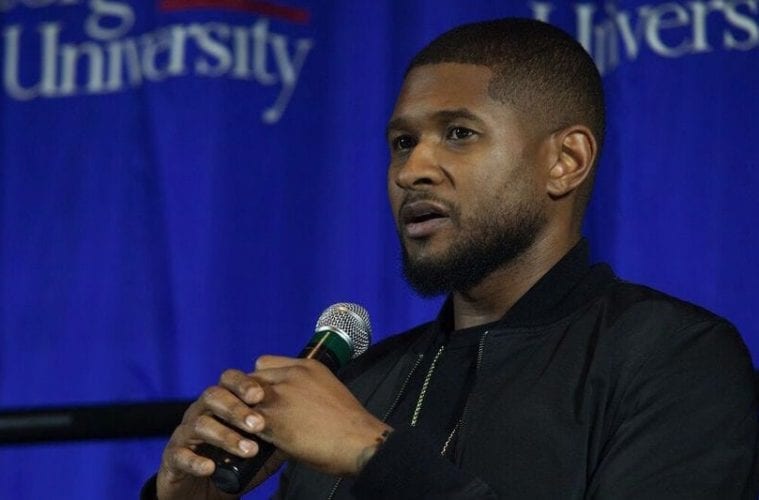 According to his publicist, Usher isn’t doing interviews right now. Yet the afternoon of April 12, he visited Georgia State University to speak to students for an hour. Save for a gold chain, his all-black outfit of jeans, a t-shirt and bomber jacket was utilitarian. Those who follow him on Twitter knew that he meant business: “You know something is about to go down when I’m wearing all black every day.”

The reason why he answered student-submitted questions wasn’t his upcoming eighth album. Instead, 20-odd years into his career, Usher is beginning to publicly address social injustice as a budding activist. “I’m happy to have the opportunity to share my vision outside of what you guys know and recognize me for,” he said.

The packed auditorium knew Usher for his Michael Jackson-informed ambitions and delectable sex appeal. (Two days later he performed at Justin Bieber’s concert in Philips Arena.). Only Adele’s 25 has sold close to what Confessions tallied in 2004, with 7.98 million copies. So Usher surprised everyone last fall with the release of  “Chains,” featuring Nas and Bibi Bourelly. For this urgent song, he released not one but two videos. One showed recent victims of racial profiling and police brutality, from Trayvon Martin to Eric Garner and Michael Brown. The video uses facial recognition technology so that, if you look away, the music stops. The other imagined himself in their position, before he witnesses his own funeral, though Usher is famous enough to where that scenario seems unlikely.

If there was one reason to see him speak on a weekday afternoon, it was to answer one question: Why?

The first reason Usher gave was simple: He couldn’t ignore the headlines. After all, he still listens to the radio when he drops off his two sons at school. (Stars—they’re just like us!) “Chains” is intended to be a conversation-starter, one that Usher has used his household-name status to leverage.In fact, for the majority of this GSU talk, he spoke as a facilitator, not someone in the trenches. He urged this majority-black crowd to learn its history—why society sees them as threats. He instructed students to not demonize every cop they see, just as he is with his own kids. He also used his inside voice to encourage people to speak out even on social media.

“I really do hope that you guys understand [that] utilizing your voice is more powerful than anything you will ever do in your life,” he said.

Usher tried his best to speak to  these students as a diplomatic mentor. Some answers were open-ended, as if he wanted them to draw their own conclusions. (He might have also gleaned from decades of media training not to get too political.) Fortunately, one by one, students kept asking Usher to take a stance. He weighed in on the use of dashboard cameras in police cars, whether African-American history should be better taught in schools. One student asked how he felt about Beyonce’s “Formation,” after critics said that its video and Super Bowl performance was anti-police. He paused. Maybe he was searching for words at first. But when he showed everyone his sheepish grimace, the crowd laughed. With one look he went from sounding serious to being like, “C’mon, are you serious?”

“I think that ridicule comes with reality,” he said. “If you say something and make someone uncomfortable, they may find a way to discredit your purpose. [Being anti-police] wasn’t the point. Let’s not distort the issue or distort the reality with what has happened with our country.”

As a pop superstar, Usher has set a golden standard. He sings about heartbreak with as much finesse as he shows with his fancy footwork. But as a protest singer, he is militant, chanting “We still in chains” in protest. This shift hasn’t gotten him boycotted by police unions, like Beyonce with “Formation.” But the GSU crowd may also be the most interested in what Usher has to say about the state of the union. His “Chains” videos have 3.7 million YouTube views between them both. The video for Pitbull collaboration “DJ Got Us Fallin’ In Love” has 56 times as many. His remarks at Georgia State gave away how he isn’t used to not being heard. When asked whether the music industry looks down on songs like “Chains,” he said, “I don’t know. I wish they were celebrating them more.”

Usher released “Chains” on TIDAL, which is co-owned by stars like Jay Z, Madonna and Alicia Keys. At a press conference last March, 17 artists total helped introduce the streaming service. Of those 17, only Beyonce and J. Cole have made pointed artistic statements about the same issues discussed at GSU.

“I still can’t believe he is actually here,” a student whispered during the April 12 talk. She was starstruck. Not even Usher could ignore the gunshots outside his club confines.