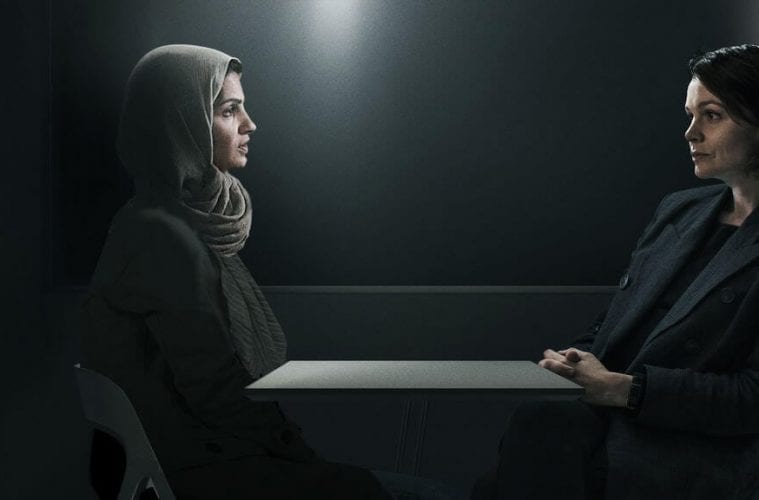 The explosion of original series and movies on streaming platforms is resulting in more meaty, flawed roles for women than ever before. Let me start with the favorite of the ones I’ve watched recently on Netflix.

Paced like a thriller, complicated but not overwhelming, Collateral follows Kip and her partner Nathan (Nathaniel Martello-White) as they investigate the seemingly random killing of a pizza delivery man after he drops off a pie at the home of the ex-wife of a member of Parliament, Karen Mars (Piper). Karen is a bit of a boozy nightmare, and the murder investigation gets complicated when the inspectors learn that the murdered man was delivering drugs as well as pizzas to his customers. Also, he was undocumented, presumably a refugee from Syria.

The plot entangles the MP, Mars (John Simm); Mars’s old friend Jane (Walker), a lesbian minister harboring a young Vietnamese girlfriend whose visa has expired; the guilt-stricken manager of the pizza restaurant, Laurie (Squires, memorable in the Ken Loach film I, Daniel Blake); and a military sniper as tightly wound as the bun on her head (Spark). I’ll let you discover how they’re all connected with the central mystery. Collateral isn’t perfect and has some uneven bits, but it never wastes your time. 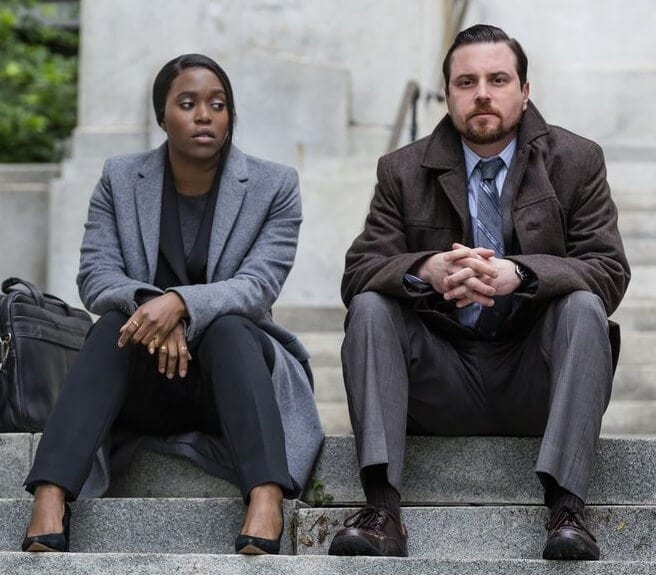 I also liked much of what I saw of the American series Seven Seconds. Created by Veena Sud, producer of the Stateside version of the Danish series The Killing, it also provides a couple of good roles for women.

Regina King plays Latrice, a New Jersey mother whose teenage son is killed by a hit-and-run driver, and Clare Hope-Ashitey is KJ, the attorney assigned to prosecute the culprit. Unfortunately, a band of crooked cops in the local vice squad have framed an innocent homeless man for the crime, because the real killer is a rookie member of their team. Also complicating things? KJ is an alcoholic mess who would get along well with Piper’s character in Collateral.

The setup is fine, and the potential for the show to explore some of the fault-lines that run through racial and social divisions is promising. To be honest, though, despite the kind of blunt language you don’t hear on network shows, Seven Seconds began to feel like formulaic TV to me, especially given the extreme, two-dimensional villainy of the chief of the vice squad (played with zero nuance by David Lyons). I may go back to the show someday, but it didn’t get its hooks in me the way I’d wanted.

The nine-episode Belgian mystery Tabula Rasa also offers a fascinating role for a strong actress. Here it’s Veerle Baetens, who was heart-wrenchingly good a few years ago in the film The Broken Circle Breakdown. Here, the bizarre twists of the narrative sometimes defeat her.

Think of it as a female elaboration of Memento, and you won’t be far off. The actress plays Annemie, a singer whose career was ended by a car accident, which sent her into the limbo of short-term amnesia. She forgets things soon after she experiences them, so she has to leave herself clues via notes or drawings in her journal. Formerly living in an isolated country house with kindly husband Benoit (Stijn Van Opstal) and their young daughter Romy, at the start of the drama she’s temporarily being held in a mental hospital, where she’s interrogated by a detective. It seems that Annemie was the last person seen with a man named Thomas (Jeroen Perceval), who has disappeared. So she’s the prime suspect in what is either his abduction or his murder — only, she can’t really remember much, including the man himself. 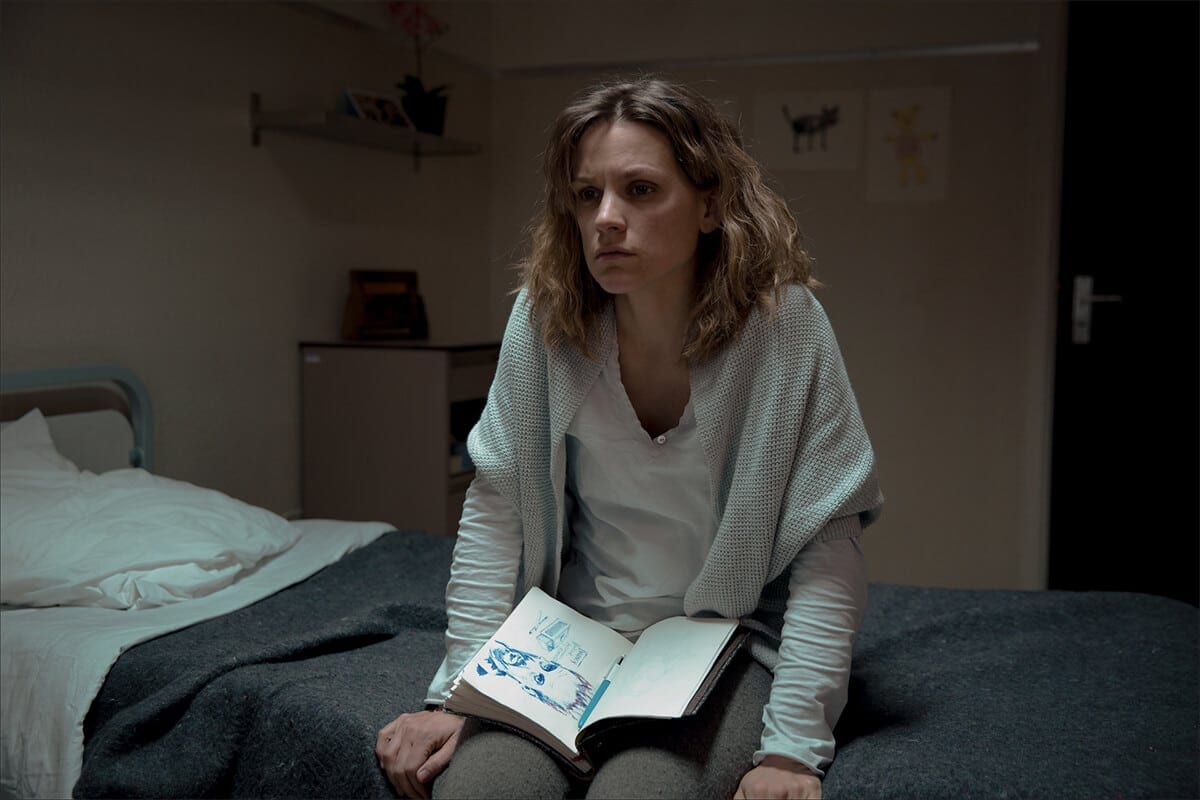 The series toggles back and forth between the hospital now and the events of the three months preceding Thomas’ vanishing. Like the series I’ll write about next, Tabula Rasa embroiders its already high-concept plot with hints of supernatural forces bedeviling the family and their big, spooky house. Sometimes this works, sometimes it feels like exactly what it is — atmospheric diversion.

A big revelation in the fifth episode upends the show, not in a good way. For me, it was a too-extreme bit of a rug-pulling. But wait, there’s more: The solution of the mystery is bonkers, rocketing past improbable to no-effing-way. So while you might take some delight with its extreme plot contortions, approach with caution.

As passionate as she is in scenes with her instrument, with anyone else onscreen, Wilson is a blank. She is mainly distinguished by a too-hip, silver-blonde haircut and an inability to make us care for her increasingly unhinged character. Stealing bits from other films (notably The Wicker Man), the plot sends Matilda, following the gruesome suicide of her mom, to a village in Wales, where Mum apparently had some unspoken connection to the disappearance of a local girl some 20 years ago. Lights flicker, mirrors are ritualistically smashed, Matilda sleeps with the cowardly heir of the local manor house while cold-shouldering her pianist colleague (the engaging Joel Fry), who has a massive crush on her. Everything ends with demon possession, but you won’t understand why or care much. On the plus side, the show gives actress Tara Fitzgerald a chance to vamp around, delivering ominous pronouncements. There are worse things. 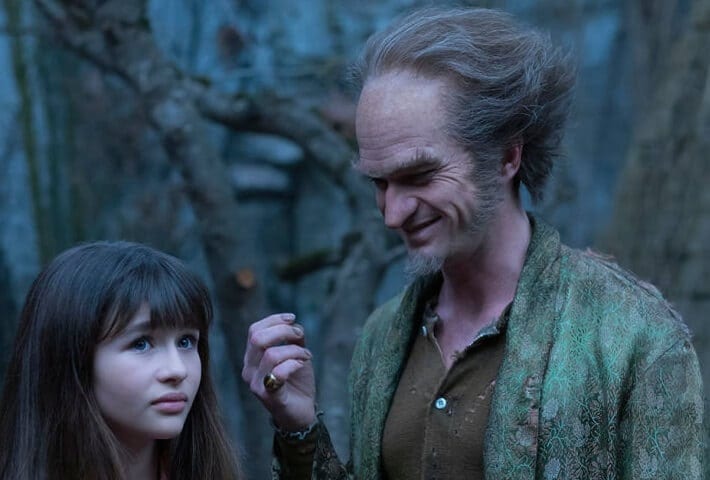 Count Olaf returns for a second season of A Series of Unfortunate Events.

Speaking of worse things — in a good way — the second season of A Series of Unfortunate Events is out. Neil Patrick Harris returns as the nefarious Count Olaf, as well as the young actors who played ill-fated Violet and Klaus Baudelaire the first time around, plus deadpan Patrick Warburton as our narrator, Lemony Snicket. I’ve only watched the first of the 10 episodes, but this season is composed with the same loving attention as the first. To be honest, Series is so visually over-determined and whimsical, I can only take it in short doses. Watching it can feel a bit like eating too much candy.

Over on Amazon, there’s an original series based on the book of the same name, the six-episode The Dangerous Book for Boys. It’s a domestic fantasy that focuses on three sons of a man who recently died but left them a handmade atlas full of tips and instructions for how to navigate the lives ahead of them — how to play poker, talk to girls, fly to the moon, etc.

The show is sweet, aimed for a younger crowd, and perfectly inoffensive. I made it through a handful of episodes, which seemed to get better as they went along. Chris Diamantopoulos plays the dual role of their late dad and his irresponsible, living twin, who moves in with the grieving family. And the great Swoosie Kurtz is onboard, though she can’t really do much with her role as the boys’ generic, rock ‘n’ roll-loving grandma. (The dialogue and jokes tend to feel a little on the second-hand side.)

It’s not new on Amazon — in fact, it’s already three short seasons along — but I recommend Catastrophe. Brit Sharon Horgan and American Rob Delaney hook up in London while he’s there on business, then discover that Sharon is pregnant. Tempting fate, they decide to make a go of it and get married. The comedy follows them over the course of several kids and multiple challenges. Those include Rob’s alcoholism (he’s in recovery but sometimes hanging on by his fingernails) and the sort of realistic, petty fights you don’t often get to see in comedies about relationships. The fourth season is on its way, though no release date is announced yet. Sadly, it has to continue without Carrie Fisher, who played Rob’s acerbic mom and was flying home from shooting season three in London when she suffered her fatal seizure. 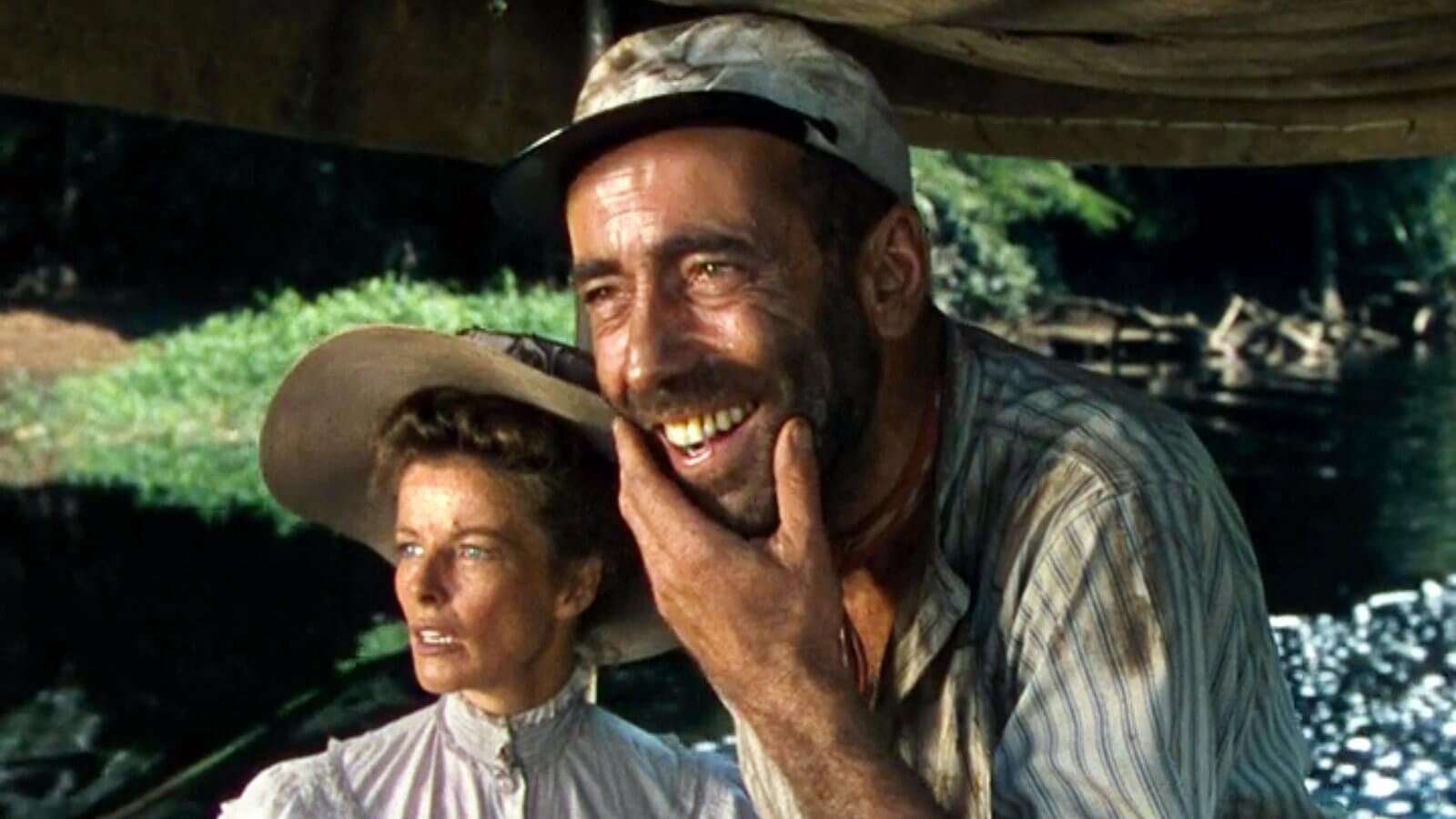 Katherin Hepburn and Humphrey Bogart in the classic The African Queen.

Another London-based, very edgy comedy I like a lot is Fleabag, based on its star’s original one-woman show. Over six half-hour episodes, Phoebe Waller-Bridge plays the titular character (we never know her real name). Fleabag is an oversexed, hard-drinking  mess trying to navigate her way through life in the wake of her best friend and business partner’s death. She goes to bed with all the wrong men, and comments on her disastrous choices while they’re happening. (Waller-Bridge is a master of the onscreen, direct-address). Very rude and very funny, Fleabag winds up at an unexpectedly moving place by the end. It’s abetted by the glorious Olivia Colman as the heroine’s witheringly passive-aggressive godmother.

Also on Amazon, fans of Brit mysteries should check out the movie Crooked House, adapted from an Agatha Christie book with one of her most surprising resolutions. Max Irons (son of Jeremy) plays a detective hired by an old flame to come to her family’s country home, where her grandfather has died and she suspects murder. The obvious suspects include just about all the extended family members living unhappily together in the same house, played by Glenn Close, Julian Sands, Christina Hendricks and Gillian Anderson. It’s not great, but it’s a fun, old-fashioned mystery.

If you’re in the mood for other mysteries or spooky flicks streaming on Amazon, consider the Puritan-era, incredibly atmospheric shocker The Witch, a Sundance hit from 2015, or Michael Mann’s Manhunter from 1976 (the first screen version of Red Dragon, featuring the film debut of Hannibal Lecter, with the High Museum of Art standing in for his prison). Or if you’re primed for one of the great screwball comedies, watch Cary Grant and Rosalind Russell as romantic exes and rival journalists in the 1940s His Girl Friday, a movie famous for the machine-gun-fire velocity of its dialogue.

If you’re still in the mood for old classics, try a Netflix double bill of Sunset Boulevard and The African Queen. I also recommend the 2016 Brazilian film Aquarius, starring Sonia Braga as an aging free spirit who refuses to leave the seaside apartment developers want to tear down. Those with a strong stomach and love of kinetic, violent scenes might check out Oldboy (the 2003, Chan-wook Park original, not Spike Lee’s remake). A strong stomach is also required for On Body and Soul (parts of it take place in an abattoir), but this Oscar-nominated film from Hungary is an interesting fable about two unlikely soul mates who (literally) meet in each other’s dreams. Or for another offbeat modern comedy, consider Tangerine, the tale of transgender sex workers in Santa Monica, made by director Sean Baker before his recently acclaimed The Florida Project.

Oh, and if your knowledge of 1970s American classics has a shameful gap as big as this, please note that The Godfather and The Godfather: Part II are on Netflix. It’s easy these days to waste a lot of valuable time streaming so-so or outright bad stuff (see Requiem, above). But trust Francis Ford Coppola’s movies are a fantastic six-hour investment. Just don’t ruin the experience by watching The Godfather: Part III.