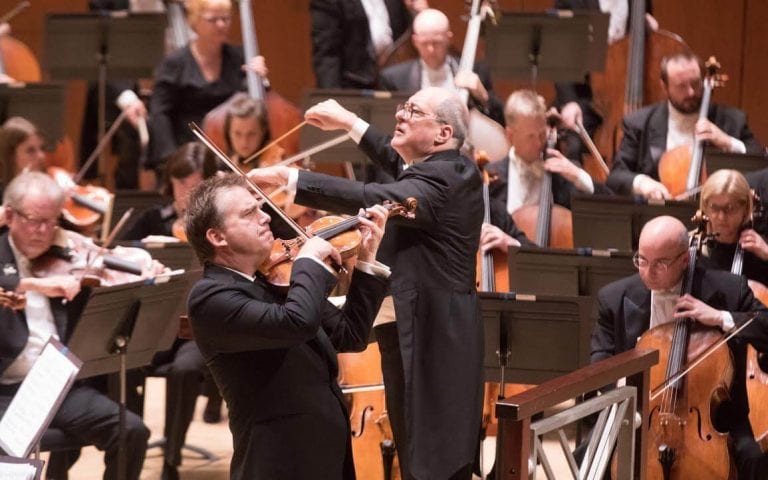 Under Robert Spano, the ASO expertly performs Bernstein and Beethoven

On Thursday evening at Symphony Hall, the Atlanta Symphony Orchestra performed a concert of music by Kurth, Bernstein and Beethoven, led by music director Robert Spano, with violinist Robert McDuffie as guest soloist. The program will be repeated tonight (Friday) at Symphony Hall, before the orchestra travels to Savannah to perform the Bernstein and Beethoven selections Saturday at the Lucas Theatre for the Arts as part of the Savannah Music Festival.

The concert opened with the four-minute orchestral fanfare “May Cause Dizziness” by ASO bassist Michael Kurth. Written in 2010 in celebration of Spano’s 10th season as music director, it was also Kurth’s first piece for large orchestra, and the first of several commissions for the orchestra that will be recorded this May for release on ASO media next year. Rather than start loud, the piece begins with a few instruments and builds on its persistent groove, developing its fanfare-like character over its short celebratory span. The title was inspired by a warning Kurth saw on a bottle of prescription medicine, accompanied by a cartoonish image of a half-closed eye with spirals above it.

Leonard Bernstein’s “Serenade, after Plato: Symposium” for violin and orchestra was less abstractly inspired by a fourth-century BC philosophical text that depicts a set of impromptu speeches delivered by illustrious men at a banquet in praise of Eros, god of love and desire. The speeches came after the customary drinking that accompanied such events, of course, when a speaker might be more inclined to be frank in their speaking than without having imbibed adult beverages.

Bernstein portrays the notable orations in five movements: Athenian aristocrat Phaedrus and Pausanias, lover of the poet Agathon; comic playwright Aristophanes; Eryximachus, a prominent Athenian physician; Agathon; and the philosopher Socrates, who is interrupted by Alcibiades the Younger, famed for both his physical attractiveness and excessive vanity, and his drunken followers, turning the end of the work into a Bacchanalian party.

After intermission came Ludwig van Beethoven’s celebrated Symphony No. 3 (“Eroica”). Spano and the orchestra gave its opening movement a bold, secure and emotionally forthright performance. The second movement, a funeral march, began in the shadows, slowly growing and becoming more present as it developed, as if the procession were coming nearer. It reached a stormy development then receded to the distance as it ended.

The energetic scherzo that followed brightened the emotional flavor, playing games with the perception of meter while giving the French horns the featured role in its middle section. The set of variations that comprised the work’s finale was joyful in a predominantly dance-like character, and Spano and the orchestra brought it home at the end in the coda’s extended flurry of forceful tonic chords.

In between the Kurth and Bernstein works, Spano presented the ASO Talent Development Program’s 2018 Aspire Award to the Jacksonville-based Ritz Chamber Players, with its clarinetist and artistic director Terrance Patterson accepting the award on behalf of the group. The program identifies and develops gifted and motivated classical musicians of African American and Latino heritage, and the Aspire Award is given to those who have demonstrated both high-level musical excellence and serve as role models for the program’s fellows.

They opened with the eight-minute 2006 “Trio” for violin, cello and piano by Jonathan Bailey Holland, an amiable, attractive piece performed by Edwards, Whittington and Wilson. Although its three movements combined are relatively short for the genre, it proved itself a work that can easily find its way into the repertoire of most piano trios, once discovered by them. The Ritz Chamber Players commissioned and premiered the work, and their performances, like this one, will hopefully make that wider awareness more likely.

Buchanan and Wilson then performed Margaret Bonds’ “Three Dream Portraits on Poems of Langston Hughes.” Bonds, one of the first African American classical composers to gain wide public recognition, was best known for her frequent collaborations with Hughes. Edwards, Whittington and Wilson concluded the chamber concert with Beethoven’s Piano Trio No. 5, Op. 70, No. 1, familiarly known as the “Ghost” Trio, in a direct nod to the Beethoven Symphony on the orchestral program to follow.