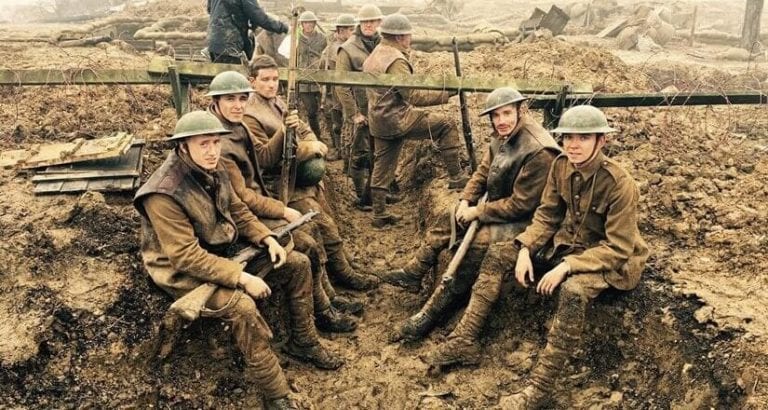 Journey's End is set in the trenches of World War I.

In the last few years, the theme of communal guilt in the wake of the Holocaust has become a common thread in some European films. The best of these that I’ve seen is the Oscar-winning, black-and-white stunner, Ida, an exploration of the complicity of Poland’s common folk (aka Christians) in the elimination of their Jewish neighbors during the war.

The new film 1945 is set in Hungary, is also shot in black-and-white and has a premise similar to Ida’s. I wish I could tell you that it shared that film’s visual and emotional power. It’s a decent movie, but a little too obvious in its storytelling.

Set on the same August day that the second American atom bomb falls on Japan, the drama focuses on István (Péter Rudolf), the town clerk of a Hungarian village. He’s busy this morning with the final arrangements of his son Árpád’s (Bence Tasnádi) wedding to Kisrózsi (Dóra Sztarenki), whose beauty compensates for her position several social rungs below István’s family’s.

The pre-wedding, anticipatory bustle throughout the town soon changes to dread as an old man and young man, Jewish and dressed in black, arrive from the train station bearing crates the size of coffins, which they say are full of perfume and cosmetics. Their presence quickly evokes a particular absence of any other Jews in the town.

Fearing the newcomers’ agenda, the townsfolk enter into a kind of hushed pandemonium. They begin hiding silverware, rugs and other valuables in houses that we come to realize were “appropriated” from the former Jewish owners — who were herded, with the locals’ complicity, into concentration camps.

Strangely, the movie, in form and rhythm, takes on the feeling of a comedy. But 1945 is very self-consciously serious, so there’s a weird tension at play. Nicely acted and economically paced, the movie’s payoff is not as promising as the buildup leads you to expect. It’s a fine addition to post-war films, just not one of the great ones.

Focusing on the previous world war (and opening on April 13), Journey’s End has often been revived onstage, and was filmed previously in multiple forms. (It was the Hollywood calling card for Brit director James Whale, better known as the auteur of the first two Frankenstein movies.) In addition to its timeless anti-war message, there’s a reason for the material’s longevity. It’s like a handsomely constructed, old-fashioned item of furniture, the sort of well-crafted drama that’s fallen out of favor but still captures your admiration.

It’s spring of 1918, the fourth year of World War I, and much of the action takes place in a muddy trench in northern France, where British troops have been stuck in a long-running stalemate with their German foes. Rumor has it, though, that the Huns are planning an attack any day now to gain a bloody advantage.

Into this nervy no-man’s-land (both literal and emotional) comes Second Lieutenant Raleigh (Asa Butterfield), a very excited fellow who looks all of 14. His beamish enthusiasm lets us guess pretty quickly where his fate is aimed. Any sense of familiarity you feel while watching Journey’s End probably comes from the influence R.C. Sherriff’s 1928 play had on subsequent condemnations of WWI, including Stanley Kubrick’s Paths of Glory (1957) and Peter Weir’s Gallipoli (1981), both still extremely powerful films.

The eager Raleigh has asked to join this infantry company specifically because its commander, Captain Stanhope, was proctor at his school back in England. (There’s bromance in the gun-powdery air.) But as the veteran Lieutenant Osborne (Paul Bettany) warns Raleigh, “You’ll find him changed, I suspect.” That’s an understatement. When we meet Stanhope (Sam Claflin), it’s obvious that the older man can’t function without a glass of whiskey clasped in his trembling hand.

You can’t call him a victim of PTSD, because he’s living in the trauma and hasn’t reached the “post” side of it. But Stanhope’s shattered nerves lead to one of the movie’s nicest scenes. He calms the panic of a fellow shell-shocked subordinate (Tom Sturridge) by confessing that he — and all their fellow soldiers — are just as terrified.

That’s understandable. The trenches are a ghastly place to be, and, worse, the movie shows us that the lives or deaths of these soldiers depend on the whims of superior officers, who will happily send their troops to slaughter just so long as the carnage is completed before their dinnertime.

Director Saul Dibb does a nice job with his actors. When his film leaves the claustrophobia of the trenches, though — especially in a climactic battle scene — he doesn’t seem to know how to shoot action in coherent visual fashion. Luckily, most of the film is talky, and his actors are all good.

The MVP is Bettany, world-weary but stoic in that stiff-upper-lip fashion that can slide across the line from priggish to moving. In the recent drama Film Stars Don’t Die in Liverpool, Annette Bening, as actress Gloria Grahame, recalls great advice she got from Humphrey Bogart: Stay in the shadows, let the camera come to you. Bettany’s approach here is the same. It’s a shame he’s probably best known to US audiences as that annoying android, Vision, in the Avengers flicks. He deserves better.