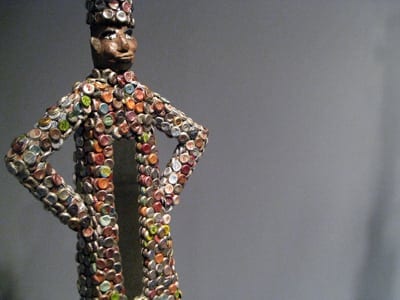 The art career of the ex-Chicago vernacular artist known as Mr. Imagination has risen from the ashes of his catastrophic 2008 fire like the phoenix whose symbolism attracted him to Atlanta. Though longtime friend Lake Sirmon had been urging his transfer from Bethlehem, Pennsylvania, for some time, it was the symbolic promise of resurrection that led him to make the move and begin anew, with shows in Europe on the horizon.

Before heading off to Venice to create a site-specific installation for a group show sponsored by Benetton, Mr. Imagination has debuted new work and work that came through the fire in his first post-move Atlanta exhibition, at Barbara Archer Gallery through April 9.

“Mr. Imagination’s Throne #5” is there in full-scale flamboyance, available on opening night for pictures with the artist. So are a full range of post-fire works featuring Mr. Imagination’s signature flattened bottle caps. A work combining burnt and post-fire caps is titled “Phoenix.” “Rising From the Ashes” is a wall piece in the shape of a Yoruba divination tray. “Sun God” is a sculpted face that is just what the title says. A spectacularly framed mirror titled “Reflection” was his first work made in Atlanta.

Bright with optimism and vision, these pieces lack the poignancy that only brands snatched from the burning can possess. The various works titled “From the Ashes,” which include three hauntingly blackened staffs from an early phase of his career, are charred or scorched objects that many viewers cherish.

Mr. Imagination’s  overall vision has always been future-oriented, moving from one medium to another as his spirit guides him. But the accidental insertion into history through fire has, if anything, enriched his art — which was born originally from the different tragedy of near-death from a gunshot wound.