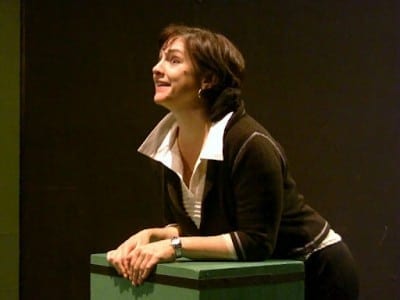 When the folks at PushPush Theater approached Synchronicity Theatre about remounting 101 Humiliating Stories in Synchronicity’s cozy confines at 7 Stages, Synchronicity artistic director Rachel May said, Why not? Synchronicity is now mounting the world premiere of Lauren Gunderson’s Exit, Pursued by a Bear and the Michael Friedman-Melanie Marnich musical The Brand New Kid, May noted to the opening-night audience. What’s another coproduction between friends?

Considering playwright Lisa Kron’s neurosis-ridden and ridiculous material and actress Shelby Hofer’s engaging performance, there’s no fear that this one-woman show will get lost in the shuffle. 101 Humiliating Stories runs through March 23. 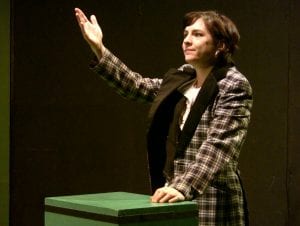 Kron’s play is structured around the anxiety that comes with being invited, for no apparent reason, to perform her show at her high school reunion in her home town of Lansing, Michigan. She lets the audience know right away that this will not be a triumphant return in any way; Lansing holds very few cherished memories. Even worse, the rest of Kron’s pursuit of a life in the theater has brought her no further than with a lesbian troupe doing Off-Off-Broadway productions. In fact, her life has been, well, a series of crushing humiliations, and with every imagination of the reunion speech, she fears that her return to Lansing will provide humiliation No. 101.

Actually, she concedes to the audience, there are really only about 17. She spends the evening flip-flopping among those stories and interacting with, and sometimes outright ignoring, the audience. Sometimes she’s worried that the material will be too heavy for the crowd. “Is everyone all right?” she checks in, eliciting laughter. Her cell phone goes off, and she has to entrust it to a willing audience member to remove all temptation of taking another call.

It’s a brilliant conceit, but a difficult one to pull off over the course of the 70-minute performance. Directed by Lawrence Keller, Hofer is supremely comfortable in this mode, drawing out extended laughs with a frown or interrupting her own stories with her persistent self-doubt. Rarely is an actress so at ease in being ill at ease.

Regrets? She’s had a few. There’s the mortifying fashion sense of wearing a green polyester tracksuit in junior high, the horrifically unsuccessful attempt to impress actress Sigourney Weaver at a party and strutting around as a temp in a law office with her skirt tucked into her panties. 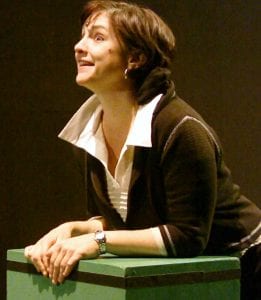 There are plenty of moments that any woman can relate to, most of them relating to the crushing fear of an ugly self-image, most notably revealed in the litmus test of viewing your reflection as you walk by a storefront window. Kron’s results came back negative: “I was like a scoop of mashed potatoes walking down the street,” she groaned. “I wanted to see a cohesive visual image.”

Kron’s life is a never-ending horror show, and Hofer plays the humiliations for laughs with uncommon verve. She comes off like a female David Sedaris, who has made a cottage industry of spreading disdain evenly around — for others as much as for himself. It’s a rare thing to watch a performer draw laughs by falling asleep in the middle of a show, but Hofer can slump with the best of ’em.

Yet at times there was the sense that the otherwise game audience wasn’t always with Hofer, and it’s difficult to pinpoint why. Maybe it’s because the conceit of such a scattered performance is difficult to pull off over an entire show, or maybe it’s that the humiliations don’t necessarily add up to a bigger idea.

But make no mistake: 101 Humiliating Stories is storytelling at its most delightfully neurotic, and worth sifting through the other fun at 7 Stages.