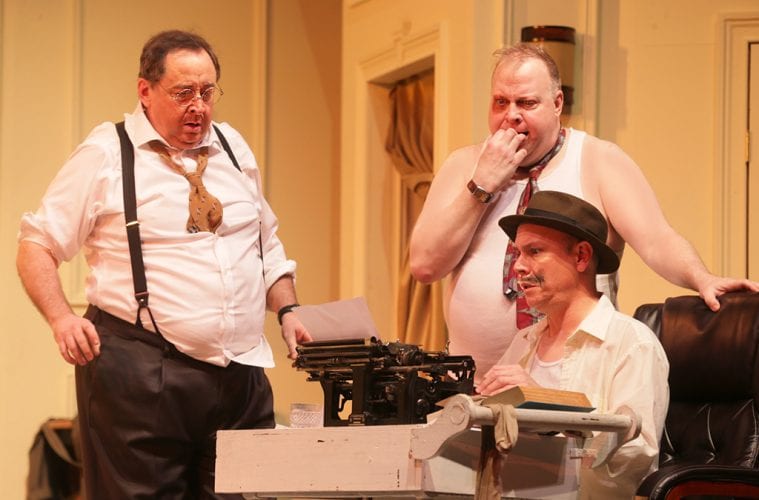 Moonlight & Magnolias tells the unknown story of Gone With the Wind

Margaret Mitchell’s Civil War epic, Gone With the Wind, was published in 1936 and became an international bestseller. It was adapted into a movie in 1939, which garnered eight Academy Awards, including Hattie McDaniel’s win for Best Supporting Actress, which made her the first African American actor to take home an Oscar. However, the movie almost never made it to the big screen. The producer, David O. Selznick, shut down production after 30 days because he was unhappy with the script. He called in hot shot Ben Hecht, who had never read the book, to do a rewrite. Playwright Ron Hutchinson locks Hecht, Selznick, his quick-witted secretary Miss Poppenghul and director Victor Fleming in a room for five days and reimagines how the script was finished in Moonlight & Magnolias, onstage at Georgia Ensemble Theatre through January 27.

James Donadio helms the production, which is brimming over with laughs from start to finish. Locked in a room with nothing but peanuts, bananas and Margaret Mitchell’s text, the men start out reluctant but dedicated to the work. However, as the days go on and constipation sets in, they start to come unwound. Piles of paper and peanut shells cover the floor, their ties are around their heads and their pants are around their ankles. Donadio’s direction really shines in the physical comedy scenes featuring Bart Hansard as Fleming and Googie Uterhardt as Hecht. They are flipping over sofas, sliding on chairs and collapsing on desks. Atlanta favorite William S. Murphey plays Selznick, and the scene where he wraps up in his green and gold curtains to echo Scarlett O’Hara’s green and gold velvet dress is entertaining and absurd. And, Mahalia Jackson as Miss Poppenghul is a showstopper every time she enters the stage with her notebook and pen, which devolves into a notebook and banana in her exhausted delirium. Still, even with a talented ensemble and circus hijinks, there’s something that prevents this production from being completely satisfying. Perhaps it’s because racial tensions in this country are high and there are days when it seems like the Old South could rise again. Maybe it’s because the play is too hokey and doesn’t take the stakes of making Gone With the Wind seriously enough. Or perhaps it’s because finding humor in any derivative work that evokes nostalgia for the antebellum south just seems too distant.

Hutchinson uses Hecht’s character to raise questions about whether the script glorifies the Old South too much. He doubts that the movie will be a hit and doesn’t even want writing credit on the script for fear that it will ruin his career. Is it okay to leave the scene where Scarlett slaps Prissy in the movie? Does it make her come off as unlikable or too violent? Hecht asks Selznick at one point, “Why don’t you make a movie that makes America look its ugly face in the mirror?” To which Selznick replies, “Because no one wants to see that. America wants to see the way it thinks it looks.”

He goes on to say that “people go to the movies to escape their dismal realities,” which is much of the same reason why people go to the theater. And the pushback from the mainstream against art with a message is palpable. Think pieces flooded the internet about depictions of gun violence in Donald Glover’s “This is America” music video. Dana Schutz’s painting of Emmett Till sparked outrage at the Whitney Biennial. Jeremy O. Harris’ Off-Broadway play Slave Play has prompted protests. When tensions are high, people look to art for a release, not accountability. But, the times they are a-changing, and as Hutchinson points out in the script, the people who engage with art in order to escape are our friends and neighbors. They are us. Hutchinson says through Selznick that we have the power to dictate what gets produced and who gets elected into office — and we always get what we vote for.

Even with all of his pondering, no one is held accountable in Moonlight & Magnolias. It toys with issues but doesn’t tackle them, which in many ways is a slight to the original work. It’s good for a laugh, which is perhaps all everyone needs right now, but what are we really laughing at if what we need relief from is ourselves?