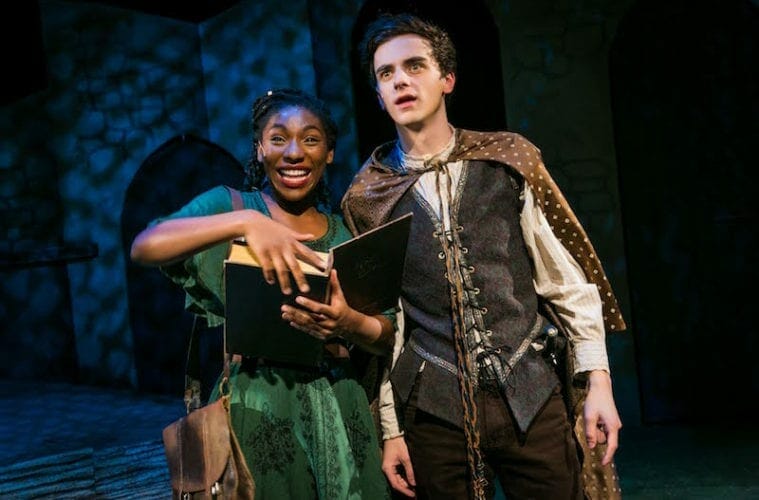 L'Oréal Roaché as Ella and Alex Harding as Prince Char lead a seven-person cast in the family musical "Ella Enchanted," at Synchronicity Theatre through January 5. (All photos by Casey Gardner)

Synchronicity Theatre brings a new Cinderella story to life this holiday season. The musical Ella Enchanted — familiar from the 2004 Anne Hathaway–Minnie Driver film version — contains a beautiful message for theatergoers of all ages. See it through January 5 at Synchronicity’s Midtown home.

Ella Enchanted asks, “What happens when your biggest gift turns out to be your biggest curse?” At birth, Ella’s Fairy Godmother gives her the “gift” of obedience. This makes Ella unable to disobey any order. As she grows, we see this “gift” become the one thing that prevents her from having a normal life. We follow her as she encounters love, evil stepsisters and magical ogres in her quest for freedom. 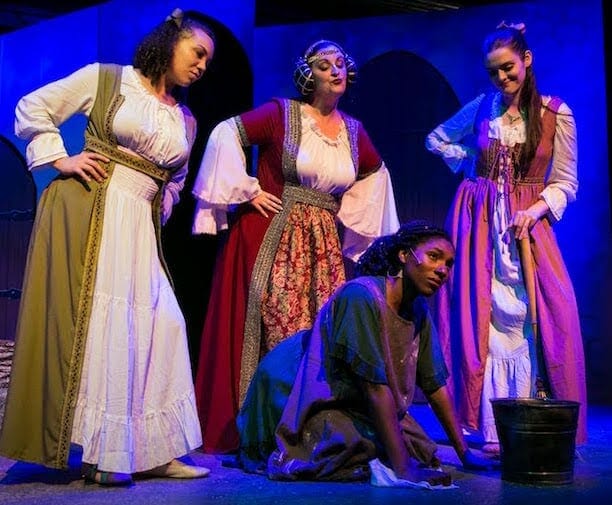 This is a children’s show that’s a must-see for adults as well, with its potent message that Ella find her power within herself. It’s refreshing to see something that doesn’t count on men to make everything all better. Giving young audiences a narrative that doesn’t have a hero saving the day or make marriage the ultimate happily ever after is one of hope. When the shoe-bearing Prince (Alex Harding) finds the elusive Ella, the moment is both funny and profound as he asks, “Why would anyone marry someone because of a shoe?” That line upends the classic tale’s main message and gives this one a contemporary ethos.

The witty, pun-filled script comes from Karen Zacarías (The Book Club Play, Einstein Is a Dummy, Mariela in the Desert, Native Gardens), who’s no stranger to metro audiences. And Synchronicity, which champions diversity, has cast a dark-skinned woman as the central character in a show that does not comment on her appearance.

L’Oréal Roaché as Ella, with set design by Derrick Vanmeter, lighting design by Dakota Adams and costumes by April Andrew

Art, when done right, can change lives, and this piece will be life-changing for so many. It’s rare for little girls and boys of color to see themselves reflected onstage, so this is a big deal. L’Oréal Roaché’s Ella reminds us of the cast of the 1997 TV version of Cinderella, with Whitney Houston as the Fairy Godmother and Brandy Norwood as Cinderella. Roaché has a big voice and an even bigger heart that helps in spinning this story. She’s the only performer in this seven-actor cast who doesn’t play multiple roles.

Atlanta standouts Marcie Millard and Robert Lee Hindsman lead the show’s comedic ship, with Hindsman, it appears, bravely and hilariously channeling Will Ferrell’s cheerleader from Saturday Night Live. You need only see Millard perform once before you fall in love, and her work as the evil stepmother here is no exception.

Ella Enchanted — directed deftly by Jenna Tamisiea, cofounder/artistic director of Glow Lyric Theatre in Greensville, South Carolina — deals with fathers that don’t know how to speak to their children, young and awkward love and, most importantly, Ella’s journey to find power. Let it be your holiday respite for an afternoon or evening.