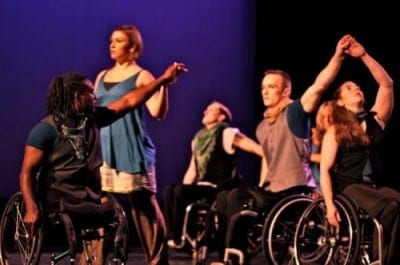 Blake Dalton’s solo that ends CORE Performance Company’s “The Moment Between” summed it up. With resonant voice and resilient motion, he narrated a poem, an artist’s statement on giving his life over to his art. As if throwing himself into a whirlwind, he spun around with breathless speed, legs slicing the air, red dreadlocks trailing behind. “Swallowing, being swallowed … dissolution … floating … emptiness, giving and being given over.…” He finished, lying prone, completely spent.

Such was the spirit felt at the Marcus Jewish Community Center’s Frank Theatre in Dunwoody on Saturday.

Douglas Scott, artistic director of Full Radius Dance, founded the festival 17 years ago to introduce new audiences to a variety of modern and contemporary dance styles, to offer Atlanta-area choreographers a professional performance venue, and to bring area dancers, dance-makers and audiences together.

Out-of-state judges chose most of the works for this year’s festival. Messages were honest and clear. Together, they represented the modern dance scene’s variety and warmth. Performers ranged from children to elders, college students to seasoned pros.

Inside the theater, host company Full Radius Dance opened the formal program with an excerpt from their newest work, “The Path.” Dressed in soft layers of black and teal, some in wheelchairs and some on their feet, the dancers arched back, vulnerable and open, then recuperated into embraces. The lonely sound of wind, Janis Joplin’s bluesy “Summertime” and J.S. Bach’s solemn liturgical music recalled time past, in a meditation about holding on, letting go and accepting a future without one’s beloved.

Fairy tales were the source for Annette Lewis’ “2 in a Pod, 3 in a Tub, 1 Stands Alone,” performed by six young members of Good Moves Consort. Cycles of childhood and the games children play –hand-clapping, swinging, rolling, jeering, teasing and Red Rover — unraveled to George Winston’s flowing piano melodies. These children showed remarkable physical poise and supple technique, engaging with one another delightfully, with clear focus and stage presence.

Sandra Shih Parks’ “Little Broken Steps” explored the centuries-old tradition of Chinese foot-binding, set to a score that overlaid a Philip Glass piano solo with the Chinese aria “The Female Prisoner.” Spotlights defined small spaces on the dimly lit stage. Morgan Carlisle’s slow, tiny, contained steps recalled women’s bound feet. At different times, Cusack and Carlisle shaped a flower with their hands as they bowed, suggesting an ideal of beauty that is subservient and restrictive. Cusack’s explosive kicks and turns, as if bursting with the need for freedom, were ultimately pulled back inside. (Full disclosure: Parks is a dance professor at Kennesaw State University, where I teach.)

Kristyn McGeehan’s duet “In Control,” set to the frenzied music of Pēteris Vasks, explored a mental disorder associated with body issues. Representing that condition, Jena Korvash beckoned to Stephen Loch, physically manipulated and clung to him like a jealous, possessive lover. Both dancers met this work’s gut-wrenching technical demands with emotional power, strength and precision. 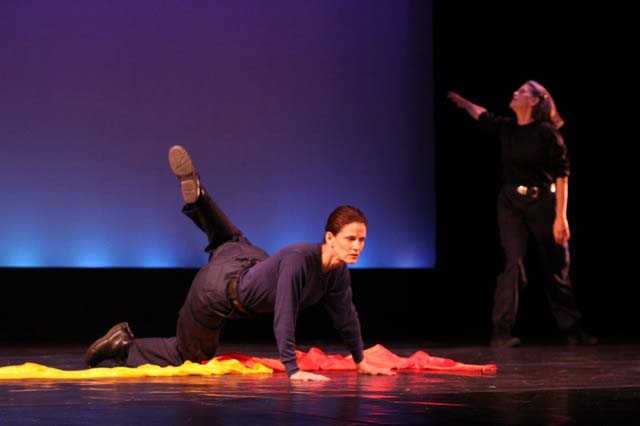 “Blue Steel” (photo above), a duet by Louise Runyon and Lynne Hesse, gave rare personal insights from women who found strength by working in men’s worlds: Hess as a police officer, Runyon as a steelworker. They moved with simplicity, strength and grace to voice recordings of their individual stories — about facing mortal danger every day and about finding balance through feminine things, represented by satiny scarves of gold and red. Both women ultimately removed the scarves, leaving them facing front, with hands on hips open stance, as strong and empowered women.

Finally, CORE’s “The Moment Between” rounded off the evening. Sue Schroeder and Jhon Stronks co-created this piece, they said, to explore “the space between that allows the body and mind to encompass the paradox of emptiness and form.” Huge white rolls of paper hung from the flies, dividing the stage from front to back, creating black gaps of negative space between white columns that blew gently in a breeze.

Each dancer emerged from the vertical spaces between paper columns. Solos brought out unique qualities. Alex Abarca carefully measured and defined the space around him. Claire Molla sensually rolled across the paper. Alisa Mittin had a fascinating, visceral way of extending her limbs in space, then settling into deep knee bends. Corian Ellisor’s mercurial solo traced lines in the negative space all around him. Finally, Dalton, in his heartfelt solo, spoke and danced of the artist’s willingness to lose himself in his art.

Clear among the evening’s works was a sense of commitment. These artists are brave and disciplined. Their messages have depth and meaning, reflecting a respect for human dignity. They’re compassionate and courageous. And they share.