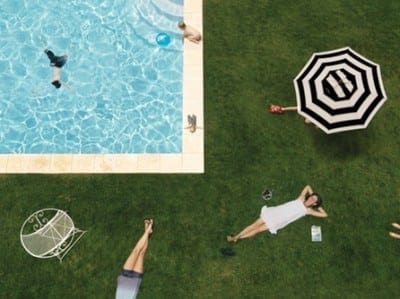 Review: More is more in “Still.Life” at Jennifer Schwartz Gallery

Some artists use form to work out ideas. And some artists get lost in it, clinging like drowning men to their rainbow of colors, technology and mixed-media kit bag. Like Mr. Kurtz gone native in the jungle, such artists couldn’t cut themselves out of the tangle with a machete, even if they tried. And often they don’t want to.

The artists in “Still.Life” — an exhibit at Jennifer Schwartz Gallery through May 28, which explores the connection between photography and painting in the digital age — are knee-deep in form and giddy from the fumes. What Julie Blackmon, Michael Marshall, Aline Smithson and Maggie Taylor have in common is a certainty that more is more. Sometimes they’re right. 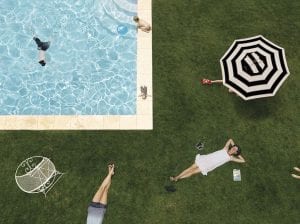 The high point of the show is Julie Blackmon’s pastiches of photographic elements, which are mashed outrageously together through the magic of digital technology so that our eye isn’t sure whom or what to believe (as in “The Power of Now,” above). Revved-up colors give flesh a waxy appearance, flatten space and lend a disorienting painterly quality. The effect can be delightful: in “Power of Now” (2008), a succession of figures — mother, father, babies and children — sprawl out like yard art against a visually intense landscape of neon-green grass and blazing blue swimming pool. It has the look of a jigsaw puzzle image: odd, theatrical, Jeff Wall-meets-“I Spy.”

Blackmon’s pieces work best when they tap into depictions of the chaotic romance and flux of family life, reminiscent of the work of Sally Mann, Loretta Lux and Tierney Gearon. Less successful are the one-note, composed and kitschy distillations of an idea or action. In “Take Off” (2009), for example, a little boy prepares to jump from a chair into a pile of pillows and ends up looking like a 1980s Maxell audio tape ad.

Michael Marshall tackles the au courant theme of beautiful expanses of water hiding the potential environmental nightmare of oil-gushing disasters. He is a photographer of obvious skill and accomplishment, but his potent ideas can get lost amid his technique, which involves layers of photographic images, Japanese tissue paper, encaustic and sculptural elements. 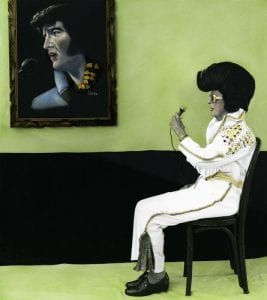 Birds of a feather, Aline Smithson and Maggie Taylor never met a wry juxtaposition or manic jolt of color that they didn’t like. Smithson’s hand-painted silver gelatin prints speak to the photographer’s past as a fashion editor: this is a lady who likes playing dress-up, in content and form. Her wacky images feature the artist’s mother in various guises: dressed as Elvis in an outrageous black pompadour (at left); garbed in feline coat flanked by kitty-cat wall art; done up in ’60s psychedelia. The intense, tinted colors can give these images the look of ’70s magazine advertising.

Taylor has a more surrealist, Magritte-meets-MTV bent. Sometimes spooky, sometimes over the top, her photographs feature Victorian children, floating trees, swarms of butterflies. The quirky little vignettes are often framed with velvet curtains or irises to enhance their theatrical and old-timey effect. As with Smithson, you often wish she’d turn down her color dial a notch or two, so the hues would better suit the antiquated quality of the work.