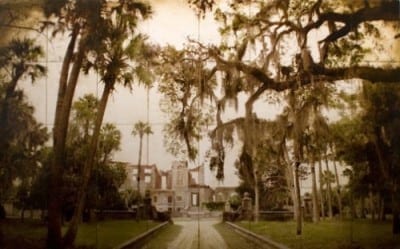 The appeal of “Summering at the End of Empire,” John Folsom’s exhibition at the Marietta/Cobb Museum of Art through July 3, is that it can be interpreted in radically different ways, depending upon one’s ability to be seduced or horrified by the Southern landscape and history. 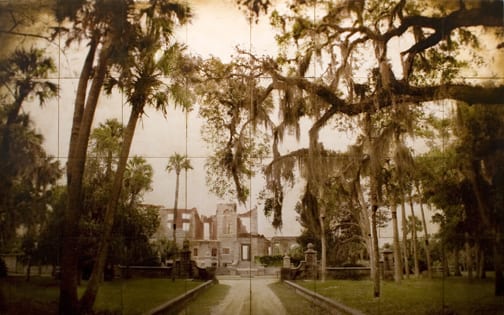 It is easy to succumb to a feeling of romance and nostalgia surrounded by Folsom’s enormous, wax-lacquered photographs. The images are often quite beautiful, with their sepia tones and focus on a seemingly untouched, Edenic landscape — the South of Spanish moss draping ancient live oaks, decayed plantations and the boggy green landscape of coastal Georgia’s barrier islands.

But they give me nightmares. The landscape that Folsom documents with such intensity of feeling looks like a “Blair Witch Project” trap. The roads seem to disappear into nothingness. Those looming live oaks look as if they might devour you once you begin the slow trek down their shaded path. The view from “Cumberland Island Cemetery” is of a salt marsh whose expanse suggests a watery grave. You can almost feel your feet being pulled into the muck. 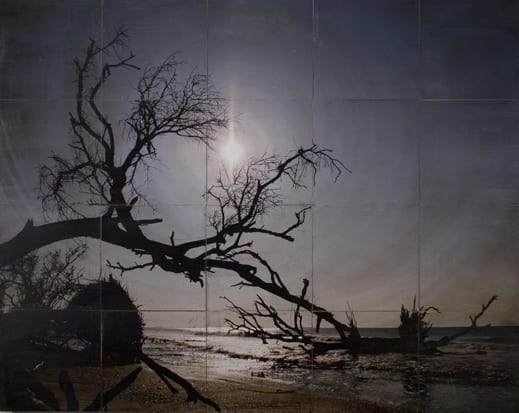 At times the landscape is as sapped of color as a sun-bleached bone, as if the sago palms, palmettos and other trees have been sucked dry of their life force. Linger too long and “they” might get you, too. There is something singularly enveloping and spooky about this place that you can’t help but imagine from a captive’s point of view, where even the dense mocking landscape seems to conspire toward further entrapment.

But Folsom also takes you out of the spell of the past in such works as “Gilded Portal,” of a freshly constructed, contemporary pergola on Cumberland Island that breaks the spell of a place both ancient and enduring that he works so hard to create.

Folsom’s contradictory focus is on a place at once dead and teeming with life. The ruins of the Dungeness Plantation that Folsom captures in “Summering at the End of Empire” (at top) have the pink cast of flesh that contrasts chillingly with the green-grey landscape that entombs a dead way of life. Buildings may crumble, but the ancient trees and waterways endure, witnesses to all that has come before and all that will come after.

Folsom translates digital blow-ups into a grid and affixes the segmented images onto wood. The pixilated images are then painted with oil and worked over with wax. The effect is both evocative and dangerously close to the realm of faux finishers and furniture picklers. Luckily, Folsom’s obsessive devotion to his subject matter redeems him. You feel taken to the place he wants you to go, guided along as this naturalist with a camera frets over conservation and burrows deep into the wild. 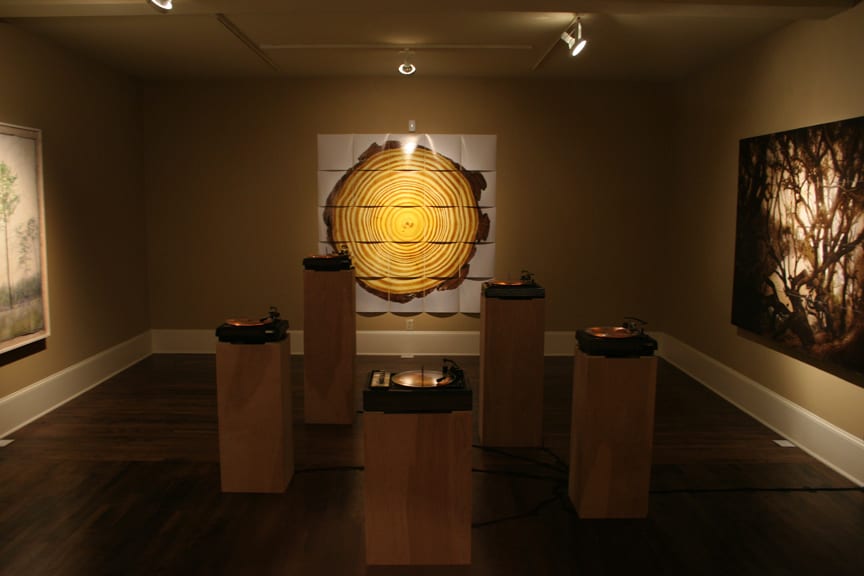 In one room of the exhibition, Folsom has assembled a gaggle of five vintage turntables set on wooden pillars at various heights (at left). Records spin like more haunted things, spilling out a soundtrack of palmetto bugs, storms, owls and frogs. It’s that peculiar damp, frantic cacophony of the South, as indigenous to the region as languor and mosquitoes.

The room is meant to evoke a cataclysmic natural phenomenon that occurred in 1816 and caused such a shock that trees the world over failed to grow a ring that year. Though the installation speaks to an environmental destruction larger than Folsom’s small section of the South, message is secondary to the drama. As is the case in so much of “Summering at the End of Empire,” the artist’s greatest power is a theatrical and hyperbolic rendering of nature that makes it seem like the most fascinating place on earth.