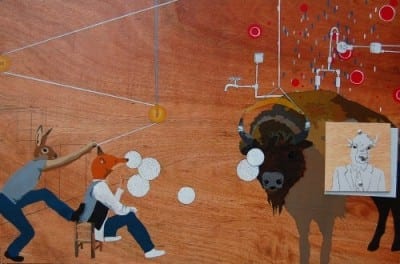 Meta Gary’s art is often compared to dreams, if only because much of her imagery comes from her own. But accounts of dreams are often of interest only to the dreamer, whereas the work in “Animal Instinct,” at Emily Amy Gallery through April 30, has fascinated nearly all comers.

Gary’s paintings on untreated wood do have a dreamlike quality, in that they present open-ended imagery. There is meaning here, but it’s pleasingly elusive, emotionally resonant but conceptually teasing. A raccoon wanders into a house’s entry hall in “When Human Hands Perform Human Tasks.” In “Such a Fine Fit” (above), a rabbit-headed figure in work clothes seems to impose some device on a seated fox-headed figure, while a buffalo to the right of them, partly obscured by a portrait head of a buffalo, stands beneath a confusing overlay of plumbing.

Many stories could be spun from these paintings, but they would mostly have to be invented, not extracted. Among the few things that approach allegory here are the jackdaws that plunder the triangular shapes of fractal figures to line their nests. In this show, the constituent pieces of descriptive mathematics are constantly being returned to the complex organic networks they are describing — the abstractions that give us technological advances are re-embedded in the animal instinct that underlies our emotional life.

Fractals give us a way of understanding the underpinnings of the physical reality to which we are constantly being returned, just as technology gives us a way of manipulating that reality. Hence the jackdaws are making their nest atop a pole carrying telephone and electrical wires in “It’s True You Can’t Fight It.”

But Gary’s work contains few such straightforward symbols. More typically, the imagistic leaps go in several directions at once, and the strands of possible meaning tangle delightfully. The hunter of single meanings here is in the position presented in “Let’s Try Again Tonight” (above), in which a rising cloud of smoke contains an immense range of overlapping animal figures occasionally overlaid with targets, none of which quite coincide with any of the creatures.

At least one piece, though, suggests an allegory of Gary’s practice. In “Taking Back the Days,” a figure reminiscent of the artist herself guiltily or mischievously conceals a stolen feather behind her back as she is confronted by an indignant peacock.