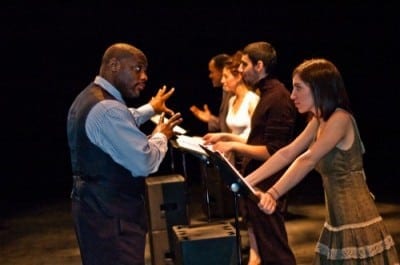 Few projects exemplify the notion of the university as an incubator of the arts quite like the biennial “Brave New Works” festival presented by the Playwriting Center of Theater Emory, which will run April 2-17 at various locations around the Emory University campus.

The festival brings together theatrical professionals and students to collaborate on innovative new works, which are not limited to the stage. Playwrights are matched with a director, actors and a production team and given a week to develop their scripts before a public mounting of their works in progress.

One of the most noted “graduates” of this program is Out of Hand Theater’s production of 2009’s “Hominid,” a collaboration between playwright Ken Weitzman and Dutch primatologist Frans de Waal. Highlights this year will include New York playwright Paul Carter Harrison’s musical “Goreé’s Crossing,” featuring the music of jazz and blues artist Olu Dara, and Atlanta playwright Margaret Baldwin’s “Without Which Nothing.”

Lisa Paulsen, director of the Playwriting Center, explained to ArtsATL how the festival works, some of the pieces involved, and why it has become a unique part of the Atlanta theatrical scene. 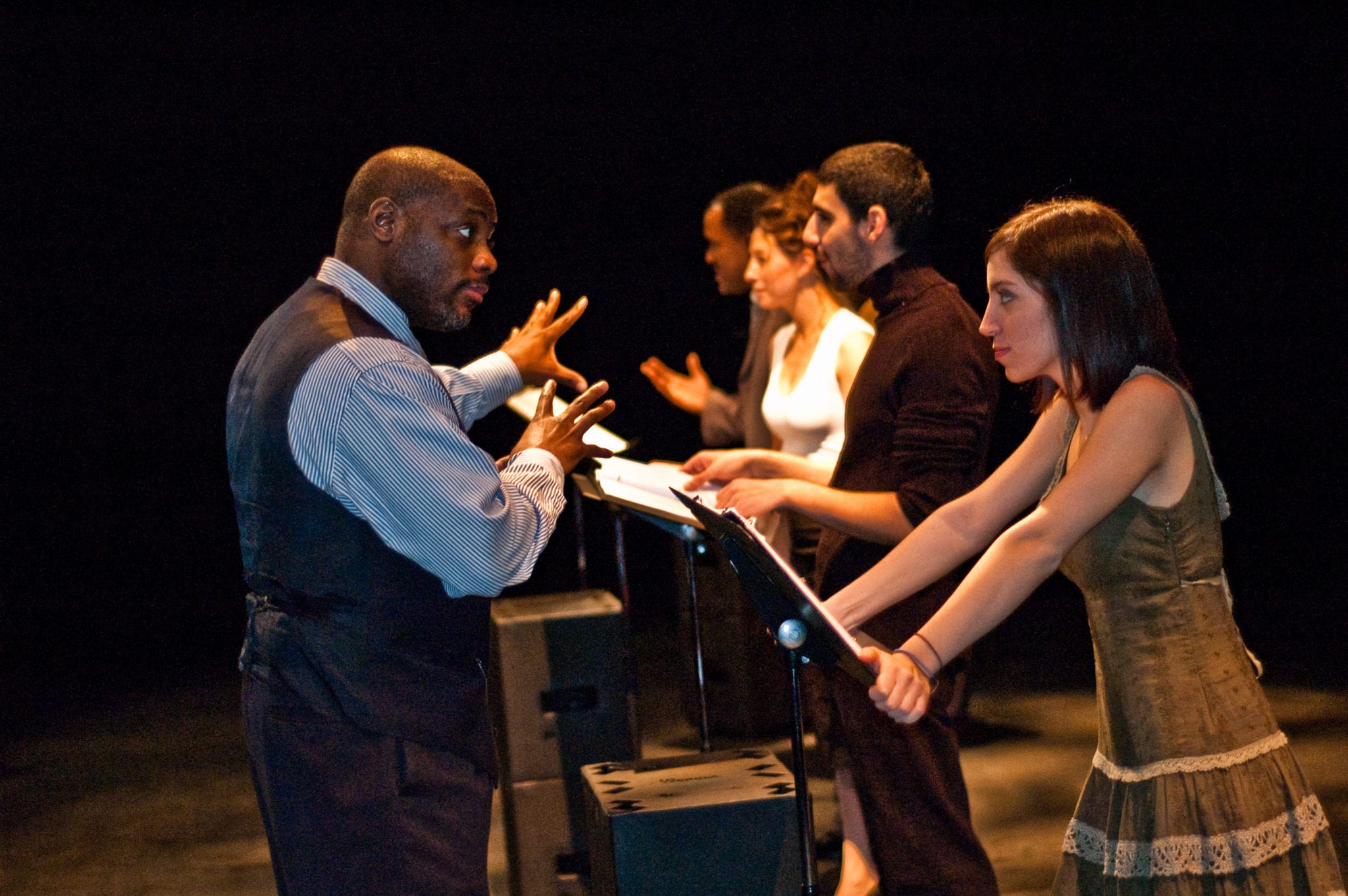 A high point for Theater Emory, from 2008: “The Day of Murders in the History of Hamlet” by Bernard-Marie Koltès. (Photo by Daniel Weiss)

Lisa Paulsen: Really, there is no set process. Sometimes a member of our faculty will introduce me to a playwright’s work and advocate for them to come. Thomas Gibbons brought his play “Silverhill” in 2009, in large part because Alice Benston [Emory ‘s resident dramaturg] had a particular interest in his work. We all benefited from her relationship to him. Or a playwright who has been here before will contact us about a new play that he or she thinks could use a workshop at Theater Emory. Other times, we want to explore a subject or theme and commission an artist or artists to explore it. We are creating “Louise Nevelson: A Life Assembled” for a conference titled “Creativity and the Life Cycle,” and there are a series of her works currently installed in the theater.

For “Brave New Works,” we look for a mix of Atlantans and national playwrights. We want to serve our own faculty as a laboratory for their projects; we want to work with both established and emerging playwrights; and we want the work to engage our students in a substantive way. We are particularly interested in innovative process. Because we are at a university that values research, we are able to engage plays at a more nascent stage of development.

ArtsATL: What, if any, interaction occurs between the national playwrights, such as Paul Carter Harrison, and the local playwrights  — Margaret Baldwin — and also the student playwrights?

Paulsen: Most of the playwrights work independently on their own projects. They do see each other’s work, when scheduling permits, and we share meals whenever possible. Ms. Baldwin will be speaking at a colloquium for theater students this coming week. At another colloquium, Paul Carter Harrison and Dwight Andrews will discuss Paul’s play and also his call for a better critical framework to discuss “black aesthetics.” Students are involved in every project, in some substantive way … as actors primarily, but also as assistant stage managers, directors and dramaturgs, and of course as audience for the presentation.

ArtsATL: How do the two different “camps” benefit from each other in this process?

Paulsen: The professional artists bring skills and experience, as well as provide models for what it is to have a life in the arts. The students are infectiously hungry to work and learn and grow — students ask great questions — and the professional artists are nourished by that. Nick Surbey was one of a team of writers to create “Spitting Game” in 2009. He was an Emory student at that time, but also working as a peer with this group of brilliant playwrights from around the country. And now, two years later, Nick is a graduate and we are reading his full-length play, “Infinite Country.”

ArtsATL: How did you get Paul Carter Harrison on board, and talk a little bit about his work.

Paulsen: We met him because his papers are being placed at the Manuscript and Rare Book Library at Emory. [Professor] Randall Burkett has been doing truly extraordinary work in gathering materials in African-American arts and literature. It became clear that Paul wanted to engage with the Emory community, over the next several years, and so Randall contacted us about a possible collaboration. Paul’s and Olu Dara’s work is powerful and beautiful, and we are thrilled to be working with them on it.

ArtsATL: Have familiar were you with Margaret Baldwin’s work before this?

Paulsen: This will be Margaret’s first work for “Brave New Works,” although I’ve wanted to work with her for some time. I first became aware of her because of the ambitious and unique projects she was creating at Kennesaw State University, with Karen Robinson, and admire the boldness and inclusiveness of her process. I was delighted at the success of “Night Blooms.” We’re lucky to have her in Atlanta and delighted to finally welcome her to Emory.

ArtsATL: On that note, provide some background on your relationship with Out of Hand Theater.

Paulsen: Out of Hand Theater was founded by Emory alums, and their work and process have been deeply influenced by a workshop they took with Anne Bogart, when they were students. We’re also awarding Anne Bogart the Pat Miller Playmaker Award this year, and she will be here to receive it on April 9, immediately following the reading of “Without Which Nothing.” [Professor] Vincent Murphy commissioned them to create “30 Below” at Emory, one of their early projects, and on it has gone. The ties are strong; [co-Artistic Directors] Ariel de Man and Adam Fristoe both teach classes for us. The students are compelled by the physicality of their work and the collaborative writing style they employ.

ArtsATL: How did “Brave New Works” help develop “Hominid,” which seems such an integral example of this partnership?

"Hominid," by Out Of Hand Theater and Ken Weitzman. (Photo by Daniel Weiss)

Paulsen: “Hominid” is a great example of why play development at a major research university makes perfect sense. Tim McDonough, when he was artistic director for Theater Emory, got excited about the research of Frans de Waal at Yerkes. We decided to commission a play based upon his research with chimpanzees and knew that it would be a highly physical piece. So he approached Out of Hand Theater to work on it, along with playwright Ken Weitzman. It was developed during “Brave New Works” 2009, with a three-week workshop titled “The Fifth Great Ape.” Theater Emory produced it the following year, retitled as “Hominid.” Out of Hand has continued to develop and promote the work since. It’s a beautiful story of a play coming into being: de Waal’s research at Emory, Theater Emory, Ken Weitzman (who was teaching at Emory at the time), Out of Hand (Emory alumni), and so on.

ArtsATL: Are there any other highlighted performances you’d like to mention?

Paulsen: “6×6” is a series of student plays. Each is 15 minutes long; each is limited to one actor. John Ammerman, our current artistic engagement, conceived the project and will produce it at Theater Emory next year. This is an extraordinary opportunity for these student writers — we have a new playwriting major at Emory — to really refine a piece of dramatic writing, and then to see actors and directors engage with it and ultimately see it fully produced. Jim Grimsley, from creative writing, has been a vital part of this project, as have the theater faculty who are mentoring the writers. I love to see student academic work taken into the professional laboratory of Theater Emory.

“Kites,” an aerial videography, by Kent Wall, is a project that began as an idea for a documentary film, now conceived as an installation. It’s not a play in any sense, and it’s seemingly an odd match-up for a theater. However, Kent’s goal is to explore ways to break away from traditional projection onto a traditional screen. He’ll use a few actors, but it is mainly our designers and technicians who are his principal collaborators. I’m excited to stretch out of our normal way of supporting work.