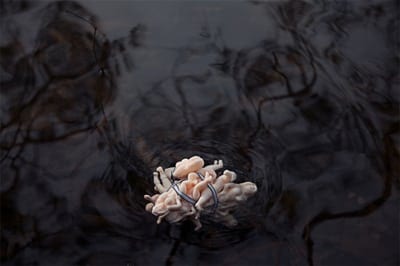 Marcia Vaitsman asserts that the enigmatic photo-based works in “Study of Strange Things,” her solo show at Solomon Projects through October 1, seem to “belong to anybody else but me.” The artist’s professed estrangement from her own images adds yet another level of mystery to an already delightfully peculiar group of works. Vaitsman’s photographs, light boxes and video installation grippingly transform commonplace materials and objects into the exotic and unusual.

“Wool Expanded,” one of the photograms in her “Binaries” series, gives an otherwise unremarkable fabric an ethereal, ghostly aura. In “Zebra Enclosed,” an image of a small zebra made out of hair enclosed in what looks like a box, Vaitsman makes use of the haziness of the photogram to suggest the atmosphere of a half-forgotten memory or dream.

Vaitsman’s photograms are by definition “camera-less” prints. Her actual photographs, on the other hand, raise interesting questions about their own status as photographs. The obvious care with which Vaitsman has assembled the tiny tableaux and mises en scène that appear in the pictures obliges us to ask, why photography at all? Why not just present these works as installations? The cryptic “Package on Asphalt” (top image) depicts a large piece of cloth draped and bound over a concealed object, which radiates a subtle orange glow. One of many works with Surrealist parallels, it is reminiscent of Man Ray’s famous 1920 photographic homage to Surrealist poet Comte de Lautréamont, “The Enigma of Isidore Ducasse” (above), sans the literary underpinnings. The truly arresting “Impossible Bodies” (at left) converts a children’s toy into an undeniably eerie anatomical composition. A photo of a ball of tangled and enmeshed body parts floating against a swirling black-and-charcoal background, it is a teasing, though perhaps unintentional, reply to Hans Bellmer’s more sinister (not to mention misogynistic) “Poupées” of the 1930s.

Vaitsman’s wonderful attention to the surfaces, textures and lighting of these “scenes” also pushes photography toward what she calls “a real medium of abstraction.” The video “Study of Strange Things” builds on this idea by hypnotically cycling through the images from the photographs along with other abstract shapes, bright colors and starlike images. Iridescent and lifelike, the images in the video at times evoke an undersea world of starfish, jellyfish, seahorses and coral, recalling Jean Painlevé’s marine films of the ’20s and ’30s. As free of melody as the video is of narrative, the accompanying score, by Vaitsman and Christiano Moro, composed of ambient sounds, squeaks, chirps and a drone, nicely complements the dreamlike imagery.

In both her photographs and video, Vaitsman creates a magnetic inscrutability, which channels the spirit of Surrealism while remaining distinctly her own.