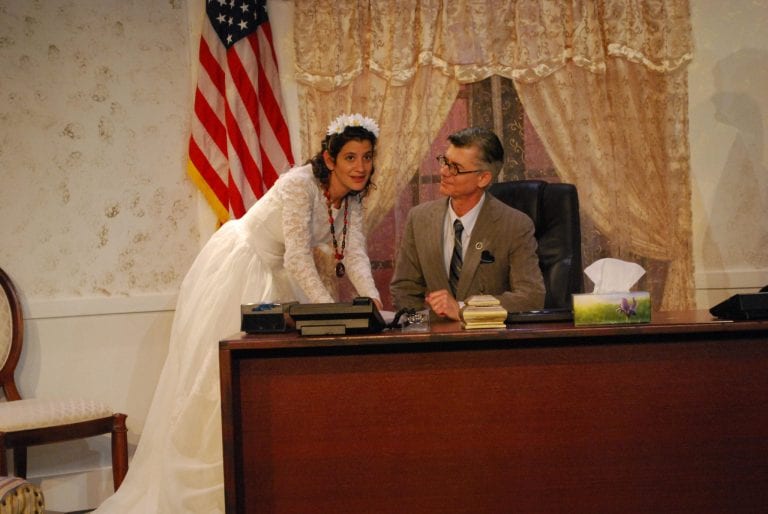 Process Theatre takes a bad script and makes it worse with a misguided production of David Mamet’s political satire November through October 9.

The play is set in the Oval Office on the eve of an election that the sitting, unpopular president (Larry Davis) is certain to lose. The president, however, refuses to go quietly; he’s both desperate to hang on to power by raising funds for his broke campaign by any means necessary and by using the equivocating, prettily inspiring speech provided by his doormat progressive speech writer Bernstein (Amanda Cucher).

November seems miles away from Mamet’s best and most familiar work. None of it is remotely believable — I wasn’t even interested in the depiction of the Oval Office as a satirical idea about the presidency. The notion that even a ceremony as innocuous as the annual presidential pardoning of the turkey at Thanksgiving might be the occasion for some behind-the-scenes power-broking is moderately amusing at best, but it becomes the central focus of the play and the schtick wears mighty thin.

Political satire is tough, and it dates quickly. The expiration date on November, I’d place around November 2013. Same-sex marriage is raised as an explosive political issue, which doesn’t even interest in a time-capsule way. It’s just a constant reminder that the play is taking a satirical look at a political world that’s past.

Mamet’s regressive macho purpose here seems to be encapsulated in the president’s attitude toward his speech writer, delighting in sacrificing a few sacred politically correct cows in front of her, mansplaining that her bleeding heart language of apology has its uses merely for manipulating the masses, but it’s meaningless piffle when it comes to the corridors of real power.

Process Theatre attacks the script as if it’s a Carol Burnett farce. Davis whines and pouts throughout, playing the president as an infantile brat. The idea of the president as a wimpy, whiny spoiled child might pass muster as a 10-minute sketch (though I have my doubts) but it certainly grates as a two-hour play.

Between his tantrums, the onstage bickering cranked up to 11 and Cucher’s phony sneezes and nasal voice (the character has an unfunny cold), the play’s soundscape could be irksome in and of itself. Adam Bailey as the beleaguered chief of staff fares slightly better, but the action leaves him little to do other than stand onstage and act frustrated, put upon and forbearing, which, considering the circumstances, may not have been much of a challenge.

As Act II drew near its close, I imagined that the show’s list of sins was likewise near completion, but the worst was saved for last. The play features the late entrance of an insulted and vengeful Native American chief (Al Dollar), a somewhat questionable move on Mamet’s part already, though it does connect the action and the malfeasance we’ve witnessed to the grand arc of American history and power.

But the show goes the whole nine yards with a beads-and-feathers Big Chief Tomahawk minstrel-show-level comic stereotype of a Native American. I’m prepared to label it offensive, but that doesn’t quite capture things. It’s simply baffling that theater-makers, including Mamet, could live in the modern world and be so unaware that this might be an erroneous use of the stage. And on top of that, it’s not even funny.